Read Chapter One of My Fake Love Affair… – Ali Parker

Read Chapter One of My Fake Love Affair… 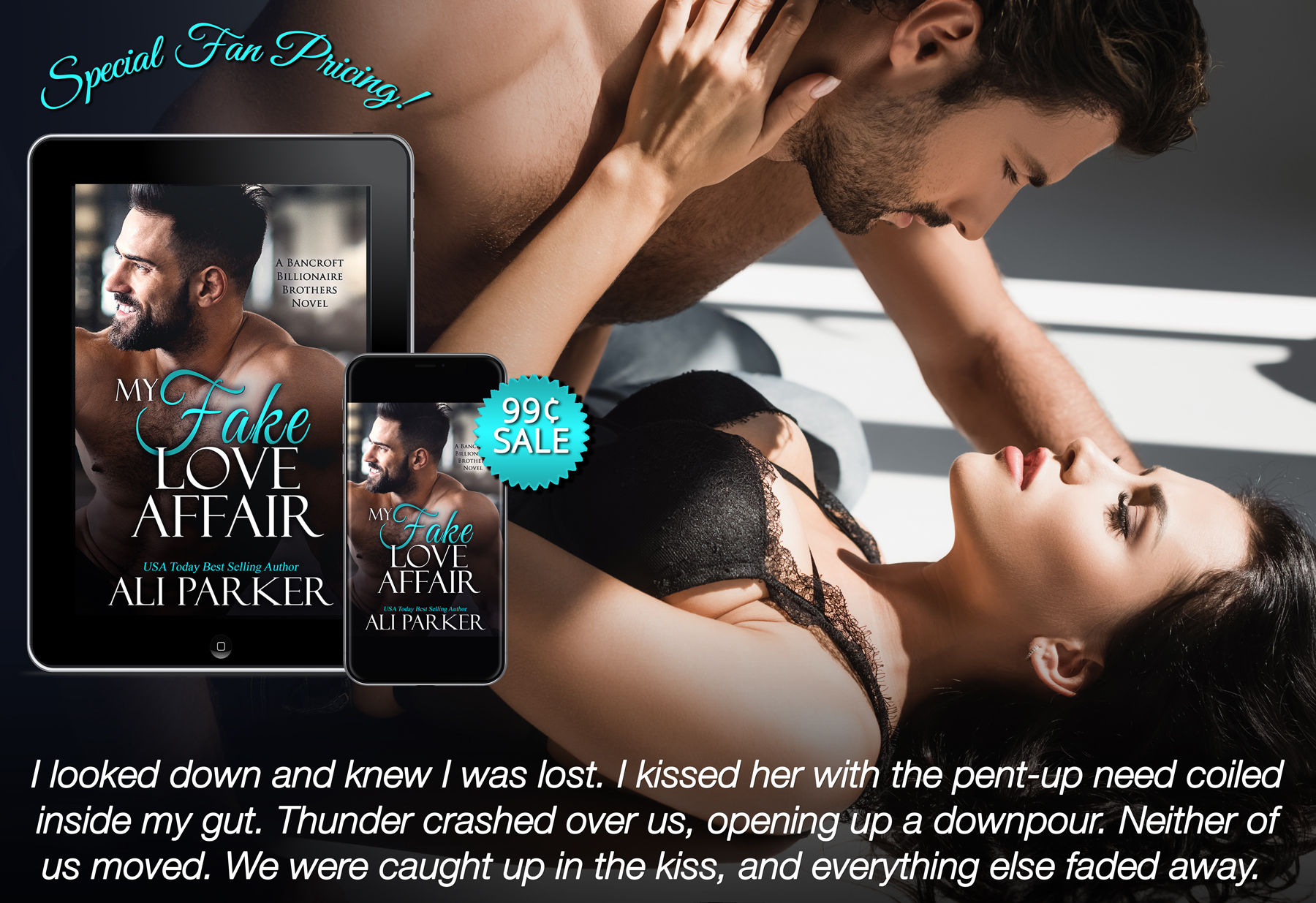 “Here you are, Miss Lore,” the flight attendant said as she handed me my cup of green tea.

“Do you need anything else? We’ll be landing in about fifteen minutes.”

She walked away and took her seat at the front of my private jet. I stared out the window as the jet glided across pillowy clouds. It was nice to be going home after a busy few months. I missed New York. I missed the smell and the crowds. I even missed the abrasiveness of my fellow New Yorkers.

Penelope, my always nervous, very high-strung assistant, got up from her chair and moved to sit across from me. “I’ve been working on your schedule,” she said. “It’s hectic, but I’ve made it work.”

“I hope you’ve given me some downtime,” I told her. “I’m fried. The last few weeks have left me exhausted.”

“You’ve got a few more meetings,” she said without pausing. “You’ve got the meeting with the board of the cosmetic company. I spoke with Stephanie, and she’s still working on getting those end-of-year reports together. Apparently, there were some problems with accounting. She promises she’s got it all worked out.”

I was barely listening. I was seriously hitting max overload. I knew the phrase about money not being able to buy happiness. It bought me some happiness and a whole lot of stress. I felt like I was on a hamster wheel and couldn’t get off. The more money I had, the more I needed to make. “Needed” was the wrong word. I didn’t need the money, but it was like being on a conveyor belt, and I couldn’t get off. It just kept going.

“Fine,” I said without being entirely sure what she said. She’d tell me at least twenty more times. I would listen then.

“Um, there’s something else,” she said nervously, which was her default.

She worried her lower lip. “Um, well, it’s a concern.”

“I don’t care,” I said. “They can be pissed. They didn’t have to date the asshole. Did PR put out that statement?”

“They did, but Brock isn’t exactly helping the situation,” she said.

“Absolutely. Anything. What do you need?”

“The next time you see me chasing after a man that is hot, wealthy, and famous, steer me in the opposite direction,” I told her. “No more celebrity men. I refuse to have my name blended with another man. I refuse to be a photo op. I’m done with all of that. Never will I allow myself to be in a high-profile relationship again.”

I sighed and put my cup of tea down. I knew it was going to be like this when I returned home. Brock was from New York, a famous singer with an ego the size of Texas. I had been blinded by the lights at first. He’d been a force. It was exciting to wait in the wings of his concerts and have him sing directly to me, and the fans ate it up. I was too naïve to realize that was why he was singing to me. He wanted the boost to his celebrity. I was a prop.

She looked down at her tablet. “Security has been filtering through the hundreds of death threats.”

I winced. “I can’t believe his fans want me dead. What the hell is that about? Aren’t people allowed to break up?”

“Brock did an interview and actually cried,” she said dryly. “He’s using this breakup to boost his popularity.”

“My god,” I groaned and shook my head. “I should sue him. I should demand half of whatever he makes from the popularity boost he got from dating me.”

“What did security find?” I asked. “Are any of the threats credible?”

“No, but they are going to be meeting us at the airport,” she said. “Only because they think between paparazzi and the haters, it can get chaotic.”

“They think it would be better if you were safe, just in case,” she insisted.

“Am I still being canceled?” I asked with disgust.

“There are some so-called demands, but I don’t think it’s going to go anywhere,” she assured me.

“My financial advisors say I might take a hit first quarter, but it’ll be minimal,” I said with a disgusted sigh. “I can’t believe people are actually boycotting my businesses because I broke up with a man that wasn’t even really my boyfriend.”

“He wasn’t your boyfriend?” Penelope asked with confusion. “You were together for six months.”

“No, we were together for about a month before he went on tour and I had to go on my business tour,” I said. “I don’t believe for a second he was faithful to me. We were only together because we didn’t have time to officially break up. I hate that everyone thinks they know who we are because they’ve seen our pictures on the news.”

“It’s part of being a celebrity,” she said while tapping out a text message on one of the three phones she carried.

“You are now,” she said and put the phone down. “You’re rich, beautiful, and you were dating one of the hottest artists in the world right now. You are now a celebrity.”

“Will it be over soon?” I asked with a sigh. “I don’t want to be a celebrity. I just want to run my businesses, go into a bar and have a drink, and go shopping without everyone screaming at me.”

“Most people who have achieved celebrity status don’t want to lose it.”

“Definitely not,” she said with a laugh. “You win the lottery at twenty-one, which doesn’t happen. Then instead of blowing through your money, you invest it and quadruple your net worth.”

I smiled at the recap of my life. I was proud of myself. But I was still Rachel from the block. Not Jenny’s block, but my own block in a Long Island suburb. Although, we’d moved off the block. My dad and I had moved to Manhattan, and even though he claimed he hated it, I knew he secretly liked the town house I bought him.

“You miss your dad.”

“I do. All the money, fame, and success means nothing without him,” I said. I knew I sounded cheesy, but it was true. There was nothing more satisfying than sitting in my pj’s with a hot pizza, a twelve-pack of beer, and watching America’s Got Talent with my dad. I was twenty-seven, but people always teased I lived like I was seventy.

There was an alert from one of the many social media accounts Penelope monitored. She reached for the other phone that she used specifically for those accounts, and I watched her face twist into worry and frustration.

“These people,” she muttered before putting the phone back in the bag she carried everywhere.

“Let me guess. Another trending hashtag demanding my demise?”

“Just don’t get on any social media,” she muttered.

“It’ll blow over,” she assured me.

“I don’t care,” I said with a sigh. “I just want to go home. I made all this money because I worked my ass off. I never bothered anyone. People loved my businesses before I met Brock. It’s not like my products or services changed. I don’t understand how people can think otherwise. Talk about a leap.”

“It’s just their way of hitting you back,” she said. “They’re mad at you for dumping Brock Keys.”

I rolled my eyes. “Ridiculous.”

The jet began its descent while Penelope prattled on about this and that. I missed the days when my dad could pick me up at the airport. He’d be waiting for me with a smile on his face and greet me with a warm hug. It had been eight weeks since I got one of his big bear hugs. I never realized how much I missed those hugs until my life imploded with a single headline. From that one headline, it turned into a free-for-all.

The jet hit the tarmac, a slight bounce before it raced toward the building of the private airstrip. The jet slowed to a taxi before coming to a stop. I was still in a safe zone, but I could only imagine what waited for me.

“Security will meet us on the tarmac,” Penelope said again. “You just go. I’ll make sure your bags and stuff get to your penthouse. I’ll get your purse, everything.”

“What?” I asked with shock. “I can carry my purse and laptop.”

She shook her head. “Security said no. Someone could grab the purse or bag.”

“No,” she said with zero conviction.

“How many more death threats did I get?”

We both stood and waited for the door to be opened. Now, I was nervous. I assumed it would be the usual hubbub with a few people holding signs and paparazzi snapping pictures and screaming at me. I stepped out the door and onto the steps, and I heard them. My eyes went to the chain-link fence that was holding back a throng of people holding signs and screaming my name. I didn’t miss the insulting messages.

“Go,” Penelope said from behind me. “I’ll get your stuff to your place.”

“I need my purse,” I insisted. “I’m going straight to my dad’s house.”

She looked nervous. “Okay, but please be careful.”

“I’m fine,” I said with irritation. “I can carry my own damn purse.”

She handed it over, and I walked downstairs with my head held high. I ignored the vile words being hurled at me from about fifty feet away. I had on my big dark sunglasses to shield my eyes. I wasn’t going to give the paps a money shot. Security guards were on either side of me as they rushed me across the tarmac and into the waiting limo with blacked-out windows.

“Thanks,” I said to the man that hopped in the front passenger seat.

“Go,” he barked at the man behind the wheel.

“There’s a crowd outside the gate,” the guard said. “Slide down in the seat.”

“Slide down,” he said in a stern voice.

That’s when I realized he was afraid they might do something more than shout. I scooted down in the seat as the car moved slow and then stopped. I could hear the shouts. People pounded on the car as the driver navigated his way through the crowd.

“What the hell is wrong with them?” I asked aloud. I didn’t expect an answer. There wasn’t any rational answer to give.

“Your assistant gave us an address in Manhattan,” the driver said. “Is that true?”

“We made plans to take you to your home in Rye,” he said.

The security guard looked over his shoulder at me. “Are you sure?” he asked.

“Yes. No one knows where he lives. At least they didn’t before.”

“I’ll send someone ahead to scout the area,” he said.

“Thank you.” I relaxed in the seat and watched as another private jet started to descend into the airport.

The driver took a sharp turn, which slammed my head into the window. “Sorry, miss,” the driver said. “We’ll need to lose these guys before we get into the city.”

“I trust you guys to get me there safe,” I said and was so glad Penelope had the foresight to get security set up. I would have never been able to drive with this craziness. I glanced out the window, surprised to see a man on a motorcycle taking pictures of me in the back seat. Or attempting to. I hoped like hell the black tint hid my face.