Read Chapter 1 of Work Me Good 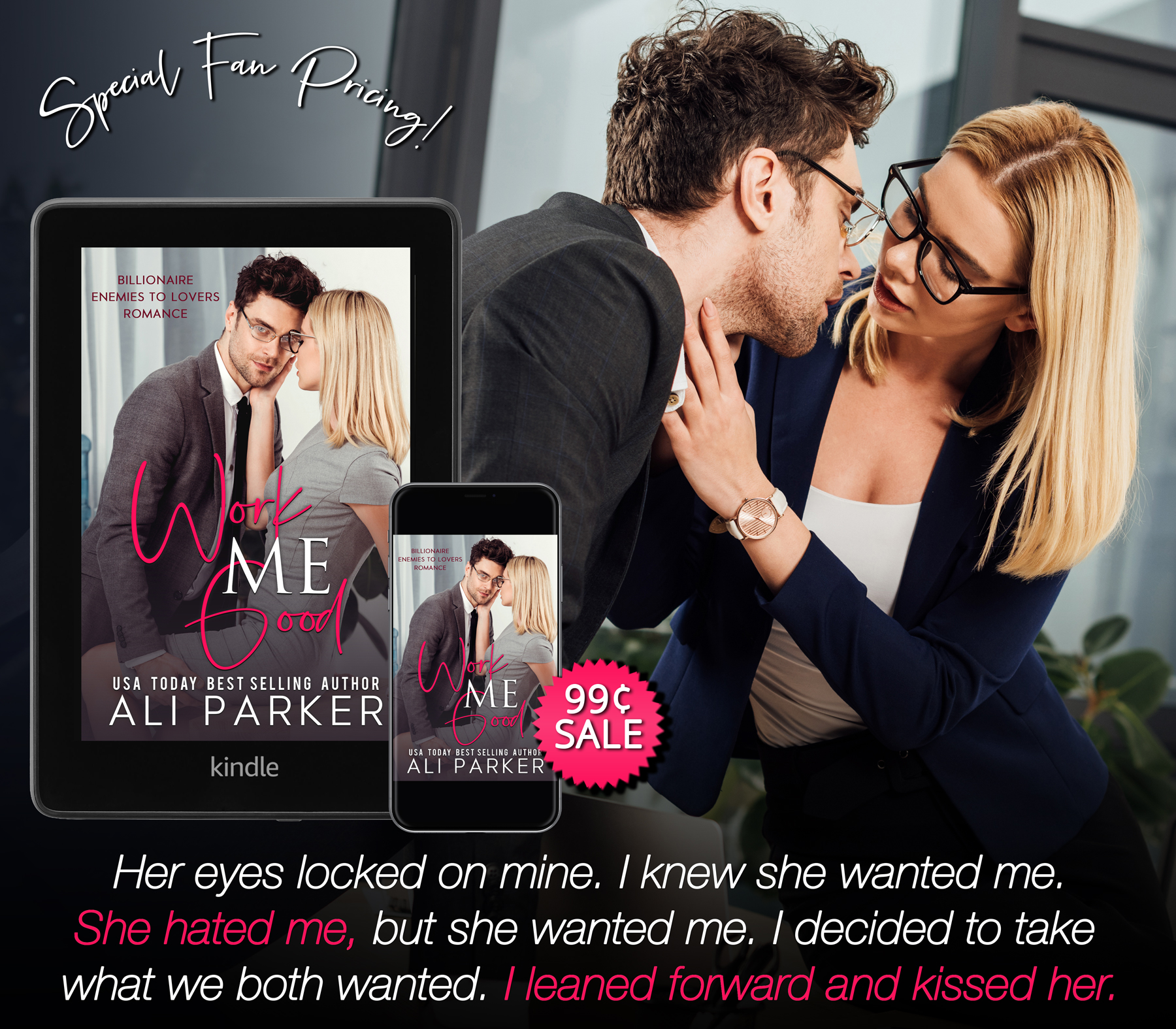 I checked the time on the small clock sitting on my dresser. How was I always late? No matter how early I got up, I was always in a rush. I put on my earrings while walking into the kitchen. “Jace!” I said. “Jace, are you up?”

I yelped and jumped back when I saw him standing not six inches in front of me. “Oh! You scared me! I didn’t see you.”

He dumped cereal in a bowl. “I’m not invisible.”

I laughed and ruffled his dark hair. “No, I guess you aren’t.”

I grabbed the milk from the fridge and poured it for him.

Truthfully, I wanted to avoid cleaning up spilled milk. He was eight and just a little small for his age. I had no doubt he was going to end up being just as big as his father one day. Unfortunately, he hadn’t quite hit that growth spurt yet.

“Can I go to work with you?” he asked. He stood at the counter and took a bite of cereal. Milk dribbled down his chin.

“Why would you want to go to my boring work?” I asked and popped a K-pod in the machine.

“You have to go to school so you can get smart and get a job when you are a grownup.”

That didn’t make him happy. He carried his bowl to the table and flopped down. “I don’t want to get a job.”

I smiled and shook my head. “Nobody does, but it’s just what you do.”

I didn’t think the standard excuse of because I said so was going to work. “Because you need to pay a mortgage and buy food. You need electricity and water and maybe even a car.”

“I’m just going to live with you,” he said matter-of-factly.

I wasn’t going to burst his bubble that I wouldn’t be around forever. “All right, finish eating. Joss is going to be here any minute.”

There was a knock followed by a series of little knocks. I went to the door and opened it for Joss and her daughter, Caitlyn. Caitlyn and Jace were the same age but not in the same class unfortunately. I would have loved for him to have a friend in class.

“Cereal is on the counter,” I said as she walked by, heading straight for the kitchen.

“I’m sorry,” Joss said with a shake of her head. “She ate a pop tart. She just likes your cereal better. I will buy you a box.”

“Don’t worry about it,” I said as we walked into my kitchen that was flooded with morning sunlight. “Do you want coffee?”

I nodded. “Thanks for taking them again today. I swear I am going to start picking up the slack. I just feel like I’m running at Mach speed all the time.”

“It isn’t like I have anything to do,” she answered.

“You have a lot to do. Working from home is no joke.”

“But my schedule is flexible,” she said with a laugh. “Are you guys getting busy?”

I nodded. “I always encourage my clients to get a jumpstart on their taxes. I would prefer they start in May or the minute after their taxes are filed. Do you think they would ever listen?”

“No one wants to get a jumpstart on taxes,” she groaned. “They suck.”

“But they don’t go away if you ignore them.”

I wasn’t really a CPA. I was, but I rarely did anyone’s taxes. I was a tax director, which meant I did everything when it came to planning taxes and how to best manage the tax burden of a company. I had employees that did the paperwork.

“Jace, don’t forget to give your teacher the envelope in your backpack,” I told him. “You have to turn in that slip.”

Joss smiled at the kids. They were talking and shoveling cereal into their mouths. “Don’t you wonder when they turned into full-grown kids with personalities and attitudes?”

I slowly shook my head. “When they are keeping you up all night, all you can think about is the day you can put them to bed and go to sleep for eight hours. I don’t think any new parent realizes that every step forward on the road to independence is a step away from you. I miss my baby boy.”

“Me too. Do you ever think about having more?”

I looked at her with wide eyes. “I’ve heard there is a trick to getting one of those.”

She laughed, her brown eyes full of warmth. “I mean if you were to ever have a man in your life again.”

I shrugged. “I honestly don’t know. I’m thirty-two and very single. I used to think I was going to have at least two kids but now it doesn’t really seem like it’s in the cards. It would be different if I was married or had a steady boyfriend. What about you?”

“I want more, but like you said, that requires a man.”

I held up a finger. “Technically, it doesn’t.”

She curled her lip. “My biological clock isn’t banging that hard. I’m not going the turkey-baster route just yet. I’m sure once my little pumpkin hits thirteen, I’m going to be ripping out my ovaries and calling it a day.”

She clapped her hands. “Scarf that cereal down, guys, the school bus is leaving in two point two minutes.”

I smiled as I walked away. There was nothing that got by them. I pulled on my heels, tucked in my blouse, and made sure there was not a speck of lint on my black pencil skirt. I insisted my team be dressed for success and I always strived to set a good example.

I walked back into the living room. I didn’t dare give Jace a hug. My ability to hug him in front of witnesses had been halted at the start of third grade. I still got to hug him on some special occasions.

“Have fun today, buddy,” I told him and handed him his backpack. “Don’t forget—”

I touched his shoulder and offered a smile. I stared into those pretty eyes that reminded me of a man I thought I loved. I loved my little man more than anything in the world, though. “I’ll see you tonight” I said.

I waved as they walked out the door. I swore every day he grew a little more. My little boy was not so little anymore. I shook off the melancholy that always arose when I thought about the passing time. I often wondered if I was doing the right thing by raising him alone. He needed a father, but as it turned out, there were few qualified applicants. If I couldn’t have the best for him, I didn’t want any.

I grabbed my purse and briefcase and walked out the door. I hit the button to unlock the door of my Nissan Maxima. “Good morning, Mrs. Benson,” I said with a wave to my neighbor.

“Have a nice day,” she said before disappearing into her house.

I loved my neighborhood. I started the car and headed down the road. I missed the short commute to work when I lived in the city, but when Jace was three, I realized he needed a yard and a little room to breathe. I bought the house in Brooklyn and never looked back. I didn’t mind a longer commute.

When I got to work, I immediately felt something was off. I walked past the cubicles with people working already. I made my way to my office and was just about to go in when my boss, the owner of our firm, called my name.

That was never good. “Sure.” I put my briefcase and purse in my office and walked to his that was just a little bigger than mine. “What’s going on George?” I took a seat without invitation.

He looked uncomfortable. I wasn’t the least bit concerned I was going to be fired. I was very good at my job and our business was successful. Mostly.

“I want you to know you have been the greatest employee I have ever gotten the pleasure to work with. You always give it your all and I know I can depend on your honesty and integrity.”

“I’ve called a meeting,” he announced.

“Ten minutes in the conference room.”

Now I was concerned. “Is this about the Bonner account?” I asked.

He smiled, making the wrinkles at the corners of his eyes deepen. “No. That situation was ironed out.”

“Yes. I just wanted to let you know how much I’ve appreciated working with you.”

I frowned but decided to just wait it out. “Okay, do I need anything for the meeting?”

Now I knew something was up. I went back to my office to check my emails really quick. I didn’t see any clues there. Curiosity and nervousness were creating quite the stomach discomfort.

I followed the rest of the CPAs and account managers into the conference room exactly eight minutes later. George was standing at the front of the room. I swore I saw a bead of perspiration trickling down the side of his face. This was not good.

My mind raced with the many possibilities the meeting could be about.

“Everyone, I know you’re all wondering what this is about,” George started. “I’m just going to come right out and say it. We’re being bought out. I’ve sold the company and I am headed to Florida to enjoy my glory years.”

There was a silence that fell over the room that was so thick and heavy, I could actually feel it weighing on my shoulders. After the silence, the room erupted into conversation and low murmurs as everyone digested the information. My mind raced as I calculated my savings and how many mortgage payments I could make until I lost my house. I could find a new job, but how long would it take?

“Are we out of a job?” someone asked.

My ears perked up and my gaze focused on George. “No,” he answered. “Everyone will keep their jobs. Nothing changes but the name on the checks. Same company, same clients, just a new owner.”

I wanted to believe it. He looked like he was being honest. I knew how these things were handled. Promises were made, and a few months down the road, those promises were canceled.

“No, his name is Nash Aarons,” George answered.

The buzzing in my ears grew louder and blood rushed from my face. No way. No way could it be him. It was just one of those strange coincidences. Same name, different people.

“Do you know this guy?” one of the CPAs asked me.

“You look like you know the name. Is the guy bad?”

I looked her in the eyes. “He will destroy this company, given the chance.”

I nodded. “Oh no is an understatement.”

“Look, I know everyone is worried,” George said. “Let’s give the guy a chance. He’ll be coming in at the end of the week to meet everyone and check out the operational side of things. It would be nice for everyone to put their best foot forward. We want to shine for him. I want to hand him the company he bought.”

George was worried. I could see it on his face. He should be. This was not good news. George had to know we were all in jeopardy of losing our jobs when the new owner ran the company straight into the ground.

He was going to be sipping Mai Tais and playing golf and we were all going to be subjected to Nash’s horrible habits.