Read Chapter 1 of My Brother’s Girl 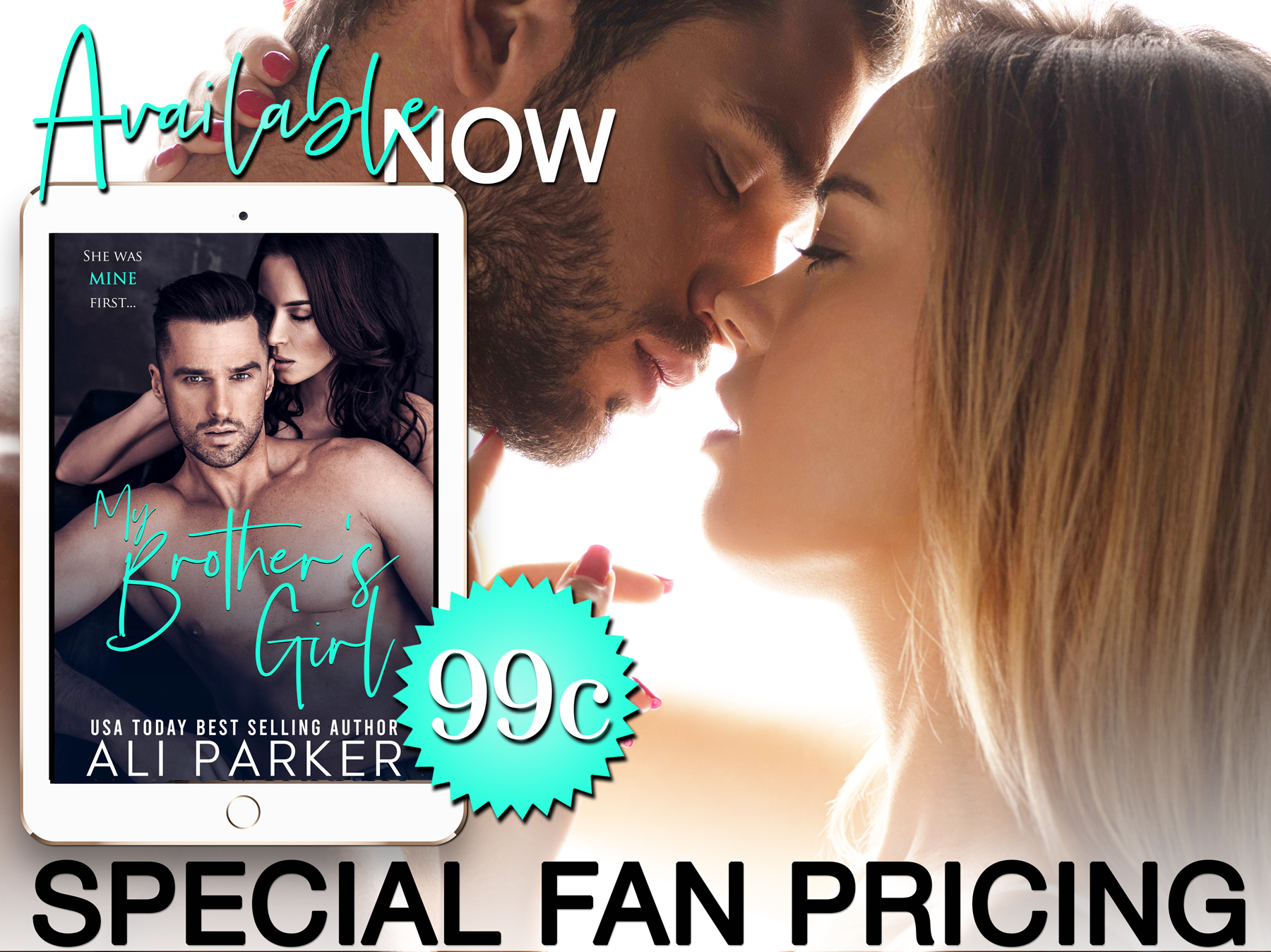 Check out Chapter 1 of My Brother's Girl...

“Everything is going to change after Friday night, isn’t it?”

I glanced at my own reflection in my vanity mirror. Over my right shoulder, my best friend Dana lounged flat upon her belly on my pink floral bedspread with her ankles crossed behind her. Her anklet, a dainty silver chain with two interlinking hearts, glinted in the sun streaming through my bedroom window. It was the same anklet as the one I wore. Each one might have been a little tarnished in certain places. They weren’t the best quality but neither of us had taken them off since our birthdays two summers prior.

I sighed as I jabbed my mascara wand into the tube in a desperate attempt to retrieve more product lingering at the bottom. “Yes, it will. But that’s not a bad thing.”

“Easy for you to say.” Dana rolled onto her back and sighed dramatically at my ceiling. “You have a plan. You always have a plan. And you have Caden.”

“Don’t sweet talk me. I’m serious. Where did the time go? I’m not ready to graduate. I want another year of high school.”

I shrugged and swept my mascara over my lashes. “I guess. But we’re ready. Whatever comes after this will be better than everything before. I can feel it in my gut.”

Dana scoffed, sat up, and swung her legs over the bed. “Oh please. That’s not intuition. That’s love. And only one of us is lucky enough to be in love right now. You and Caden are going to have all year to lay around on the ranch and make out and—”

“We’re going to do more than make out.”

Dana paused. She cocked her head to the side like a labrador and her long pastel-blue feather earrings grazed the tops of her shoulders. “Come again?”

I smiled at my own reflection. Glossy pink lips. Tousled blonde hair. Bronzed cheeks. Dramatic lashes. Simple and summery and just right for tonight’s occasion. “I think it’s time Caden and I take the next step.”

Dana scrambled off the bed. She was at my side in a matter of seconds, grabbing me by the shoulders and turning me to face her. “Does that mean what I think it does?”

My cheeks burned and my palms began to sweat just at the thought. “I want to give Caden everything. He’s my person. He’s always been my person. And I know he feels the same way.”

“I thought you were waiting for marriage?”

“I was, but Caden and I are going to get married. Everyone knows it. My parents. His dad. You.”

“You define that as everyone?”

“Fair.” Dana smiled. Then she padded around my chair to crouch down on my other side. She balanced on the balls of her feet, a habit she’d had ever since grade school ballet class. “You’re going to be smart about this, right?”

I blinked at her.

Dana licked her lips. “Look, not that I’m an expert on the subject or anything, but first times aren’t all they’re cracked up to be.”

“By not an expert, you mean you are also a virgin and have no clue what to expect?”

Dana giggled. “Yeah. Exactly. But I paid attention in sex ed. And you know my mom. Education is—”

“The best form of contraceptives,” I finished for Mia. I’d heard her mother’s speech a thousand times over. I didn’t disagree. I was just tired of the same old shtick. “Yes, I know your mom.”

“Then I don’t need to tell you to make sure you have a condom.”

I chewed the inside of my cheek. “I don’t have any. Why would I have any?”

“Well, seeing as how Caden probably wasn’t expecting to pop your cherry tonight…”

“Oh, don’t be a prude. If you can’t handle the expression pop your cherry, you definitely shouldn’t be having sex.”

I winced. She made a fair point. “Continue.”

“Caden has no idea this night is coming so you shouldn’t leave it to him to come prepared. I doubt he’s been carrying a rubber around in his pocket since ninth grade waiting for the chance for you to drop your panties.”

“I hadn’t thought about that,” I said.

“Well then, that’s your task. Find a rubber.”

“What? I don’t know where I’d get a condom on this short notice.” I shot a glance at the alarm clock on my nightstand beside the bed. It was ten to six. “Dinner is going to be ready in ten minutes and then Caden will be here to pick me up at seven.”

“Ask him to bring you by the pharmacy on Eighth Street. He won’t have any idea you’re going inside to get condoms. He’ll assume you’re buying tampons or something. Or chocolate. Or—”

Dana flashed me a bright white smile. “You should buy lube while you’re in there too. You know. For your lady bits.”

I groaned and buried my face in my hands. “Mia.”

“It’s a good idea. This is your first time. It’ll be like trying to fit a…” She trailed off. “I can’t think of a clever analogy. But if the rumors are true, Caden has a big dick and you have a tight vagina by default. So. Yeah. Lube.”

Dana pulled my hands away from my face. “Okay, I’ll stop. But in all seriousness, Olivia? I’m happy for you. I know how much you love Caden and I know how much he loves you. I think tonight will be very special. And you’re going to knock his fucking socks off.”

I giggled. It was true. I would. I’d been fantasizing about the moment all week, ever since I made up my mind that I wanted to give myself to him before graduation. We’d been together for nearly three and a half years and every day just made us even stronger together. We had big dreams and wide-open futures with no hard-laid plans, aside from each other.

Caden was my plan, and I was his.

And tonight, I would show him just how much I loved him.

I got to my feet and smoothed out the skirt of my yellow dress. It was covered in white daisies and had a sweetheart neckline and a sash around the waist that tied behind my back. It was one of Caden’s favorites. He loved when I wore yellow. He always said I was his Texan dream girl when I wore it and I would never get tired of hearing that.

I fetched a pair of white sandals from my closet and a loose white cardigan to throw over my shoulders. Then I grabbed my purse from the end of my bed and checked my reflection one last time.

“And just a heads-up, I’m going to want to hear all about this before class starts tomorrow. How about I pick you up tomorrow morning and we grab coffee on the way to school so you can fill me in?”

Our heels striking the stairs as we descended caught the attention of my parents, who hollered down the hall that dinner was ready. My dad, all six feet and three inches of him, came into the foyer as Dana was shrugging into her light denim jacket.

He braced himself against the stair banister. “You’re welcome to stay for dinner, Mia. Judy made enchiladas.”

Dana pouted nobly. “That sounds and smells delicious, Mr. Desmant, but I’d better get home to my folks. Thursday nights are movie nights at the Young house and my dad has his heart set on a thrilling film about the mafia.” Her voice dripped with sarcasm as she tugged the front door open. “At least there will be pizza.”

My dad chuckled. “Good luck, kiddo. Maybe we’ll save you some leftovers and send some to school with Olivia tomorrow.”

Dana‘s eyes lit up. “That would be amazing.”

“Consider it done,” my dad said, turning back to the hall to make his way into the kitchen. “Say hi to your folks for us, Mia. And drive safe.”

“Goodnight, Mr. Desmant,” Dana said. Then she called louder to my mother, who shouted goodbye down the hall.

I stepped out onto the front porch and stood at the top of the steps as Dana walked to her car in the drive. She drove a rundown little Geo metro. It had been white when she bought it, but one of the guys at school offered to paint it for her for two hundred bucks. She’d jumped at the offer and now it was a sparkly purple.

The paint looked too fresh for such an old car. The interior was kind of crappy. The passenger window was stuck cranked a quarter of the way down and the back floormats were missing, but it had served her well the past year and a half. It was cheap on fuel and got us all over Houston.

Dana waved goodbye over the hood of the car and slid into the driver’s seat. She reversed down the long driveway, pointed her headlights east, and drove off just as the streetlights flickered on, signaling that it was seven o’clock.

I met my parents at the dining-room table for dinner. It was nicely set and my plate was already full. It smelled like heaven and tasted even better and I washed it down with sips of iced water.

I dabbed at my lips with a napkin and placed it back on my lap. “She’s good. A little apprehensive about school ending so soon, but good.”

“She still doesn’t know what she wants to do?” my dad asked.

I shook my head. Dana had been all over the map with career ideas and she was under a lot of pressure from her mom and dad, who’d set up a savings account when she was born that needed to be used within a year of graduating high school.

“Her last idea was marine biology,” I said.

“Doesn’t she hate science?” my mother asked, blinking at me through her white-framed glasses. They were cut in dramatic points at the end, forming a cat-eye shape, and they were far more stylish than any other pair she’d ever owned. My mother was really coming into her own in her fifties and it showed. She’d stopped dying her hair and let it fade to a silvery gray that my father could not get enough of.

“Yes,” I said. “That idea quickly went out the window. She’s back at square one. I think taking a year off is the right call for all of us.”

“I think so too,” my dad said, patting his full belly after finishing his meal. “You’re all still just kids. This is precious time. No need to rush into academics. Explore. Travel. Chase the sun. Drink a lot.”

I giggled and shook my head. “You know I don’t drink, Daddy. None of us do.”

“I know that’s what you tell me.” My father chuckled. “But if you did, your mother and I would not hold it against you. And if you ever need a ride home—”

I reached across the table and took my dad’s hand. “I know, Daddy. You’ll always be there to bail me out.”

He ran his thumb over my knuckles. It was callused from years of hard work as a carpenter and now as a contractor. His business had bloomed in the last ten years of his career and my mother and I had reaped the benefits. My dad was our knight in shining armor and there was no one in this world who meant more to me than him.

Not even Caden. And Caden knew it.

“I love you, baby girl,” my father said.