Read Chapter 1 of Looking To Score 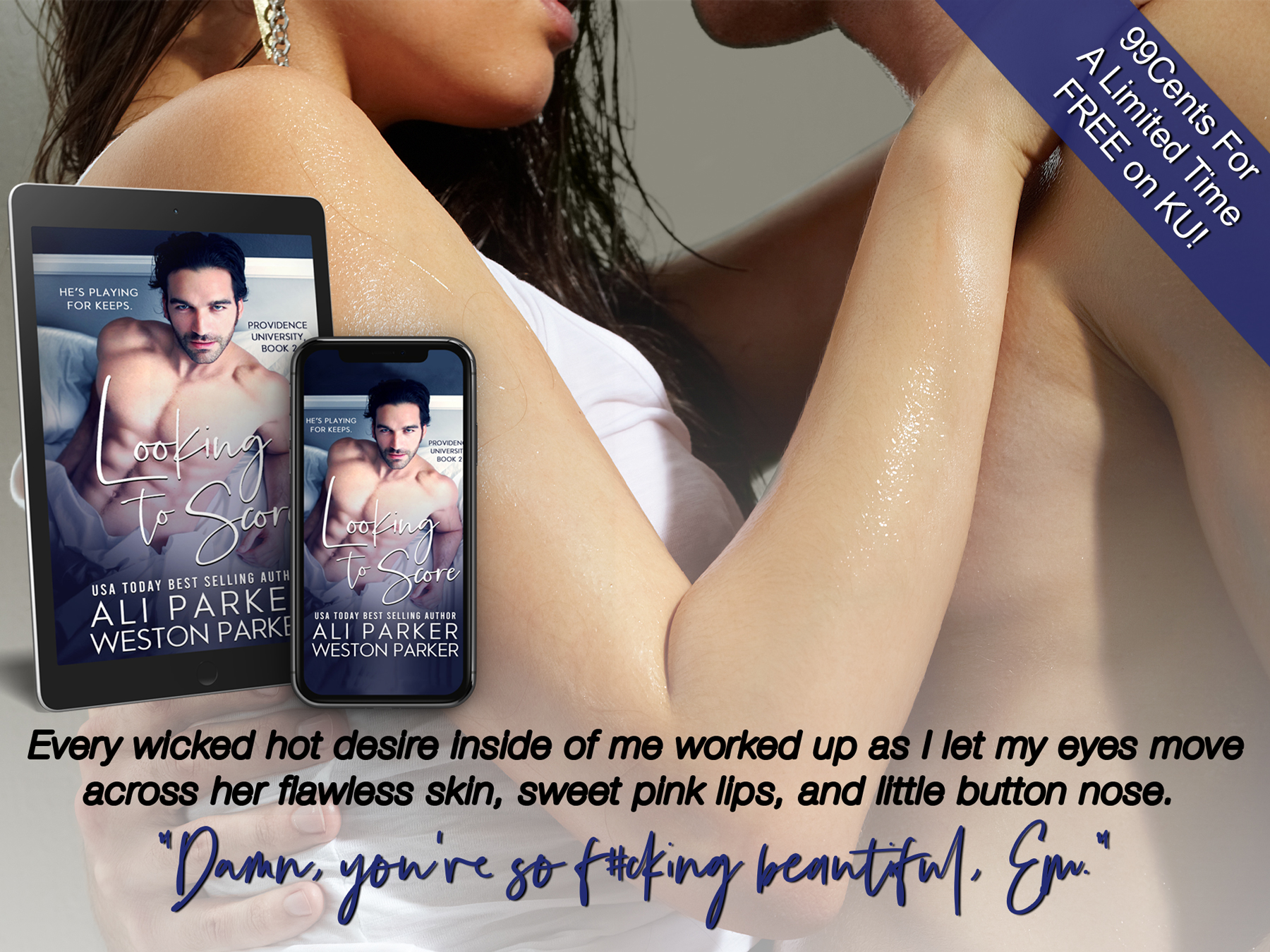 “I really should have taken the summer off. This last semester almost killed me.” I glanced over at my roommate as we hoofed it another time around the outdoor track at Providence University.

“At least we still have a few more weeks until summer classes start.” Natasha shrugged and reached up to tuck a strand of her short white-blonde hair behind her ear. Why she dyed it almost platinum was beyond me, but if I had to guess? It was to piss her mother off.

“How many classes are you taking?” I wiped the sweat from my brow and pushed harder, though my legs were sore as hell from cheer practice going an hour longer than it should have the day before.

“Oh yeah? You could be taking three?” I gave her a cheeky grin and moved as she playfully swatted at me.

“No, you could be pregnant.”

White-hot fear raced down my spine. “No, I couldn’t be. Not only would Brody flip his shit, but I wouldn’t have any way to support a kid.”

“Brody.” She rolled her eyes.

“Why would you bring something like pregnancy up? You pregnant?” I reached out and poked at her. Anything was better than the two of us getting on the subject of my boyfriend. Tasha hated him, as most people with sense did, but he wasn’t nearly as bad as some of the guys I’d dated in the past. It could have been worse.

“I ran into Geoff last night at Merskys.” She shrugged and glanced my way. “You know he got Teri pregnant and they found out during spring break, right?”

“What? The guy from the hockey team?”

“Yeah, and one of the ice hookers or whatever they call them. I swear, your friend Aubrey is the only clean one in the bunch.”

“Because she’s a dancer.” I slowed my jog to a fast walk and focused on the track in front of me. I had no doubt that Tasha was giving me the death stare over my comment. We both knew what I meant. Professor McCraven was the head of the dance department, and she didn’t let anything slide. I’d seen it firsthand for the last three years. She was Tasha’s mother.

“Now here I was, trying to bring up a neutral subject that we could talk about, and you’re going to bring my mom into it. Fantastic.” She moved behind me and reached up to grip my shoulders, squeezing softly.

“I’m sorry. I didn’t mean it like that, but while we’re on the subject, have you talked to her since your last big blowup?”

“No. Thank God for my dad putting money in my account, or I wouldn’t have a pot to piss in.”

“You can piss in my pot.” I smiled and patted her hands.

“I do piss in your pot, silly.” She squeezed one more time and released me.

“In the same vein as having to see my mother, why are you still seeing Brody? He’s the biggest cockhead in this whole damn school.” She pulled the back of my T-shirt and forced me to stop.

I turned and lifted my hands to the air, stretching and enjoying the soft breeze that blew by. I didn’t answer for a few seconds because the conversation was one we’d had a million times over the last year.

Brody Jackson was quarterback of the Friars football team and by far the best looking guy on campus, but that was where the good stuff stopped.

“He’s not as bad as you guys think.” I reached up to let my hair down so I could put it back up tighter.

“Yeah, he is.” She rolled her eyes. “You’re the nicest person I know, Emily. Why would you settle for dating a total dick?”

“You know why.” I kept my tone even, which wasn’t too hard. Getting emotional and blowing a gasket because Tasha was speaking the truth about Brody was stupid. Where I’d once defended him, now I just tried to defend myself.

“So get a job. Just because he has money doesn’t give him the right to be an asshole to everyone around him.” Her voice rose, and I knew we were headed toward another useless fight. I wasn’t going to defend him, but I wasn’t breaking up with him anytime soon either. He wasn’t abusive and hadn’t cheated on me. Dealing with him being a dick was just part of him being a guy.

“Tasha. I’m not having this conversation again. I’m in love with Brody. Just because he has a few issues doesn’t give me the right to hang up a year of my life and walk away.”

“Sure it does. You’re being a doormat.”

I stopped and turned on my heel to face her. Her hazel-colored eyes were filled with far too much emotion, and I tried hard to remember that she cared about me. She was getting in my face because she cared.

“How many chances did you give Lewis? Right. None. You kicked him out at the first sign of trouble.” I closed my eyes and took a deep breath. “Look, my dad didn’t put up with shit either. Every time my mom even showed a hint of being real or human or made a mistake, he slapped her halfway across the kitchen. I’m not willing to give up just yet. He hasn’t done anything that you don’t do on a shitty day.”

“All right. I’m sorry for bringing it up.” She lifted her hands and took a step back. “He just pulled up. I’m going to take a few more laps and head to the court. I’ll see you later.”

“Tasha.” I put my hands on my hips as she turned and jogged off. Her petite frame and sweet face had most people thinking she was docile and sweet. It was a lie at best.

“Emily. Hey, baby. Come on.” Brody’s voice carried across the field and filled me with mixed emotions. I did like him but maybe not as much as I should for some of the shit I put up with.

“Coming,” I mumbled and turned, walking quickly toward him.

“Pick it up to a jog please. I want to get back to the apartment and get cleaned up so we can head out to the Omega House. Jacob Wright is throwing one of his blowouts tonight.”

I groaned and jogged toward my handsome boyfriend as sickness swam in my stomach. Going out to the Omega House meant that Brody was going to get tanked. Seeing that I didn’t drink, I’d be toting his ass all over the large frat house and most likely pulling him away from making a mistake all night long.

“I’m not going.” I straightened my shoulders as I reached him and looked him square in the face. “And you’re not either.”

His brown eyes searched my face as if trying to discern if I were serious. He cracked a smile and reached out, grabbing the side of my neck and pulling me flush against him.

“You’re so cute. Stop trying to be tough. It isn’t you at all.” He leaned down and pressed his lips firmly to mine, brushing his tongue into my mouth and pulling me closer.

I opened up and gripped his sides as he took his time exploring my mouth. The kiss was hot and deep, leaving me to want something more, which was never a good place to be with him. He always wanted to push the line and take a little more than I wanted to offer.

“I love the way you taste after you run.” He licked at my mouth and smiled. “Come on. Back to my place for a shower and then I can show you off at the party tonight. Wear a dress for me. And no panties.”

“Hush.” I pushed at his chest playfully as he tightened his grip on me and locked his jaw.

“I’m serious. I wanna fuck in public. No one but us will have to know. Just do what I said and I’ll take care of the rest.”

“No. Stop being a pig and come on.” I jerked from him and walked toward the car, trying hard not to get upset over something so stupid. He was a guy. Of course, he wanted to fuck in public. It didn’t mean I had to go with the flow.

“I’m not being a pig, Emily. I just want to have an experience.” He moved in behind me and slid his hands onto my shoulders, pulling me to a stop.

“I’m not fucking you in public.” I glanced over my shoulder but didn’t turn.

He pressed himself against my back and slid his hands down my sides and around to cup my breasts as he ground against me.

“You’re no fun. You know that?” He kissed the side of my neck and I gripped his hands and pulled them off my chest.

“Brody, we’re in the middle of an open field.”

“And? I don’t see a sign that says I can’t touch my girlfriend wherever the hell I wanna.”

I moved out of his hold and walked to the car, trying to think through how to respond to him without starting a fight and explaining that sex three times a day was too much for anyone. It had been the ongoing battle in our relationship, and where I loved rolling around in the sheets with him, he was insatiable in the worst of ways.

“Come on. Stop messing around and let’s go back to your place. Maybe there’s enough time to mess around before we go to this party you’re wanting to go to.” I stopped beside his cherry-red Mustang and glanced down at my reflection in the window.

My dark brown hair was wet from sweating so much and my skin looked good. It was the exercise and a new diet Brody had shown me a week or two before.

He walked around to the other side of the car and smiled wickedly at me over the hood. “You know the console shifts in the car. You could stop talking so much and put that pretty mouth of yours to far better use.”

“Remind me why I’m with you?” I opened the car door as he unlocked it and got in.

“Because I’m pretty, rich, and my cock is something you like to worship.”

I shook my head and leaned back. “I hate you sometimes.”

“No, you don’t, but you wish you did.” He started the car and slipped his hand up my thigh and over my mound. “No panties tonight. That’s the rule.”