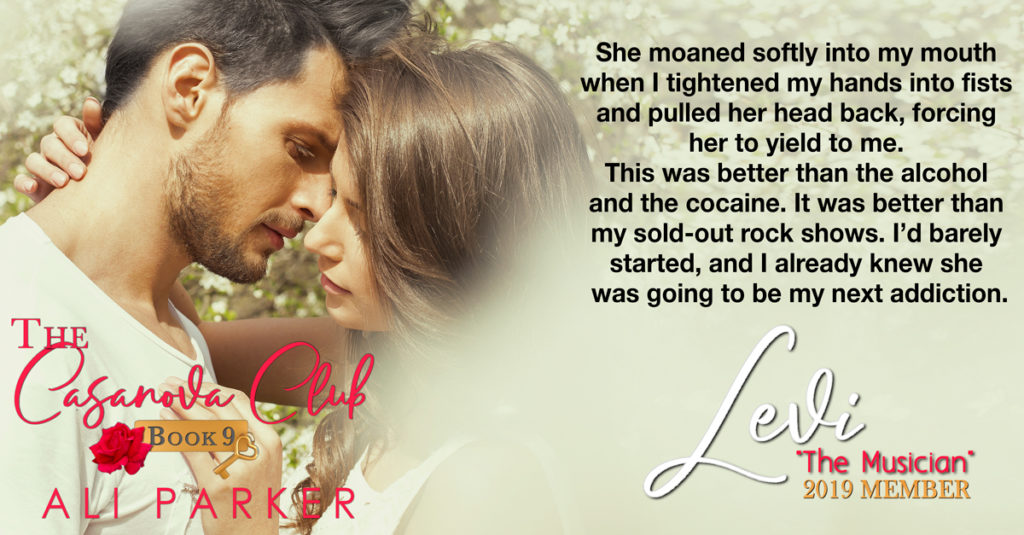 The sheet music in front of me on the piano blurred. The notes leapt off the page like slender, inky ballerinas, dipping and spinning over the beats and settling back down in all the right places.

My fingers hovered over the keys, and I paused to frown at the disobedient notes.

“Fucking shit.” In an effort to bring everything into focus, I squinted and leaned in close to the page. My nose was just three inches from touching the paper. The notes congregated closer together, but they still refused to cooperate.

A weary sigh over my right shoulder broke my focus. The notes trembled before springing back to life and shifting across the page. I pushed away from the piano, pinching the bridge of my nose and trying to ward off the headache that had started at the nape of my neck three hours ago and had steadily been working its way into my eye sockets.

Just what I needed right now.

My little brother—well, he wasn’t so little now, he was fuller and taller than me—Jake, was standing in the corner of my in-home recording studio with his arms folded over his chest. He wore a smirk on his lips, the top one thin, the lower one fuller, just like mine.

“What?” I asked sharply.

“Of course, I do. I’ve spent the last three hours with you.”

The corner of his mouth twitched, but he didn’t smile. Instead, he pushed off the wall and walked lithely to the piano, where he stood on the other side and rested his elbows on the lid. His dark green stare settled on mine before wandering across my face, no doubt taking note of the dark circles under my eyes, the red around my nose and irises, and my pale complexion. “When was the last time you ate?”

It annoyed me that our roles had reversed somewhere down the line. Where I used to be the big brother, the one calling the shots, making the rules, asking the questions, barking the orders, and doing the looking out for Jake, it was now the other way around.

Which was a funny thing.

Because in terms of success, I was still in the lead by a fucking long shot.

I was Levi Morgan, lead singer of The Levi Project. When the band first took off fourteen years ago, I was young, only eighteen, and stupid, and when our big breakthrough came when I was twenty-one, shit hit the fan.

I had access to everything and anything I wanted, when I wanted it.

The lifestyle was dangerous and all consuming. One day bled into the next, and every song released was more and more marketable, but each one stole something from my soul. My record label said that was the price of being a big name in the music industry these days. Compromise. The fans want what they want.

And since I owed all my fame and life of luxury to my fans, I’d better damn well give them what they wanted.

It was just getting harder.

With a muttered string of curses, I closed the fallboard over the keys. Jake frowned, and I ignored him as I turned all the way around on the bench seat, swinging both legs over to plant my feet on the other side and lean back against the fallboard.

“Done for the day?” Jake asked.

“Do you want something to eat?”

Why was he always trying to get me to eat something? I’d eaten recently. Last I recalled, I’d had a bowl of cereal roughly… well, sometime within the last thirty-six hours at least.

I just wanted to climb back into bed, close my sun-canceling blackout curtains, and be dead to the world until—

“The girl comes tomorrow,” Jake said, moving around the piano to take the metal stool across from me. It had a leather cover over the seat with the label of my band on it. My name, printed in red, vanished under his ass when he sat.

I didn’t know. I’d forgotten. I forgot a lot of things these days.

“Do you have any intention of cleaning yourself up before she shows up?”

“What? You don’t think this is exactly what she’d expect?” I gestured down at myself. Torn-up form-fitting black jeans, a long-sleeved black shirt with a low unbuttoned collar exposing bare chest and sparse hair, and black sneakers with white laces.

Jake narrowed his eyes at me. “Have you looked in a fucking mirror, Levi? Jesus Christ. And you can hardly read the sheet music.”

“Don’t bullshit me. I was watching you. You wrote the fucking songs, and you can’t read it.” Jake shook his head and looked at his hands, clasped together between his knees. His hands, like his eyes, were the same as mine. We were only two years apart in age—a fucking nightmare for our mother, God bless her soul—and had more physical similarities than anything else.

We were two entirely different people, something our mother used to joke about when we were boys. Where Jake was the scholastic jock, I was the brooding guitar player. Where Jake was earning a football scholarship, I was in my best friend’s garage, writing shit music to play in shit events for shit money just to have an excuse to sing my heart out into a shit microphone.

Jake looked back up at me. His dark brows were drawn together above his eyes. “I thought you said you were getting this shit under control.”

“At the beginning of the year when you first knew this Casanova girl was coming to stay with you. You said you’d clean up your act. If you fuck this up, the publicity could ruin you.”

“Ruin me, little brother? Please. I’m Levi fucking Morgan. It would take a hell of a lot more than a pretty little nobody strutting in here, not liking what she saw, and reporting it to the paparazzi to ruin me. Give it a rest, Jake. You can’t manipulate me into changing to meet your agenda. Nice effort, though.”

“Haven’t heard that one before.” I stood and left the music studio.

Jake hesitated a beat before following me out. His boots fell heavily across the black marble floor, across the foyer, and into the kitchen, where I grabbed a banana from a bowl on the counter and peeled it. I held it up and waggled it in front of him before taking a bite. Then with my mouth half full, I asked, “Satisfied?”

“You don’t sleep. You don’t eat. And you haven’t spent hardly any time in the studio. And what time you do spend in there, you’re just staring at your music like you can’t even read it. What’s going on with you?”

I nodded and crammed the rest of the banana in my mouth.

Jake raked his fingers through his messy dark-brown hair. “This isn’t a slump, man. This is addiction. I’m starting to worry.”

“You’ve said that before.”

“I know. But really. I feel like… like you’re slipping, and I can’t catch you, and I don’t know what to do. I just need you to tell me what to do, Levi. Please.”

What did he want from me? Why were we constantly coming back to this? To his worry? His stress?

My brother threw his arms up over his head. “No, you can’t! Clearly. You’re coming apart at the seams. I hardly recognize you anymore. The drugs. The booze. You have to slow down, man, or it’s going to eat you up, and there won’t be any of you left. No more music. No more fast cars. No more women.”

“There will always be women.”

“I need space where there isn’t always someone jumping down my throat, constantly telling me what’s best for me.” I threw my banana peel in the aluminum garbage can under the sink. “I need peace and quiet. And a brother who doesn’t try to handle me.”

“No? Then what would you call this?”

Jake’s eyes flicked back and forth between mine, searching for something. I didn’t have a clue what that might be, and I didn’t really care. I’d grown tired of this charade ages ago, and yet here I was, entertaining it all over again, waiting for him to get too fed up to carry on with the conversation like he always did. I could see the frustration building in him. His eyes, his furrowed brow, his tense shoulders. He was close to storming out and resolving to leaving me to my own devices.

“You should. You agreed to do this. You made a commitment. She doesn’t deserve this shit.”

“Then you entertain her,” I said, trying to dismiss him with a wave of my hand. I moved through the kitchen and formal dining room into the sitting room. I dropped heavily onto my black leather sofa and kicked my heels up so I was lying down. I fluffed the black and white checkered pillow behind my head before settling down to get comfortable. “I’m going to nap. Does that appease you, little brother? I’ll take a nice long nap, and when I wake up, I’ll have a full meal.”

Jake rubbed at his temples. “Whatever, man. You do what you want. You clearly aren’t going to listen to me or anyone who tries to help you, so fuck it. I’ll see you tomorrow.”

I smirked. “I know. I’m just pulling your leg. Get out of here, little brother. Go unwind. Have a drink. Do whatever you like to do to take your mind off your burden of a brother.”

I closed my eyes and waited for him to leave.

He did, and I was left alone to wonder about the woman who would be showing up tomorrow.

I never should have agreed to be a part of the stupid Casanova Club.