Read Chapter 1 of Let Me In – Ali Parker

Read Chapter 1 of Let Me In 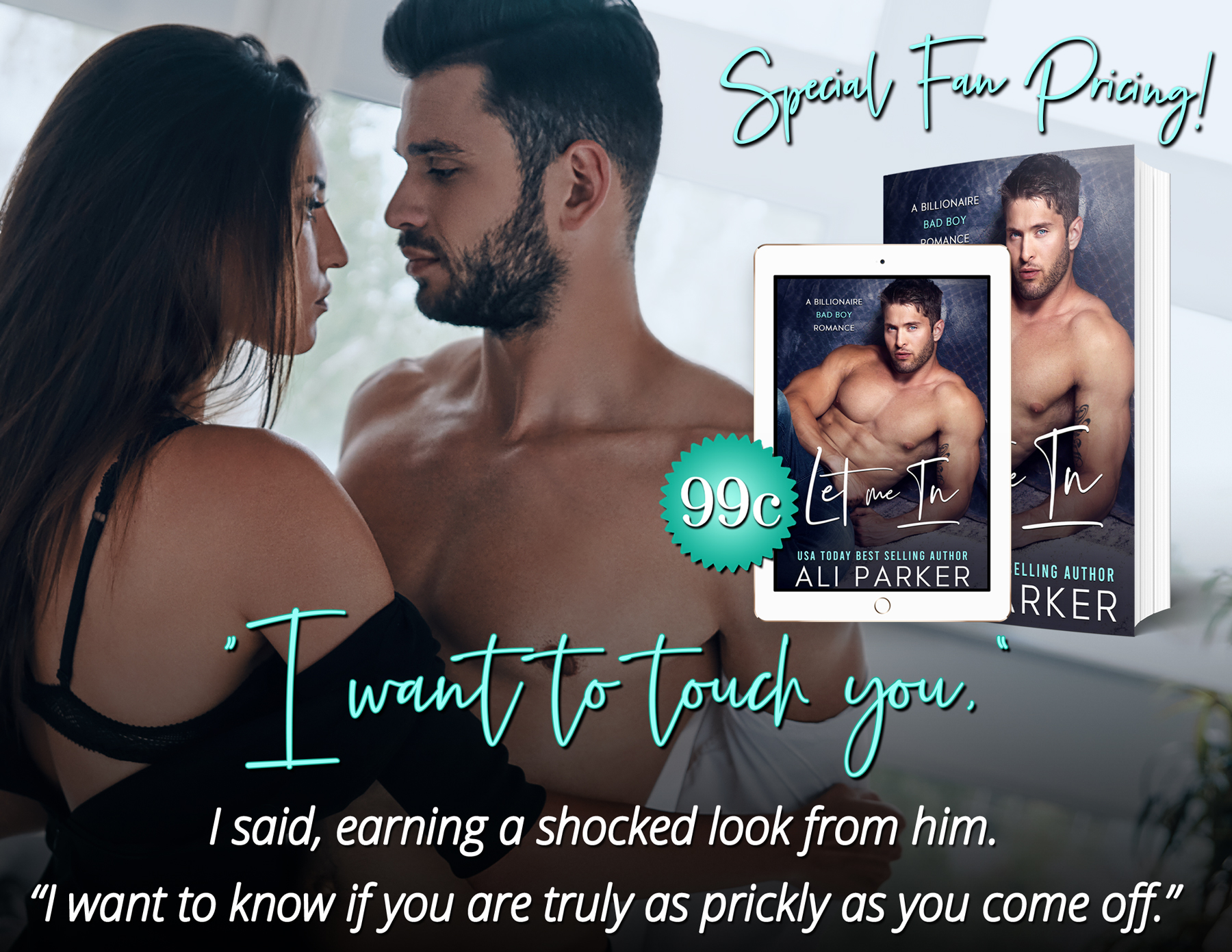 I kept my sunglasses on, protecting my eyes from the hot San Diego sun. I was early and in no hurry to get to my next class at UCSD. In fact, I was dreading it a little. I knew it wasn’t going to go well. It never did. My professor had taken a strong dislike to me from the moment I darkened his door. I didn’t know why, and I didn’t give a shit. I just needed the damn grade.

My book bag was slung over one shoulder as I walked along the cement sidewalk. I sipped the iced coffee I carried in my other hand. It was a gorgeous sunny day. As soon as I was done with class, I was going to the beach. A cold beer and some good music were exactly what this day needed.

“Wait up,” I heard from behind me.

I slowed my walk, waiting for Charlie Pugh to catch up. The guy was two years younger than me. We had met last year, his freshman year, and I had taken him under my wing.

“I didn’t think you had class on Fridays,” I said.

He grinned. “I don’t, but the hot chick I’m after does. I’m going to accidentally run into her and see if I can convince her to go out with me tonight.”

I patted my hand against my book bag. “I did.”

“Xander, he’s going to fail you,” he warned.

“I don’t care. It’s good. If the old goat could pull his head out of the nineteenth century, he would know it was good.”

He sucked in a breath through his teeth. “You are a rebel.”

“No, I’m smarter than the average bear and this asshole can’t see it. He hates me and is looking for a reason to fail me. It isn’t going to work. Even if he rejects the project or gives me a shitty grade, I’ll still pass.”

“What about your dad, though?”

I rolled my eyes behind my dark shades. “I don’t give a shit about that either. I’m passing. I’m not a college dropout. I’ll graduate and he can get over it.”

“Who is this girl you have the hots for?” I asked.

“She’s a little older than I am, blonde, and sexy as hell. I’ve had my eye on her for a while. I have accidentally run into her a couple times. I make her laugh.”

“Because you look funny,” I quipped.

It was funny because Charlie looked anything but funny. He was young with a lopsided smile and a laid-back surfer attitude. His black hair and crazy blue eyes made him a standout. Girls panted after him, but he always set his sights on the ladies he couldn’t have, the ladies that were not interested in his charms.

“I’ll wear her down. I’ll flash my blue eyes and smile a lot. It works every time.”

I shook my head. “I would be very careful boasting about that. Someone might lynch you one of these days.”

“We’ll see,” I said and continued on my way.

“So, the project, did you change it at all?” he questioned.

“Nope. It’s good. I know it’s good. The professor can fuck off. It’s people like me that are going to change the world. He is too set in his ways. He isn’t innovative. He wants to keep doing things the way they have always been done. He’s wrong.”

He let out a low whistle. “I hope you didn’t include that in your research.”

“You are close to being done with all this. Don’t rock the boat,” he said before bursting into laughter at the pun.

“That’s the thing. My boat won’t be rocking. My boat—ship rather—will carry ten times the cargo today’s ships do. My ships will use half the fuel. They are lighter, faster, and more efficient. If he can’t see that, he’s an idiot. Hell, I already know he is an idiot. He doesn’t have the ability to look ahead. He is stuck in the past.”

He shook his head. “I hope he doesn’t ruin your chances of graduating. You are so close.”

“He can’t. He doesn’t have that kind of power. He only thinks he does.”

We stopped walking. My class was off to the left. “Good luck,” he offered.

I shrugged. “I don’t need luck. I don’t give a shit what he thinks. I know I am right. If I had a decent professor who understood the first thing about engineering, I would be getting an award. My idea is solid. As soon as I graduate, I am taking it to a company that can put it to work. One day, I’m going to laugh my ass off atop my piles of millions. I’m going to come back here as an alum and make sure I point out that the asshole tried to keep me down.”

He laughed. “Gee, tell me how you really feel.”

“I’ll see you later. Good luck with the girl.”

“I don’t need any luck,” he shouted as he walked away.

I headed for class. It was my only class for the day. I had a feeling I was going to need a stiff drink afterward. I was so looking forward to the end of the semester. I was done with school. Getting my engineering degree had been a long, hard process. I told myself it was better than the alternative. At least for me. I was not military material. My dad insisted I was. I wasn’t. I knew myself better than he did, whether he believed that or not.

I pulled open the door and walked down the hall filled with posters about graduation, classes for next year, and so on. I ignored them all. I had short-timer syndrome. I was so close to being finished. I popped into the restroom before going to class. I was early.

I pushed up my sunglasses and took a look in the mirror. One of the reasons the old goat didn’t like me was he felt I didn’t take life seriously enough. Maybe I didn’t. I thought judging a book by its cover was wrong. My hair was too long. I liked the shaggy look. I supposed I probably looked like one of the millions of surfers that hung out at the beach with light brown hair that hung in light layers just above my shoulders.

I dressed like a surfer, I supposed. It was my senior year of college. The dress standard depleted with each passing term. I was lucky to find clean clothes, or mostly clean. I didn’t give a shit whether I matched or if they were wrinkled.

I smirked as I used my fingers to comb my hair down. I could admit my lack of concern for my image was a direct insult to my dad and family that had sticks way too high up their asses. I was the proverbial black sheep and I didn’t care.

Putting off the inevitable wasn’t going to make it go away. I left the bathroom and walked the few feet down the hall to the class. I actually felt nervous. I shouldn’t feel nervous. If my professor was worth a shit, he would see I was onto something. Instead, the guy hated me. I was convinced he was intimidated by me. He didn’t want me to be successful.

“Mr. Holland,” the professor greeted me with a stern look on his face. “Are you here to turn in the final?”

I nodded and opened the messenger bag. I pulled out the black binder that contained the paper that would be the final piece of work turned in. “It’s right here.”

“I hope you changed course,” he murmured as he took it from me.

He scowled at me and flipped it open. The first page of the report was a mock-up of the ship I engineered. “I told you at the beginning this was not an acceptable project.”

“And I’m telling you the research is sound.”

“This shit will never work,” he snapped and tossed the binder on his desk without bothering to look at the research.

I looked behind me. There were a few students already seated. They were trying to hide their laughs. I was not the guy that was ever going to win Most Popular. I didn’t care. I trusted my work. I knew what I had, even if none of them could see it.

“It will work,” I argued. “You just need to look at the research.”

He shook his head. “It’s assholes like you that think you are going to change the world because you are smarter than anyone else. Look at history and science. You won’t. This is a failing paper.”

I wasn’t going to win him over. I knew that. He wasn’t my target audience anyway. “That’s cool. I don’t need your grade anyway.”

He glared at me. If he could have put his hands on me, I was sure he would have. He wanted to shake me.

I smirked, daring him to do it.

“Punk kids like you will destroy our world,” he said.

I buttoned my bag. “Lucky for you, professor, punk kids like me can see into the future. We aren’t stuck in the past. We are what’s going to save your ass one day. You are a shitty professor and you are going to be the one destroying our world if you don’t pull your head out of your ass.”

“You are a low-life punk. You will never amount to anything. Maybe I’ll visit you on the dockyard one day. That’s where you’ll be, swabbing decks.”

My tie was choking me. I hated wearing fucking ties. I didn’t let on that I was totally uncomfortable. I sipped from the crystal glass. It was only water. I was sticking to water for the night, at least until I got what I came for. Then, I was going home and having a stiff drink. Several stiff drinks.

“With that said,” the speaker said from his place at the front of the ballroom, “please, everyone, give our honored guest and Champions of the Earth award winner, Xander Holland, a big round of applause.”

Showtime. I got to my feet and tried to smile. I had a feeling it probably looked more like a grimace. I made my way up to the front to collect the plaque with my name emblazoned on it. I nodded at the audience that was still clapping and held up the plaque. “Thank you,” I said and walked away from the stage.

The room fell silent as I moved toward the room exit at the side. I didn’t stop going. I walked right out the door and got into my car. No one said I had to give a speech. I didn’t do speeches. I didn’t do public gatherings much at all. Over the years, the introvert thing appealed to me more and more. The older I got, the more I discovered I didn’t really like people.