Read Chapter 1 of I Hope You Dance – Ali Parker

Read Chapter 1 of I Hope You Dance 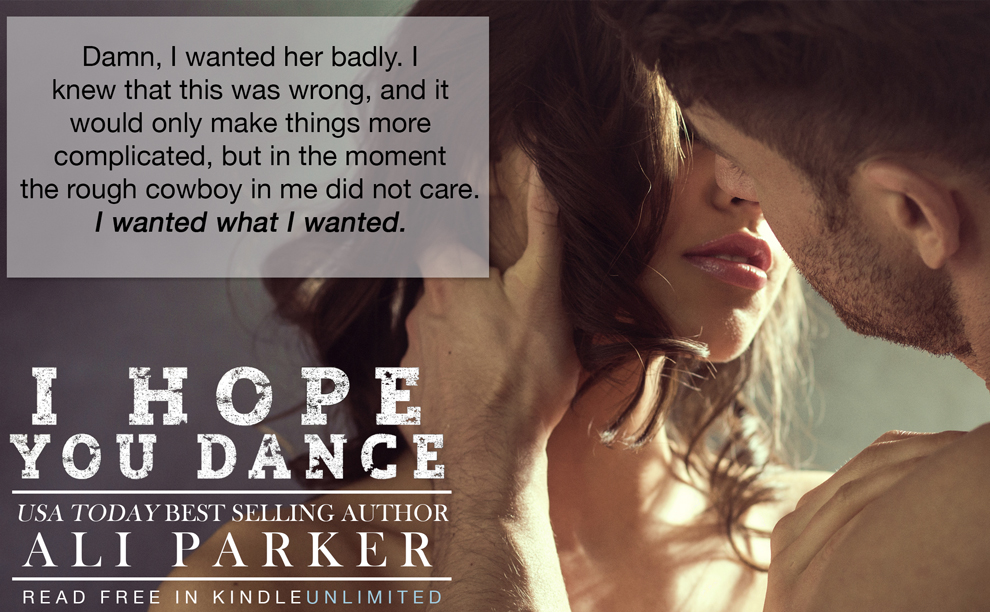 “Eight ball corner pocket and if I make it, that means Tanner and I are on a streak,” Dylan said, aiming his pool stick on the green felt of the pool table. We were all enjoying after work beers at the local dive. Connor and I were on one team and Tanner and Dylan on the other. This is what the Dawson brothers did. It’s what we had always done since I was old enough to drink, being the eldest and all.

“Yeah, well I’m better at darts, what can I say?” I said, watching Dylan make that corner pocket.

“Yeah, yeah. You’re good. Maybe if you spent more time working at the ranch instead of taking breaks all the time to practice your pool game, your skills would be more like the rest of us,” Connor said, teasing him about always hovering around the pool table out in the barn when he was supposed to be working.

“I resent that. I do the same amount of work as all y’all. I just do it faster so I’m done earlier. It’s probably because I’m younger and a little more fit than y’all,” Dylan said with a happy grin.

“Another round?” Tanner asked?

“Yeah, but I think the losers need to pick up this round. What do you think?” Dylan asked Tanner.

“Yeah, I think you’re right about that, little brother,” Tanner replied, smiling as he stood next to Dylan, crossing his arms as he did so.

“Alright, dang it. I’ll get it,” Connor said, putting his hands up. He walked to the bar to order another round of Lone Star beers.

I laughed. These were always the best times, these simple times just being with my brothers doing nothing but shootin’ the shit and hanging out. We were taking some much needed time for relaxation and beer after working hard on a Sunday. Normally we didn’t work too hard on Sunday. Feeding the animals and some minor work in the mornings was our usual routine. Then we would all go our separate ways, taking the day off. But this Sunday was different; it always was in the fall season. That’s because the harvest was coming up. This meant the work doubled. We were now working until late afternoon on Sundays, then throwing back some beers and playing pool afterwards. I liked it this way. Nothing made me happier, in fact.

“Alright! Who wants to switch it up to some darts?” I said, rubbing my hands together.

“Alright, let’s do it. But if you lose, you’re picking up the tab at the diner,” Connor said, coming over with the beers.

I looked at them. They all had stupid grins on their faces. The classic Dawson grin that we all shared. Even my little sister Abi had it. We couldn’t escape the family trademark.

“Alright! Let’s do it,” they all responded at once. We moved over to the dart board. Luckily, the dive bar only had a few other patrons on this Sunday afternoon.

I grabbed a handful of darts and went first, putting my score on the board. It wasn’t good.

We played a full round. I lost.

“Looks like Wyatt shouldn’t have been boasting about his skills. I still can’t decide what I’m going to order,” Connor teased.

“Yeah, yeah. Finish up your beers so we can go eat and get home. We got another early day tomorrow,” I said, wrangling in my younger brothers. It had always been this way for me. I was the oldest and that meant I was always looking after them. It had been that way since we were kids. I liked the responsibility and was a natural at it, but sometimes I did need a break. Father was good at looking after us as a family, but I helped out a lot and eventually my duties had grown. Now, I was the one my brothers looked up to and I coordinated our daily life on the ranch.

Outside the dive bar we piled into two trucks. Tanner was with me in my double cab, and Connor and Dylan were in Connor’s pick up. We rolled out across our small town of Safety, Texas, headed for the 24-hour diner.

“If my woman’s father is working, he’ll probably put extra bacon on my burger. It’s good to have relations at your favorite spot,” Tanner said, putting his arm across the seat bench, boasting of his plentiful bounty.

“Extra bacon is always a plus. How are things with your woman anyway? You know she’d be pissed if she heard you talk about her like she was your possession,” I said to him.

“Madison? Yeah, don’t tell her,” he said, followed by a laugh. “But things are going great. Couldn’t be happier.” The big grin on his face was evidence enough.

“That’s great,” I said, feeling a familiar twinge of jealousy. I was happy for my brother, but I also wanted what he had. It was always good waking up with a woman at your side, someone to be there for you, and to wrap your arms around. I wanted that. Sure I had dated a lot, even had lots of girlfriends, but not anyone I was that crazy about. I hadn’t felt that way since—

“We’re here. Dang I’m hungry,” Tanner said, pulling me out of my memories.

A few minutes later we were sitting at a table by the front door. Not our usual spot, but the place was fairly packed. It was Sunday and dinnertime, at that. Tanner was standing near the counter shouting a greeting to Madison’s father before coming to sit down again.

We placed our orders and I did notice that my brothers had made dang sure there would be a good fat bill for me to pay, even ordering dessert as well. I gave them a look, but deep down I didn’t mind. My money was their money, and vice versa. We each made our own cut from our ranch and farming operations, so they had each worked for it just as I did. That was what family business was all about.

“Looks like everyone is in here after a hard day,” Tanner said, looking around at men in work clothes.

“I don’t know if working overtime is going to be good enough this year. The wheat ain’t lookin’ so good,” I said, taking a sip of the ice cold soda in front of me.

“No? What’s going on with it? I rode Thunder down that field two weeks ago,” Tanner asked.

“Nothing wrong with it. No pest invasions, don’t have a sick crop, it just didn’t yield as much this year for some reason,” I said, shaking my head.

“Where? The ranch wasn’t ready for being short,” I said.

“You’ll think of something,” Dylan responded.

I leaned back in the chair and shook my head at him. I knew that he really believed that because I’d always done so in the past. That was what being the oldest brother was about. I took care of things and when they got messy, I set them right.

“I’m just worried about meeting the wheat quota for harvest is all. But we won’t know until we harvest and weigh it. Until then, I can only eyeball it,” I said.

“But everything else is looking great. Corn is proper, hay fields look good,” Connor said.

“Yeah, it’s gonna be a good harvest. Nothing to worry about,” Dylan grinned.

Just then a noise caught my attention. It was something being dropped. I looked to my side to see a little girl with red hair. “I dropped my bracelet,” she said, pointing just under the corner of our table.

I stood up. “Well, let me get that for you little lady.” I reached under and grabbed it for her.

“Sarah, what are you doing?” The voice was familiar. “I’m so sorry, I didn’t realize she had—”

Looking up at me with those same gorgeous green eyes, was Amber Lane.

“Amber,” I said, shocked to be looking at her of all people. I could hear my brother’s get completely quiet and stare, but I was too astonished to care. Looking at her opened the floodgates. She looked just as beautiful as she always had, with fiery red hair and green eyes. She looked older of course, more mature, but that was expected when you hadn’t seen someone since high school.

“Hello Sarah, nice to meet you,” I said, smiling.

“Go back to the table, I’ll be right there,” Amber said, pushing her daughter toward the back.

Sarah skipped away and followed her path. She went to sit with a man. That must be her father, and Amber’s husband.

“Visiting your folks?” I asked, pushing my hands into my pockets.

“No, actually we just moved back to Safety about a week or so ago,” she said.

Just then there was deep coughing coming from my table. My brothers were deliberately interrupting. Amber looked at them and smiled.

“Oh yes, do you remember my annoying brothers?” I asked.

“Yes, of course. Hey Tanner, Connor, Dylan,” she said, nodding a greeting at each of them.

“Hello Amber,” they all said, grinning stupidly at her and at me. They were embarrassing me without saying a word.

“Well, it was good to see you, Wyatt. I should get back to my table,” she said, giving me a smile from those full plump lips.

She turned and walked back to her table. I couldn’t take my eyes off her. She was wearing fitted faded jeans, a dark green tank top tucked in, and sandals. Amber Lane was still the most beautiful woman I had ever known.

“Um, you going to sit down now? You’re kind of making an ass out of yourself,” Connor whispered.

“Yeah,” I snapped out of watching Amber and sat down. Grabbing my iced soda, I took a large drink. My brothers all stared at me quietly, clearly expecting something.

“And now he’s pissed, so there’s definitely something going on in there.” Dylan pointed at my chest, indicating my heart.

“You see your old high school flame, the one you were so in love with for years, and that’s all you gotta say?” Connor asked. He probably understood more than any of my brothers, because he was a freshman when I was a senior, and knew what my high school relationship with Amber was like.

“Alright, let’s see here—I’ve got burgers, I’ve got chicken fried steaks,” the waitress Marjorie said, interrupting the interrogation just in time. I was thankful for it.

“White gravy? Yes, Dylan. You know I take care of my boys,” she said, with a wink. Marjorie had been serving us at the diner since we were kids and it was comforting to have her there still.

“Thank you, Marjorie,” we all said.

Just then, Amber walked by our table with her daughter and the guy I assumed was her husband as they headed toward the front door. Amber gave us a smile and nod, and I returned her gesture, though deep down there was more stirring than I cared to admit.