Read Chapter 1 of Getting Schooled 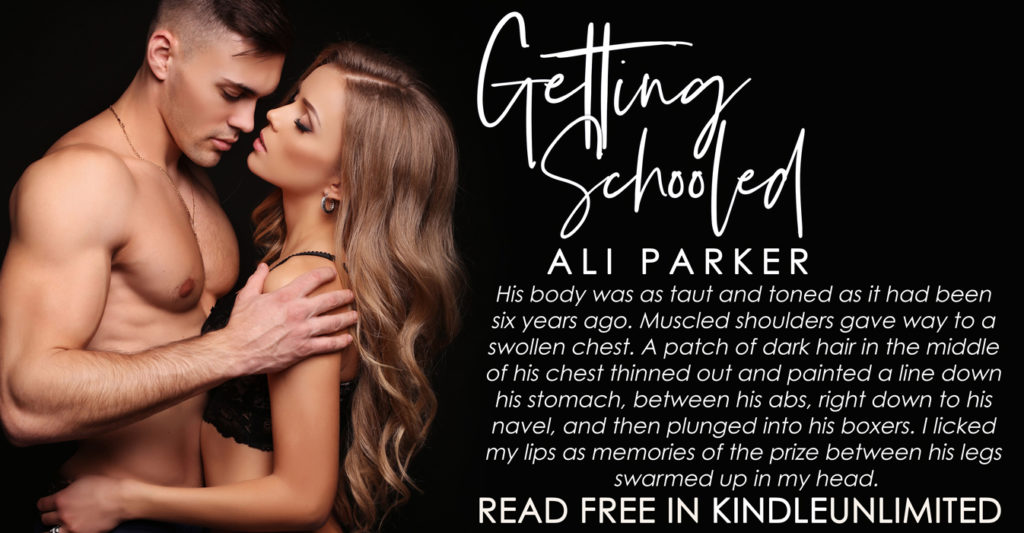 It was the third week of September and the fourteenth time I’d dropped Paxton off at his preschool, Youngster Academy.

The illusion I’d fallen into that the drop offs would get easier in time had all but shattered completely as he clung desperately to my pinky finger, dropped to his knees, and pleaded for me not to take him inside.

I dropped to a knee on the sidewalk outside the preschool. Other parents, mostly mothers, wove around us and cast wary looks down at my son as he wailed like a banshee and rubbed at his eyes with his little closed fist. His breath came in desperate, shaky sobs, and his grip on my finger tightened tenfold.

For such a little guy, he had impressive strength.

“Paxton.” I spoke his name calmly but assertively. The last thing he needed right now was for me to cave under the pressure of all the eyes on us. The other parents and children and teachers did not matter. Not in this moment.

All that mattered was reassuring my son that everything would be all right.

He blinked blurrily up at me through tear-filled, light-green eyes, the same eyes as me. I offered him a warm smile and closed a hand over his shoulder.

“I know you don’t want to go inside. But remember how much fun you will have once a little bit of time passes? Miss Jasmine is inside waiting for you. We’ll go in and say hello, and before you know it, I’ll be picking you up from Grandpa’s. Just like last week.”

I wish I could stay, buddy.

“Come here.” I wrapped him up in my arms and gave him a tight hug. He clung to my back, his little fingers curling in the fabric of my plaid shirt, and a puddle of wetness formed on my shoulder. It was either tears or snot. I didn’t care which. I stroked his hair, and he nuzzled his chin into my shoulder. “You’re a brave boy, Paxton. This is important for both of us. Okay?”

“Good,” I said, relinquishing my hold on him just a little.

Paxton trembled in my arms. “I miss Mommy.”

A cool September breeze rustled the leaves of the maple trees lining the sidewalk and the path up to the front doors of Youngster Academy. It carried with it the faint scent of the deli and bakery up the street where me and Gwen used to have breakfast after dropping Paxton off at daycare in the attached business to the preschool.

Last year, things had been as they should be.

Paxton wasn’t afraid to be left at daycare two days a week while I went to work and his mother taught her piano lessons. In fact, he liked going. He’d come home full of new words and information, and he’d spew it at both me and his mother in the kitchen while we prepared dinner. He hadn’t been a picky eater then, either.

But everything had changed in a matter of months.

Paxton fell apart, and so did I.

“I miss her too,” I whispered in my son’s ear. “Every day. But just because we miss her doesn’t mean we don’t keep doing the things that make us happy and strong. Like preschool. And being with friends. And going to work. Do you understand?”

Paxton nodded against my shoulder.

“Good boy.” I gave him one last squeeze before letting go. Paxton licked his lips, and I ran my thumb under his nose and wiped boogers on my pants. The life of a single father. Then I pushed myself to my feet, held out my hand, and waited for Paxton to make the decision to accept it.

I only had to wait a collective five minutes before he took my hand and let me lead him to the front doors of his preschool.

Our matching boots thudded softly on the pavement as we made our slow progression to the entrance. Other mothers and their children hurried past us. Everyone was always in a rush in the mornings to drop their kids off and bustle off to work. If I was late, I didn’t really care.

Things had been strained, and my job as a teacher at the high school just a few blocks from there was the only source of income I had, but my boss, Principal Bishop, was understanding of my current situation. She was a single mother too and had come through her storm in one piece after three years of court dates, meltdowns, lots of wine (or so she told me), and late-night screaming matches with her ex. I was lucky to have her in my corner while Paxton and I navigated our new way of life in his mother’s absence.

Sometimes, I wondered if things would have been easier if Gwen had died.

I know. It’s a terrible thought. One I have never spoken aloud before.

But it’s not insane.

If Gwen had died, neither Paxton nor I would have had to come to terms with the fact that she chose to leave us. That one morning, she lost her fucking mind, threw her hands in the air, and declared that she was done with me and her son and she was leaving to start fresh.

In a way, she was dead to me already. Well, in more than one way.

I hated her, and I had never hated anyone before. The woman I’d loved, with who I’d dreamed up ideas of who Paxton might be when he was still the size of an avocado in her belly, had broken my son’s heart. And I could never forgive her for that.

Paxton and I passed the threshold between the two wide open baby blue doors of the preschool. In the mud room, a small space lined with cubbies and hooks where the children hung up their jackets and changed into their inside shoes, Paxton and I paused to hang up his lunch kit and coat. I unlaced his shoes, helped him put on his indoor sneakers, and stole an extra second to run my fingers through his hair, pushing it off his forehead.

“You need a haircut, kiddo,” I mused.

Paxton reached for me. I gave him one last hug and was relieved when Miss Jasmine, a beautiful woman dressed in a navy-blue sari that complemented her dark complexion, approached us. “Good morning, Paxton,” she said, smiling her big white smile.

Paxton looked up at her. “Hi, Miss Jasmine.”

“Are you ready to go inside? Today is going to be a lot of fun. We’re doing crafts. Maybe you can make your dad a present?” She shot me a knowing look. Over the last month, she and I had pinned down a system we called “The Trade Off”, where we shifted Paxton’s interest from me to her in a seamless transition.

It worked almost every time. Some days were harder than others.

Regardless, she was a miracle worker, and I was eternally grateful for her. She was going to get a good Christmas present from Paxton. That was for damn sure.

“What are we making?” Paxton asked, unable to hide the curiosity from his voice.

Miss Jasmine chuckled softly and held out her hand. “Come with me. I’ll show you. All the supplies are already out. And if we get there first, you’ll get first choice.”

Paxton looked to me.

I grinned and nodded for him to go inside. “Go on, kiddo. I’ll see you tonight. I love you.”

I ruffled his hair before getting to my feet, messing it up from how I’d fixed it moments before. Miss Jasmine waggled her fingers at me as she steered Paxton through the doors and out of view.

I breathed a sigh of relief.

At some point or another, this was going to get easier. It had to. There was no way Paxton was going to be stuck with these high anxiety levels every time we had to say goodbye. It couldn’t be good for him. It certainly wasn’t good for me. He took a piece of my heart with him every time he left with his eyes full of tears.

I didn’t know how much more of this I could take.

With a heavy but relieved heart, I turned to leave the mud room and head back to the street where I’d parked my truck at the curb. A little girl blew past me, her long blonde ponytail streaming behind her like a ribbon, and she let out a joyful shriek as she connected with her friends on the inside.

Her parents, the definition of the perfect nuclear family, stood outside on the path watching after her with big smiles as their freshly pressed pantsuits replaced the light scent of maple in the air with laundry detergent.

I dropped my gaze and made to go past them, but the husband, Andrew, reached out and caught my elbow. “Jace,” he said, his crooked smile already getting under my skin. “How was today?”

None of your business, I thought sourly. But I didn’t say it. Instead, I shrugged. “Better than some. Worse than others.”

“Poor Paxton.” Ashely, Andrew’s wife, sighed dramatically. She raked her fingers through her thick mane of shiny blonde hair and shook out some of her perfect curls. “I can only imagine how hard things have been for you. If you ever need anything, anything at all, you know you can reach out to us, right? Our contact information is on the—”

Ashley clasped her hands together and smiled sweetly. “Yes. Well. Sometimes, I feel like I need to remind you because you never call.” She and Andrew let out uncomfortable little laughs. My skin prickled. “Even if you just need a sitter for an hour or two. I know time must be tight, being a single father and working full time and all.”

“Paxton’s grandfather covers those bases. Thanks, though.”

“It’s a shame when a grandparent has to double as a real parent.” Ashley clicked her tongue.

I struggled to maintain an even expression in the face of her ignorance and condescending tone. Ashely was a woman who took pleasure in asserting herself above you with backhanded little comments lined in a tone sweeter than honey.

In other words, she was a bitch.

“I have to get going.” I hooked a thumb over my shoulder back to my truck. “Duty calls.”

“Have a good day, Paxton,” Andrew called after me.

I waved over my shoulder, not giving them the satisfaction of offering a goodbye of my own.

At least when Gwen was in the picture, people weren’t constantly breathing down my neck with pity. They minded their own business and left us well enough alone because we fit into the category of an acceptable family under society’s bullshit umbrella and labeling systems: Mom, Dad, Kid. Check.

Neither did Mom and Kid.

Youngster Academy was a good school with great teachers with endless patience, which was just what Paxton needed. Switching schools with his separation and abandonment issues simply was not an option, but I would have chewed off my left foot to get away from the stuck-up, high and mighty parents who took their kids here.

There were only a handful of them, but that was more than enough. They were louder than the good parents.

But wasn’t that always the way?

Part of me wondered if Ashley and Andrew had liked me before because I was married to a dimwit just like them.