Read Chapter 1 of Demanding All of You! – Ali Parker

Read Chapter 1 of Demanding All of You! 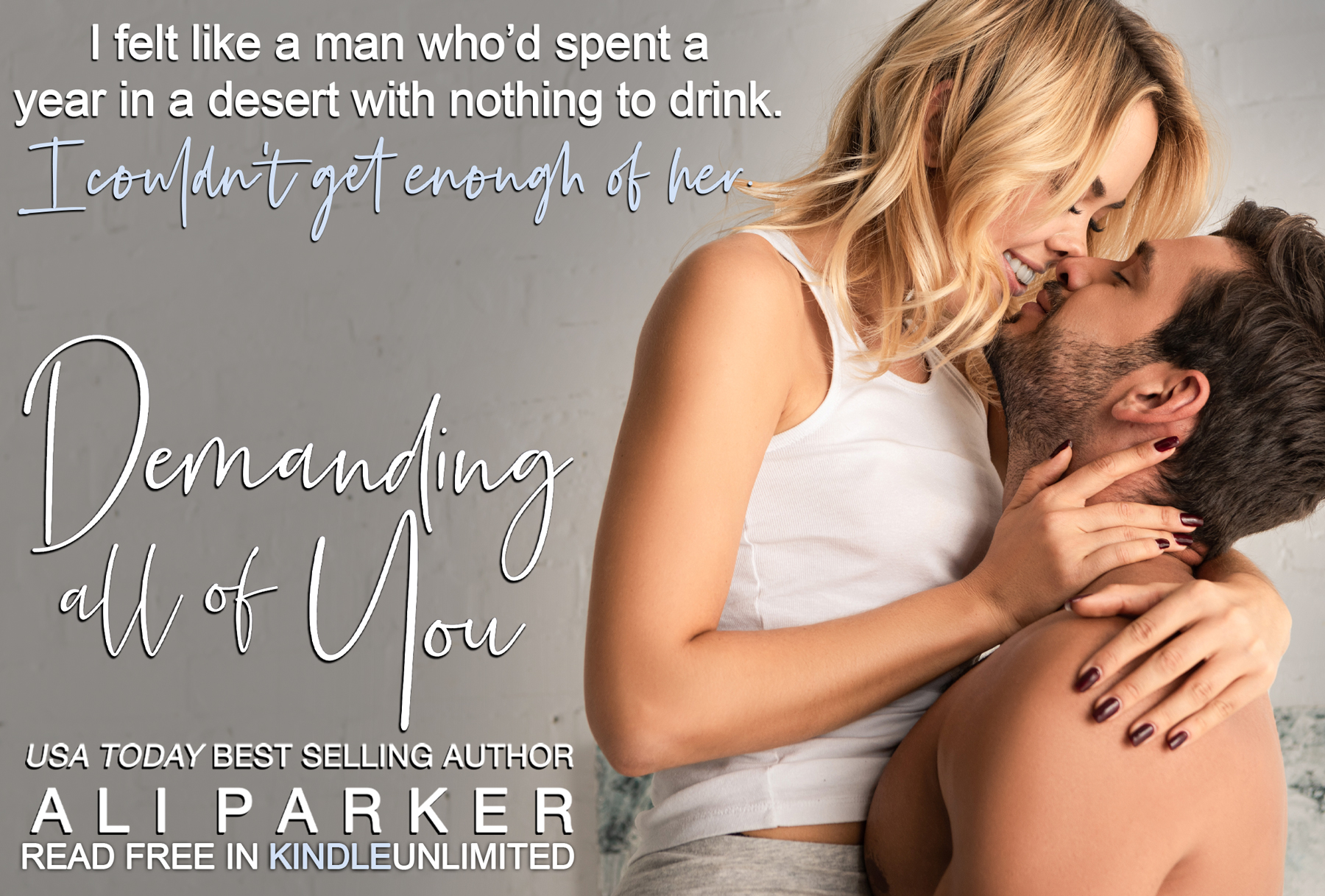 I finished making my editorial notes on the article from one of my new journalists before adding a complimentary note and emailing it back. She was a talented writer and I was looking forward to seeing what she could do.

There was a soft knock on the door. “Come in,” I called, knowing it would be my assistant.

She pushed it open. “Mr. Whittle, Tony is here.”

I nodded and waved a hand, indicating he should come in. “Thanks.”

Tony walked in. The guy was in his thirties and probably about one of the worst employees I had ever had the misfortune to work with. Tony flopped down in the chair across from my desk. I took in his wrinkled shirt and unshaven face. The guy was about a hundred pounds overweight and didn’t even try to clean up.

I offered my best smile. “Tony, it isn’t about what you did, but what you didn’t do. We’ve had several conversations about your work. I have a feeling it all fell on deaf ears. Your work didn’t improve. In fact, it got worse.”

“Excuse me?” he said, an ugly frown on his chubby face.

“At this point, we’ve exhausted all options. Your position with the magazine is officially terminated.”

I kept my voice even and devoid of all emotion. He wasn’t the first man I had fired and wouldn’t be the last. I ran a tight ship. I believed in giving second chances, but Tony was on his thirtieth chance with me. I had felt sorry for him.

“Fuck you,” he seethed. “You don’t know shit about anything.”

I raised an eyebrow. “That’s your opinion.”

“I should have known a little prick like you would get promoted over me. You come in here thinking you’re all that with your Hollywood looks and think you can boss me around.”

I slowly, purposefully looked down at my broad chest that was an appropriate size for my six-four frame. Little prick was not a term I had ever been called. I cleared my throat and straightened the royal-blue tie before offering him a small smile. “Tony, I’m sorry you feel that way. All the same, you’re fired.”

He hopped up from the chair. His stance and demeanor were aggressive. I got to my feet and stared down at him. He was almost a foot shorter than me. I gave him a hard look, warning him not to try anything stupid.

“You stupid motherfucker,” he shouted. “I fucking hate you. You can take your job and shove it up your ass.”

I nodded and walked to the door, pulling it open. My assistant stood on the other side, her face a mixture of fear and shock. “Sir?” she breathed.

“It’s okay,” I told her, jerking my head and telling her to step out of the way. I turned to look at Tony, who was still glaring at me. “Tony, I’ll walk you to the elevator.”

He glared at me before stomping by me. I followed him, not trusting him not to damage company property or possibly hurt another employee. Employees sitting at their desks looked up to see what the commotion was.

“Good luck working for this prick,” Tony said loud enough for everyone to hear.

I pushed the button on the elevator. Tony continued to rant, insulting the size of my dick and the color of my hair. His tirade was almost comical. The elevator doors slid open not a second too soon.

“Asshole,” he said, turning to look at me. “You’re a spoiled brat that doesn’t know the first thing about shit. You’ll crash and burn.”

He stepped onto the elevator and stood right next to my grandfather, who looked like he was about ready to knock Tony on his ass.

“Grandpa,” I exclaimed. “What are you doing here?”

Tony looked at the old man standing close to him and currently staring him down. He must have realized the threat and stepped back. My grandfather was an intimidating man. His steely-blue eyes could stop a rampaging steer dead in its tracks. I inherited my height and eye color from him.

The standoff between them ended when my grandfather stepped off the elevator. I breathed a sigh of relief. As much as I wanted to knock the shit out of Tony, I couldn’t afford to get hauled off to jail.

“Damion,” my grandfather said in that rich baritone voice that could shake the rafters one minute and read a bedtime story the next.

“Grandpa, when did you get to New York? I didn’t know you were coming.”

“Why do you let a little pissant talk to you like that?” he growled.

I sighed. “Because, Grandpa, this isn’t Montana. We don’t settle our differences with our fists.”

“I don’t think you settled anything,” he stated. “A man like that needs to have his ass beat.”

“I like being able to pee when I want without five other men watching me,” I told him.

He shook his head. “If you keep letting him talk to you like that, he’ll never respect you.”

I smiled, put my hand on his shoulder, and guided him back toward my office. “That’s why I fired him,” I said with a great deal of satisfaction.

“I would have popped him,” he insisted.

I ushered him into my office, closing the door behind us. “I’m glad to see you,” I told him. “Again, what brings you to New York?”

“I wanted to see you. I didn’t think you’d be coming home anytime soon.”

“How long are you in town for?”

I took the seat behind my desk. I watched him sit down. He moved a little slower than I remembered, and he looked thinner. I studied his face, taking in the more pronounced wrinkles around his eyes and the yellowish tint to his skin.

“You ever get outside? Let me see your hands.”

“You don’t go outside. You don’t work with your hands. What do you do?”

I shrugged. “I work in an office. When I’m not working, I’m taking care of Oliver.”

He smiled at the mention of my son’s name. “How old is he now?”

“Five, Grandpa. You know that.”

“Does he look like the old man?” he asked proudly. “I let him have my name. He better look like me.”

I chuckled. “He takes after me.”

I shrugged. “I suppose. How’s the farm?”

He turned his blue eyes on me. “The farm is fine. It could be better. I’m hoping to change that soon.”

“What happened?” I asked with concern. “You didn’t tell me you were having a hard time.”

He had always been a man of few words. Maybe it was why I had become an avid reader throughout my childhood. My mother had died of ovarian cancer when I was five and my father had been killed in a car accident shortly after. That left my widowed granddad to raise a little boy who was shy, lonely, and suffering from insurmountable grief.

“Is there anything I can help you with?” I asked him.

He scoffed. “No. I don’t know if you could anyway.”

“What does that mean?” I asked defensively.

“It means I just witnessed you getting disrespected by a man that isn’t worthy of licking your boots. Then again, I suppose you don’t wear boots anymore. You’re uptown. You’re too clean. You’re uppity, wearing your fancy suits and sitting in this big office. You don’t have that look of fire in your eyes. You’re not happy here. I can see that.”

I squirmed under his scrutiny. “Grandpa, it’s a good job. I like my job.”

“Since when did you like sitting in a goddamn office all the time?” he asked with a scowl.

“You could work the farm,” he offered.

“Yes, you are. It’s in your blood. You were raised on a farm. I let you go off to college, thinking you’d come back. It’s been eleven years.”

“I fell in love with the city,” I told him. “Oliver likes it here.”

He scrunched up his face. “Bullshit. You live in an apartment. That poor boy doesn’t even have a backyard. What does he do all day?”

“He’s in school, then an after-school program, and then we play games or read books.”

I rolled my eyes. I had been taught to respect my elders. “Grandpa, he’s a good kid. He’s healthy and is doing fine. Let me clear my schedule and we can pick up Oliver and go out to dinner.”

He gave me a soft smile. “I’ve got to be getting back soon.”

“How long have you been in town?”

He shrugged. “Not long, but you know I don’t like being in the city.”

“You won’t let me treat you to a steak? We’ve got some of the best steakhouses in the country here.”

He scoffed. “Bullshit. You’ll never get a better steak than what I have on the farm. Fresh and fed right. You’d remember that if you ever came home.”

“Can I fly you out for a longer visit in the near future?”

I studied the man I had thought was invincible for the majority of my life. He was big and strong and tough as nails. I had idolized him before my parents died, and then after he took over the role of being dad, mom, and grandpa, my idolization had faded. I respected him, but he was less of an idol and more of a parental figure.

“Maybe I’ll see about coming out to visit this summer. I’ve got some vacation pay and Oliver will be out of school.”

“Sure, sounds good,” he said in a noncommittal tone. He got to his feet.

I followed suit. “I really wish I could convince you to stay longer,” I said, walking him to the door.

“Me too, son, me too. Take care of yourself and that little boy.”

I stopped him and gave him a quick hug. He wasn’t the hugging type, but I did it anyway. I had become more of a hugger since having Oliver. Hugs were important. I walked him to the elevator and we said our goodbyes again.

I walked back to my office and sat down. Something felt off. I hated that he was disappointed in me. He had some high standards to live up to. It all seemed to come so easy to him. He was strong and capable and such a powerhouse. I always felt like I would be in his shadow. Nothing I ever did could ever compare to him.

By most standards, I was a successful man. I was an editor of a popular magazine. I had a great job, made decent money, and had a perfect little boy. My life was good. Slightly lonely, but good. I had thought when I graduated from NYU, he would have been proud of me. Instead, he’d seemed disappointed that I had chosen to stay in New York. He didn’t seem to care that I had found a woman I loved. We’d gotten married and had been looking forward to starting a family. Grandpa had said all the right things, but I knew he wasn’t truly happy for us.

He had expected me to take over the farm. I had thought I would too, but then I came to New York and my world changed. My eyes were opened to something new and different and exciting. Going back to the small town and the farm hadn’t been appealing. Ann, my wife, was a city girl through and through. She never would have been happy on the farm.

Ann was gone, I reminded myself. That excuse was no longer valid.