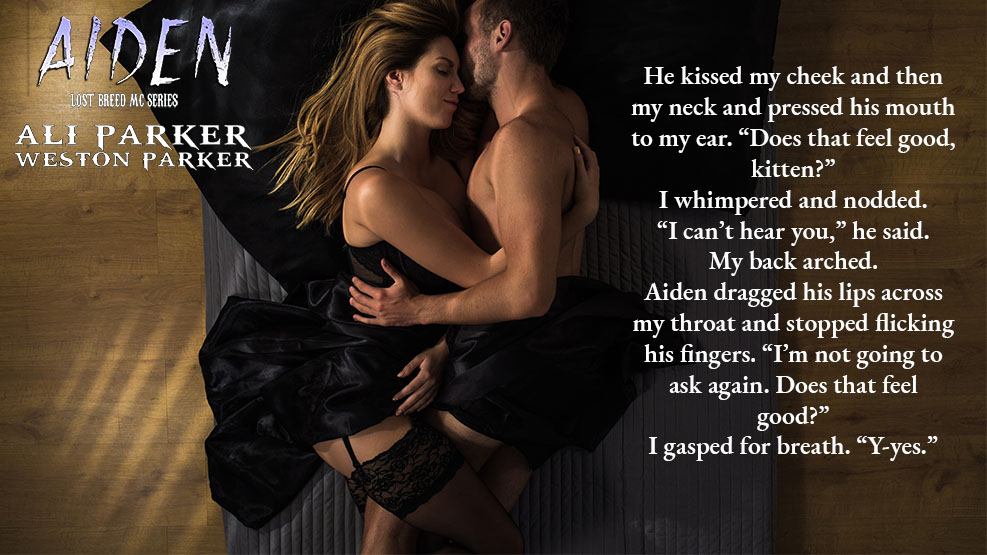 The sun beat down on my shoulders, heating up the leather of my jacket and practically cooking me alive as we sat at a red light in the middle of town in Patchogue. I flexed my fingers on the handle bars, spreading them wide to try to air them out. I should have worn gloves. My grip was sweaty.

The opposite traffic light switched to yellow. I lifted one foot off the pavement, played with the throttle, and sat back a little farther in my seat as the light finally turned red.

I took off over the line and through the intersection before our light went green.

The heat was intolerable.

I needed air blowing into my open jacket and over my face and knuckles before I passed out from heat stroke. When we got to our destination, Mastic Beach, I was going to have to pull over and drink some water. Long rides in the middle of July never went as smoothly as a guy wanted them to.

The engine of my Iron 883 rumbled and then roared as I opened up on the throttle and ate up the pavement. I gently swerved to the right, riding the center line down the middle of the road and threading traffic.

Everyone and their mother honked their horns at me.

My laughter was lost in the sound of my engine as I dove back into the middle of the lane, pulling in front of an old Cadillac with a middle aged female driver who flipped me the bird. She must have thought I wouldn’t catch her in my mirrors, but I did, and I was in the mood for some games.

Liam and Owen, two of my buddies, were a few cars back. Neither of them had taken interest in riding down the middle of the road with me, but they were slowly weaving their way around vehicles, showing better road manners than me.

I slowed down to ride right beside the Cadillac’s driver’s window.

She shot me a dark look, her already pinched features becoming even more squished with anger, and I flipped up the black visor on my helmet to wink at her before I gave the bike all she had, nearly lifting my front tire off the pavement, and peeled away, leaving her horn blaring behind me as I slid around a corner to head out of town and carry on our route to Mastic Beach.

The rest of the ride went smoothly once we were out of the populated areas and out on the back roads where we could push the bikes hard and avoid having to stop for red lights. We hit some four way stops but treated them like suggestions rather than rules, and found ourselves passing the Welcome to Mastic Beach sign at around one in the afternoon.

Within another eight minutes we arrived at our destination—a quaint little pub at the docks. It’s very unoriginal name, The Dock Pub, was written in faded blue paint upon a sign made of old two-by-fours mounted above the double saloon-style doors, which swung open and closed behind every patron as they came in and out.

After I pulled into the parking lot, I swung a leg off my bike while pulling off my helmet and setting it on the seat. I stripped out of my jacket, dragged my forearm over the sweat on my brow, and fanned my shirt away from my chest to desperately try to cool off to no avail.

Liam and Owen came rolling in behind me and took up the two spaces on either side of my Iron. They got off their bikes and seemed just as perturbed by the heat as I was.

“Let’s get the fuck outta this heat,” Owen grumbled, tucking his helmet under his arm and nodding up at the pub.

Liam seconded Owen’s motion with a short nod. “Yeah. It’s a fucking desert out here today. Why did we agree to go with you?”

I shrugged and we walked across the lot. “Nobody forced you. I just wanted to get out of the city. And this place has the best draft beer. It’s totally worth it.”

“I’m not going to feel that way until I get home and take a cold shower,” Owen said.

I pushed through the saloon doors and found myself blinking in the dim light as my eyes adjusted. The glare of the sun was still imprinted on the back of my eyelids and the three of us had to make our way carefully to the bar.

We each found a stool and the bartender, Jim Bradley, sauntered over to our end of the bar. Jim had a beer belly half the size of a keg of beer, and jowls to match. His nose was big and red, his cheeks covered in a patchy gray scruff. Despite his appearance, he was a cool guy with a small town attitude and a good business approach to guys like us who weren’t always welcomed so warmly in places like this.

Bikers—we got a bad rap a lot of the time.

Jim grinned broadly at us as he threw his bar rag over his shoulder and planted both hands on the bar. “Hello boys. Been a while.”

Jim patted his gut. “Sign of a successful business if you ask me.”

“Water for you boys? You’re dripping on my floors.”

The three of us nodded in unison as Jim got started filling giant glasses of ice water for us. As soon as mine was set in front of me I lifted it to my lips and drank like a man who’d been lost in the wilderness for days.

Jim refilled my glass and then without any of us having to ask brought us three draft beers. We had a tradition and came to this place a handful of times every summer. Usually Rhys was with us, but now that he and Quinn were officially together he’d pulled away from some of our rides. It made sense. The two of them had been hot and cold for years and now they’d finally thrown caution to the wind and decided to go for it.

I didn’t mind that he hadn’t tagged along. Honestly, I was growing a little tired of hearing how wonderful Quinn was—not that I didn’t agree. There’s only so much a guy can take, though. And I wasn’t alone with this thought. Liam and Owen felt the same way.

We ordered lunch while we sat at Jim’s bar. By the time it arrived I’d polished off my beer and another full glass of water. We dug into our meals—thick, greasy burgers with the works, plus a plate of fries that no man could ever get through but Jim himself. He had earned the hell out of that gut of his.

The pub quieted over the course of the hour and we sat there in the lull between the lunch and dinner rush, catching up with Jim.

Jim had been married for three decades. He and his wife moved to Mastic Beach after eloping to escape their rigid overbearing families and never looked back. They built this business together and made a life for themselves in the quiet beach town. “She’s good, thanks for asking. Retired from teaching in May and spent the summer out in the garden pruning her flowers and planting vegetables. She’s happy.”

“And the grandkids?” Liam asked.

Jim nodded. “You can say that again. But those little hellions keep me young. Be right back, boys. I have to do some payroll work. My staff is giving me dirty looks.”

Jim shuffled off into the back and the three of us continued picking at our plates.

My body temperature had finally dropped to a more normal range and I no longer felt like I would throw up or pass out. The water had probably helped with that. The others seemed relaxed and comfortable too, and the sweat stains on our shirts were slowly drying.

Owen, who was sitting between Liam and I, crossed his arms and rested his elbows on the bar. “I stopped by and saw Ryder the other day.”

“You think?” Liam said, cocking his head to the side.

“I didn’t really ask. Dani wasn’t there and neither was the kid. They were out visiting her Aunt or some shit. I don’t know. I was there to see Ryder anyway. You’re the only one of the three of us who likes kids, Liam.”

Liam looked at me. “Is that true?”

I delayed my answer to the question by taking a sip of water. “It’s not that I don’t like them. I just, I don’t know, can’t see myself ever wanting any of my own. They make me nervous. So fucking small and fragile. Like flower petals.”

Liam scoffed. “Who are you? Hemingway?”

Owen snorted into his glass of water.

I ignored them both.

Liam changed the subject. “Are you still covering shifts at Axel’s shop, Aiden?”

With a nod I said, “Yeah. Not many days. Once or twice a week. It’s a good place to be. The extra cash is nice.”

Owen shook his head. “He’s too standoffish. Any time I’ve ever tried to talk to him he blows me off and switches gears to talk to someone else. And he’s not subtle about it.”

“Maybe he just doesn’t like you,” Liam said simply.

“Should we make a list on a napkin?” I asked.

Owen looked back and forth between us with a scowl. “Fuck you guys.”

“See?” I said, chuckling as I fished my wallet out of my pocket to pay our bill. “Moody.”

Owen kept his mouth shut after that, brooding in silence as I paid the tab and we said goodbye to Jim. He waved us off and told us to come back before the summer ended. We assured him we would—but on a cooler day. This heat was too much to bear.

We left the pub shortly after three. Owen grumbled about it being even hotter out than it had been when we arrived, and Liam reminded him about how whiny he was being. This led to a shoving match in the parking lot while I put my helmet on and got back on my bike.

“See you clowns back in the city,” I said. Then I tore out of the lot, letting my back tire slide across the cracked pavement as I swung out onto the road.

I had no intention of letting them keep up this time.