Read Chapter 1 for Set The Night On Fire! – Ali Parker

Read Chapter 1 for Set The Night On Fire! 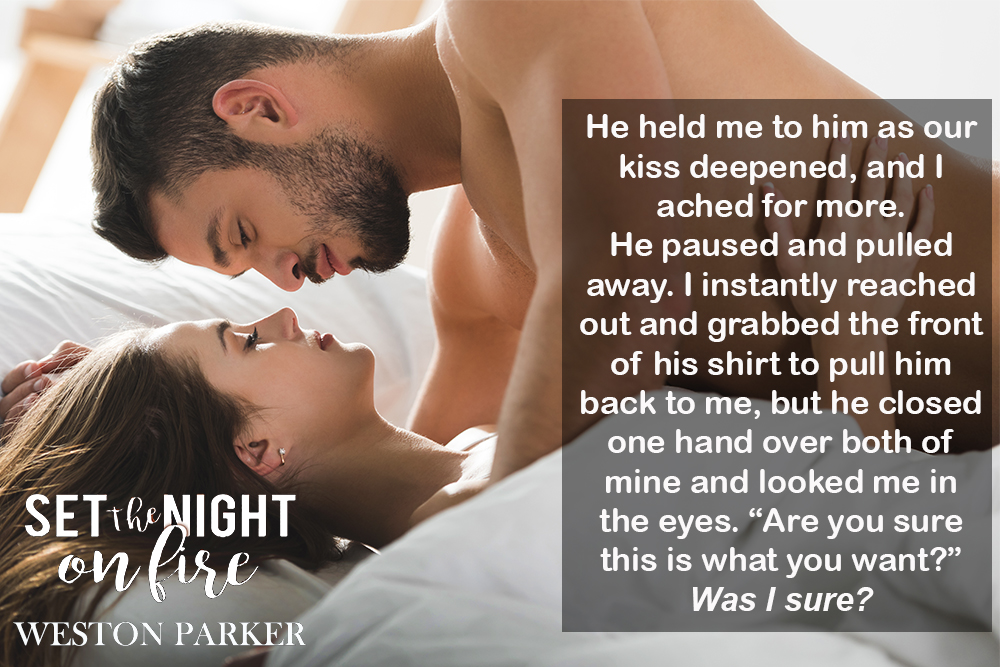 Chief Rinehart rounded the corner to the firehouse kitchen, and I hurried to take my boots off the communal kitchen table. If he noticed, he didn’t say anything. He just kept on marching right to the stove, where Maddox was working over a sizzling pan of eggs. The rookie glanced up at the chief, his dark hair hanging in his eyes, and gave him a sheepish smile.

I leaned back in my chair and clasped my hands behind my head. “Who knew the rookie could do something right, huh? He’s a wonder in the kitchen. Boys, we should get him a cute little frilly apron. What do you think?”

Rinehart moved around Maddox to come join the rest of us at the table. He dropped into his seat, and it creaked under his weight. Rinehart was a big man. He was the sort of man who, when walking down the sidewalk at night, often made other men cross to the other side of the road because of how intimidating he was. His white hair was cropped in a short buzz cut, and his white moustache was so immaculately trimmed that me and the rest of the boys often wondered if he woke up early every morning to tend to it. Like a little facial garden.

The chief looked up and down the table at the rest of us. We were all there and itching for our shift to end in an hour. The night shift was never the best, but winding it down with a breakfast none of us had to cook made it a bit more endurable.

Beside me was Hayden. He had both elbows on the table and was resting his chin in his hands, staring longingly into the kitchen as his hungry belly awaited food. I’d heard more than a couple growls from the depths of his stomach over the last fifteen minutes.

To his left was Allen, our most mysterious crew member. He hadn’t said a word in the past hour, which was common for him, and his nose had been buried in a book so he could avoid conversation like a master introvert.

On the other side of the table was Mav, our resident smarty pants, and Trace, our ex rookie. Trace was the happiest of all of us to have Maddox around because up until the young kid arrived, he’d been our punching bag. He still was to some degree, but Maddox was younger and therefore more fun to fuck with. He fell for most of the gags we pulled on him, and Trace, like the quick learner he’d turned into, never let Maddox in on any of the secrets. He went along with our hazing, even if it was just to protect his own skin.

“Where’s the damn food?” Hayden grumbled beside me. He ran his hands up his face and through his short black hair and slumped back in his chair. “I’m starving.”

“The rookie probably burned it all,” Mav said.

Maddox was looking over his shoulder at us, scowling. He didn’t say anything, but he reached to the dial at the back of the stove and turned the heat down.

I snorted. “I think you’re right, Mav. I hope you like your eggs crispy.”

We all laughed except for Rinehart, who looked back at Maddox. “Do you need a hand?”

Maddox shook his head frantically. There would be no greater torment than having the chief come and help him cook breakfast. Not only would we make fun of him for it for an eternity, but he would have to suffer Rinehart’s unyielding perfectionism, and none of us were equipped to deal with that nonsense.

“No, I’m almost done,” Maddox said hurriedly. He opened the stove and took out the tray of bacon before rushing over to the opposite counter to put down eight pieces of toast. With this many men working long shifts in such close quarters, we had opted for a toaster with multiple slots.

I got up and went into the kitchen to top off my mug of coffee. I walked around the table, putting a splash in everyone else’s cups before returning the now empty pot to the coffeemaker. I leaned over Maddox’s shoulder as he began plating all the food.

“Looks surprisingly good, rookie. And lucky for you. Hayden’s a grouch when he’s hungry.”

Maddox laughed nervously and handed me two plates. “Bring one to him, then. Save us all his wrath.”

I walked back to the table. “Maddox is shit talking you, Hayden.”

“Am not!” Maddox yelled from the kitchen.

I slid Hayden his plate and put the other one down in front of the chief. He thanked me and tucked in to eat. Within a couple more minutes, we all had our meals, and Maddox came back with a plate of toast and sides of jam and butter. We ate like the ravenous beasts that we were and talked while Allen continued reading. It didn’t bother us that he kept to himself. He was as much a part of the team as the rest of us were. What mattered was that when the time came to snap into action, he was reliable. He was good at his job, and his time in the marines had made him a formidable force.

If I was ever trapped in a building and he came for me, I’d be happy as a clam.

I had just smothered my toast in jam when the alarm went off. Rinehart was on the move right away as we all rushed to our feet.

“Medical call,” the chief told us. He pointed at me and then at Maddox. “You two.”

Maddox was already hurrying out of the kitchen and down the hall to the garage to get ready.

“I don’t do medical calls, Chief—”

Rinehart shook his head at me. “And I don’t get told no. Move your ass, Janson, or so help me God, I will move it for you.”

Knowing better than to argue, I ran out after Maddox. We raced over to Gerty, one of the two fire trucks in our station. Berty was currently being washed out on the driveway. I hopped into the driver’s seat and was pulling out of the fire station before Maddox had his seatbelt on. The address came through our radio and was followed shortly by the details collected by the emergency dispatcher.

“Pfft,” I spat, shaking my head as I white-knuckled the steering wheel. “Heart attack my ass.”

Maddox glanced over at me. He had a firm grip on the door handle as we tore around a corner and I flipped the sirens on. “You don’t think it’s legit?”

“No. Usually isn’t with these sorts of calls. Some asshole has chest pain, and he’s so self-involved that he thinks he’s going to die. People forget they’re human and overreact at the slightest feeling of discomfort.”

I shrugged. “Then I owe you lunch.”

We turned right onto a residential street, and I parked at the curb of the address given to us. Maddox and I hurried out of the truck as an overweight man waddled down the path in front of his house to us. He had a hand clutching his chest and sweat spotted his brow.

“Thank God you’re here,” he said, wheezing between every word.

I looked at Maddox out of the corner of my eye. The rookie looked genuinely concerned as he took the man’s elbow and guided him to the back of the truck, where he insisted the man take a seat. Maddox started out by asking for the man’s name.

“Right.” Maddox nodded. “And when did the chest pain start? What were you doing?”

“Nothing. Just watching NASCAR on the TV and—”

The front of his oversized navy-blue shirt was covered in orange dust and so was his crotch.

Glen blinked. “Yes. Anyway, it came up on me all of a sudden. A tight feeling right here.” He pressed his middle and index finger into the divot between the top of his ribs and his collarbone on the left side. “And it was so close to my heart, I knew something was wrong. Then it was hard to breathe, and I know what they say about your arm tingling. It means you’re having a heart attack. And then, sure enough, it was tingling and—”

Glen nodded as Maddox looked over his shoulder at me. “Should we get him in the back of the truck, or what?”

Glen’s eyes nearly popped out of his head.

“An ambulance is on the way. We’re just first responders. They can take him.”

“No, you don’t. You’re not having a heart attack.”

I shook my head. “Nope. You didn’t. You just scared yourself is all. If you were having a heart attack, you wouldn’t be able to have a conversation like this with us. Trust me. But the medics will get here, and they’ll take care of you.”

Maddox pulled me aside and lowered his voice. “This doesn’t feel right. It’s our job to get him to the hospital if we get here before the paramedics and—”

I put my hand up, and Maddox fell silent. “No. I don’t take people to the hospital unless they actually need to get there. This guy’s body was just begging him not to stuff it with another fucking Cheeto. You and I need to be available for if someone is in real trouble and needs our help. We don’t do the medics’ job for them, do you understand?”

Maddox wouldn’t look me in the eye. “I’m still not so sure.”

Sirens whirred in the distance, and I threw my hands in the air. “Fret not, rookie. Help is on the way.”

The ambulance arrived a short two minutes later, and two paramedics hurried over to us and started asking Glen the same sorts of questions we had. They asked for his name, his age, and then had him rate his pain on a scale of one to ten. He gave them the same answers, and the female medic, a short-haired blonde who filled out her uniform rather nicely, shot me a dark look. “Why the hell is he just sitting on the back of your truck?”

I slid my hands in my pockets and shrugged. “Because he’s fine.”

“That’s not your call to make.”

“Bah, he’s fine. Right, Glen? You’ll be back on your sofa before that open bag of Cheetos goes stale.”

The two medics stared at me like I’d just slapped their patient across the face. I smirked, took Maddox by the shoulder, and steered him back to the front of the truck.

“You’re an ass,” the blonde hollered after me.