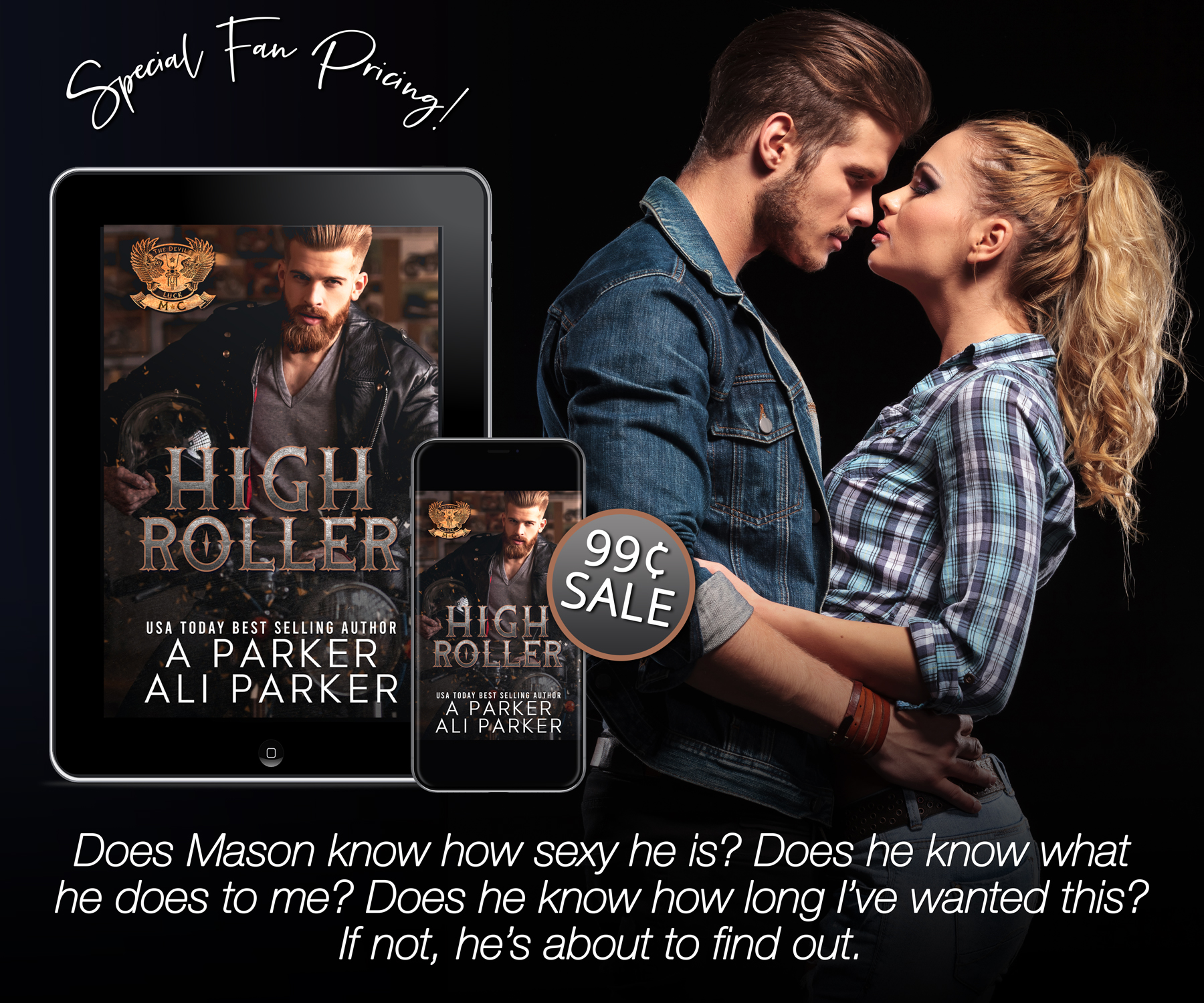 Sweat rolled down the back of my neck and pooled between my shoulder blades. I straightened, shrugged out of my leather jacket, and draped it over the only part of the Well left standing—the stone fireplace in the middle of the cleared lot. The shirt I wore under the jacket had to go, too. The heat was damn near unbearable at this time of year in Reno, and after spending most of the afternoon with a shovel half bent over clearing rubble from the fire, it felt as if we were standing in an oven.

Or a burn barrel.

Tex, standing just up ahead leaning on the handle of his shovel, muttered a string of curses about the heat before lighting a cigarette and puffing on it. We locked eyes and he tipped his chin as if to say, “Why don’t you take a break?”

But he wasn’t the one to decide when we took breaks.

Jackson had been working tirelessly this past week to clear all the debris from the fire at Samantha’s bar. The whole thing had burned to the ground in a matter of hours and all that was left of it was charred wood scattered all over the damn place, ash, and the occasional intact kitchen appliance. The aluminum had held up in the heat, but nothing was operational, so we’d had to order a dumpster to the lot, fill it up with all the shit, and tow it out of there.

We still had at least another three loads to do, and it was back-breaking work.

Jackson spotted Tex taking a smoke break and scowled. “You and your fucking cigarettes, Tex.”

Tex, dressed in his usual all black, smirked from beneath the brim of his hat. “It gives me a reason to take breaks. Not all of us like to work like mules, Black Jack.”

Snake worked near the dumpster chucking loads of scorched wood up and over the edge. He brushed his hands on his pants. “Shouldn’t you be taking it easy, boss?”

Jackson waved a hand dismissively. “I’ve done all the lying around on the sofa I can stand.”

I traded looks with some of the others.

Tex puffed away on his cigarette, his disapproval of our President being out here working clear as day on his face. Snake seemed unenthused too, as did Chips and Toke, who both brushed past Jackson with wheel barrels loaded with more shit. Joker and Royal Flush kept to themselves on the other side of the stone fireplace, which they were tirelessly working to clean up after the fire had licked at the stone, painting every inch of it smoky black.

Jackson had gone through hell eighteen days ago. So had his woman, Samantha Lye, who owned this bar. Bates, the psychopath who’d set the fire, had been hellbent on burning the Well to the ground because Sam wouldn’t sign it over to him. After not getting what he wanted after chasing her down and threatening her for years, he finally succumbed to his desires. Instead of walking away, he set it ablaze.

I still shuddered at the memory of opening the back door to the bar and seeing Sam and Jackson fall out. Jackson had used his body as a barricade and trapped an unconscious Sam between himself and the emergency exit door, which had been locked from the outside by Bates and his goons. Certain he was going to die in there, Jackson had done everything he could to try to buy Sam just a few extra minutes so we might get to her in time and get her out.

For a good five or so minutes, none of us thought our President would get out of there alive. And after we saw him in the flesh?

Well, it didn’t make us any more hopeful.

Jackson had come out of the burning building scorched and simmering. His jacket had been all but ruined, the devil skull and shamrock patch on the back entirely burnt away until it resembled what looked like a shrieking ghoul. The heat melted the leather and stretched the skull’s mouth. The image was seared into my mind, just like scars were seared into Jackson’s palms.

Today as he worked he wore thick gloves over bandages to protect his hands. He had scarring on his neck too and some more mild patches on his face that were healing nicely. Sam had been tending to him ever since, forcing him to take it easy and rest, but Jackson wasn’t the resting sort.

Two weeks was all the rest he was willing to indulge in.

When he’d shown up at the site of the fire this morning, we’d all tried to chase him off. I’d even called Sam, telling her that her ball and chain was here trying to get work done, and she’d not so happily told me that she’d already given Jackson an earful about taking it easy, and he could make his own damn decisions, and what did I expect her to do about it?

So we let him work.

Rather, we all jumped to the hardest and most physically demanding jobs and left Jackson to jump in where he could.

If he caught on to what we’d done, he didn’t say anything.

Snake abandoned his work, pulled off his gloves, and slumped against the side of the stone fireplace. “Fuck me, boss. Couldn’t we have hired someone to do this?”

Jackson shook his head. “We’re not getting anyone involved with this mess. We can’t make it easy for Bates to see who’s on our side and who isn’t.”

He’d been smoke on the wind for weeks. After the fire, nobody heard a word about him. It was as if he’d never been here at all.

But we all knew he had been.

William, my best friend and Jackson’s brother, was still gone. We’d buried him weeks ago. On one hand, it felt like so much time had passed. On the other, it seemed as though I’d been standing at his grave as they lowered his coffin into the earth just days ago.

Bates had shot him in cold blood in the middle of the street. We’d all seen it, except for Jackson. He’d been on his way home from Syria. He’d fought our country’s war while we fought Reno’s and I knew full well that Jackson never imagined he’d come back to his hometown and find it so fucked.

His baby brother was dead. The city had a noose around its neck and anyone without power found themselves completely at the mercy of Bates and his Wolverines, who had no shame and took collections of money from local businesses to keep their operation afloat.

I could only imagine what Bates had been doing with his downtime.

While Jackson healed and we regrouped, Bates was more than likely growing his club.

“Do you think the cops have any intention of busting Bates and his operation?” Tex flicked his cigarette on the ground and put it out under his boot. “Or do you think he has each and every one of them in his pocket?”

“They’d have been arrested already if the cops wanted them off the streets,” I said. “They have enough to put Bates away for a long time and they haven’t even looked at him sideways.”

Jackson nodded. “We’re on our own.”

This was a truth we’d all known for some time now. Ever since William died. It became clear to all of us rather quickly that we couldn’t rely on the law to sort out Bates and his murderous ways. If we wanted to protect Reno and ourselves from his reach, we would have to do it ourselves.

William had tried to do just that, and it got him killed.

Sometimes, when I was in bed at home alone and feeling restless, my mind would torture me with memories of the night William was shot.

The hurt hadn’t gone away.

I’d watched my best friend get shot off his bike in the middle of the road. He’d gone down hard on the asphalt. His bike slid out from under him. The handlebars and exposed engine shot sparks across the pavement, lighting the scene up in bursts of orange as William rolled onto his back and clutched at his chest. The road grew wet and dark beneath him as I went on the brakes hard and turned around for him.

He’d yelled at me to get the hell out of there.

Screamed at me to ride.

Begged me not to tell his brother how it all ended.

To this day, I still hadn’t given Jackson any details about William’s final moments. The truth and the memories were my burden to bear, not Jackson’s.

“What are you thinking about, High Roller?” Chips asked.

I showed them my teeth in a wolfish smile. “All the possibilities of destroying the Wolverines outside of the law.”

Chips grinned back at me. “Fuck the cops.”

Jackson grimaced and shook his gloves off. Nobody said a word, but we all watched out of the corners of our eyes as he flexed his fingers and rolled his wrists. The burns had required some minor surgery to put skin back on his palms, and he’d told me the result was an eerie tight feeling in his hands, and it was driving him crazy. I couldn’t blame him.

Jackson put the gloves back on and either didn’t notice us watching or pretended not to notice. “Pick up your shovels. We have work to do. No more standing around bitching like a bunch of pussies. Sam’s bar isn’t going to rebuild itself.”

“If only it could,” Knox muttered.

“Where is Sam by the way?” Toke asked. “Didn’t she promise to be here putting her back into it just like the rest of us? How’d she get off the hook so quickly?”

Jackson nodded pointedly at the rubble. “I told her to stay home. Pick up your shovel.”

Snake grinned. “What do you expect, Toke? She’s been taking real good care of our boss. I’m sure she’s reaped some rewards.”

Tex hopped on the wagon, seeing an opportunity. “Yeah, Toke, I’m sure if you sucked Jackon’s cock half as good as Sam he’d let you sit pretty in the shade, too.”

Jackson’s glare was as hot as the fire that nearly ate him alive.

Tex seemed unbothered and snickered. “Go on, Toke. Give him a lick and see what happens.”

While the rest of us hooted and hollered with laugher, Toke grumbled.

Jackson shot Toke a warning look. “You and your tongue can work on that side of the fireplace. Stay the fuck away from me.”

Tex laughed and set back to work, putting his back into it. “Look how cute you two are, bickering like soulmates.”

We cracked jokes at Toke’s expense while we worked, and even though I found myself laughing, I wished William was here. This was just the sort of scenario where he really shined. He loved to laugh and he was about the only person who could really cut into Jackson without fear of repercussions.

I wondered if the others missed his presence as much as I did as I went back to work and tried not to think about my friend bleeding out on the street—and his killer still roaming free in our town.