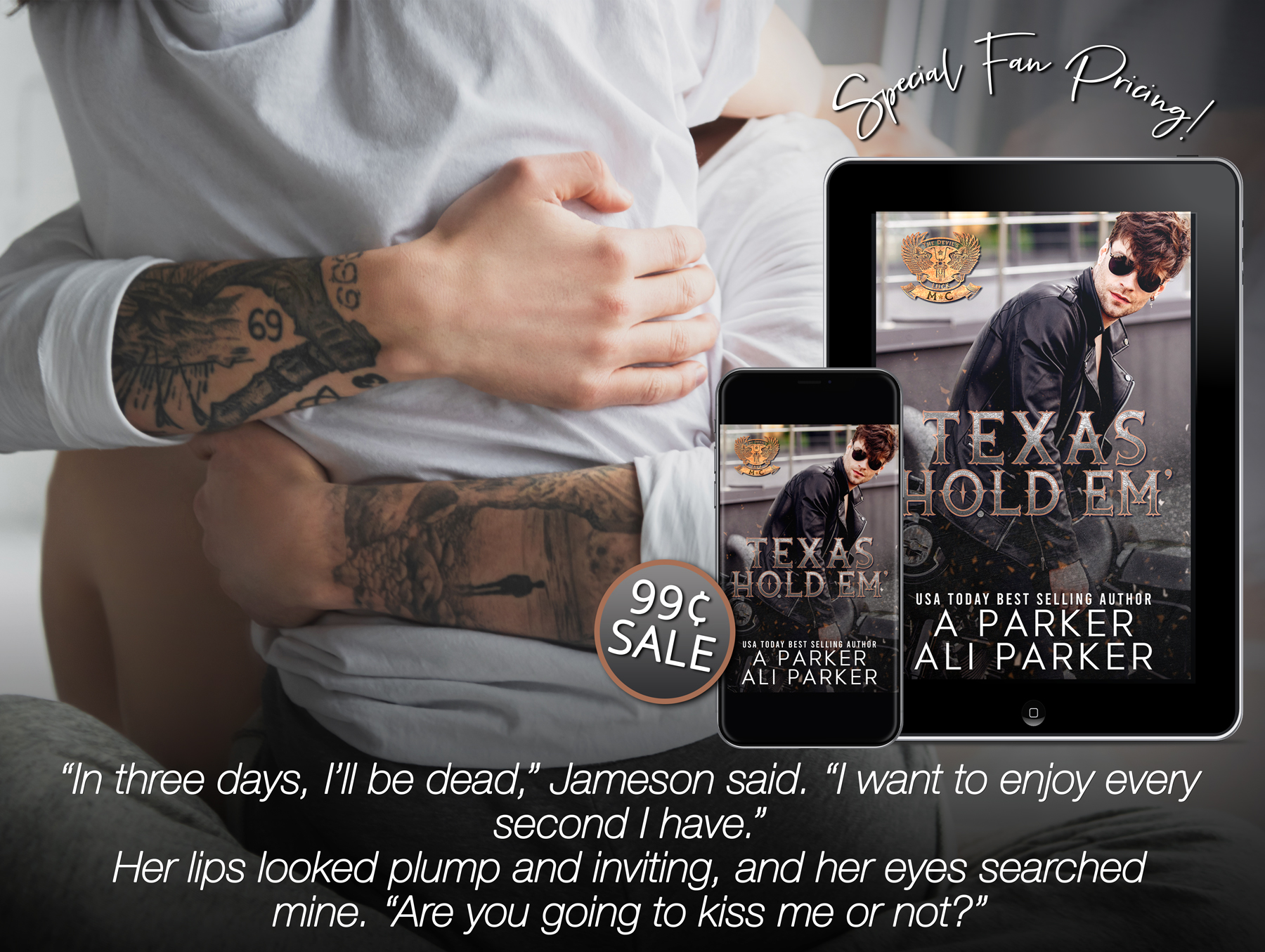 Beads of water rolled off my shoulders as I stepped out of the shower and wrapped my towel around my waist. Gone were the days of being able to air dry buck-ass naked in my own damn house. Now, because of Jackson, I had a guest.

The Texas Ranger had only been crashing with me for three nights and I already felt terribly displaced in my own home. I’d always fancied myself a lone wolf. Sure, I ran with the Devil’s Luck, but when the sun went down and the day closed out, I liked coming home to an empty apartment that smelled like tobacco and leather.

Now it was already beginning to smell like woman.

Carrie had more fucking shower products than any one person had any right to. My shower had four corner shelves, three of which had been empty ever since I moved in four years ago. Now they overflowed with multicolored bottles of products I couldn’t pronounce the names of that were supposed to fix problems I never knew existed, like frizzy hair, uneven complexions, armpit hair, dull complexions, color-treated hair, and oily complexions.

With a sigh, I padded quietly across the main living space of my apartment and shouldered open the metal door beside the fridge. It led out into what I called the pit: a tiny courtyard accessible by my unit only. Still wrapped in my towel, I plucked my package of cigarettes from where it rested on a jutted-out brick in the wall. Inside the box was a lighter that was damn near out of fuel, but it had just enough to light me up. I took a long drag and tilted my head back to exhale, letting the plume of smoke rise over my head and curl up, thinning out and disappearing overhead as it went. The skies were blue, and as I smoked, an airplane roared overhead.

Carrie didn’t smoke, but she claimed to like the fresh air, so she’d already made some changes to my little courtyard.

Before her arrival three days ago, the place had been barren. Broken slabs of concrete had been filled in with loose gravel and that suited me just fine. There were no chairs and I didn’t need any. I came out there to smoke and clear my head and that was all. But Carrie claimed she saw potential in my smoking sanctuary, and once I had all her boxes unloaded from the moving truck, she dragged two patio chairs out there and set them up.

The chairs would have been fine if she’d left it at that, but she didn’t. She brought out a small collapsible side table too. It was neon yellow, a stark contrast to the dull gray bricks. She put a leafy plant with little pink buds beginning to blossom on the table as well as two small candles and a pack of matches. After coming home late last night from a long day of work in the sun on Sam’s bar, I’d come out here eager for a quiet smoke and found Carrie reading by candlelight with a glass of wine in hand.

So I smoked in the bathroom with the window cracked.

The woman was a nuisance. Everywhere I went, there she was.

Well, in my bed of course.

I didn’t need the bells and whistles of a big place. My apartment, along with the other units in the building, used to be nothing but a giant spacious warehouse located down a long road out of town. There wasn’t much else around besides a pizza joint and a gas station and I liked it that way. Eight years ago a developer bought the warehouse, cleared it out, and sectioned it off into rental units. I rented for the first year until my landlord put it up for sale, and I bought it off him. I had no reason to leave. The place was cool, quiet, and secluded. Nobody bothered me here.

Carrie had initially insisted she sleep on the couch since she was putting me out, and even though I’d been inclined to accept her offer, I slapped on my best gentlemanly smile and insisted I’d sleep on the couch. This was temporary, after all, and a lady deserved a room with a locking door for privacy and security.

She’d been grateful and wasted no time changing my sheets to replace with her own—atrocious pastel yellow things with little white flowers all over the place. The woman was a walking and talking contradiction. A mere week and a half ago she was on her hands and knees beside Mason, doing everything she could to keep him and Suzie alive. She was tough as nails. Hardcore, relentless, and, as Mason had said, completely fearless.

And yet she liked bedsheets with little flowers on them.

Maybe it was the southern girl in her.

I took another long drag and resented that my smoke was almost done. I had another long day ahead of me at the bar. Things were slowly coming together but we were getting to the nitty-gritty shit now before we’d have to bring contractors in like electricians, plumbers, drywallers, tilers, and all that shit. We could have done it ourselves, but Jackson reasoned out that we needed to make sure we didn’t get too caught up in busy work when Bates was watching from the sideline.

Mason’s brush with death at the hands of Bates and his new enforcer, a bastard named Moss, had been the wake-up call we all needed.

I flicked my cigarette on the pavement stones and watched the ember die before I went back inside and locked the door behind me. I tightened the towel around my waist as I moved through the kitchen and looked up when the bedroom door opened with a soft click.

Carrie stood in the doorway wearing an oversized T-shirt and her blonde hair in a messy knot on top of her head. She reached her arms up and indulged in a stretch that lifted the shirt up over her thighs and hips, showing off a pair of purple underwear cut high on her hips.

Her cheeks turned pink when she spotted me. “Oh. Morning. I didn’t see you there.” She tugged hastily at the end of her T-shirt.

Her blue eyes followed me as I went to the sofa and collected my jeans and black T-shirt. She chewed on her bottom lip and folded her arms, leaning one shoulder against the doorframe. “I was going to run out and get coffee and bagels.” She cocked her head to the side as I shrugged into my shirt. “Can I bring some back for you?”

“I’m not that much of a breakfast person.”

“Is there such a thing?”

Smirking, I stood behind the sofa, the cut of the backrest just high enough to hide my member as I dropped my towel. “There is.”

Carrie did a valiant job of keeping her blue eyes fixed on her fingernails while I put my jeans on. “For someone with your, um, muscle mass, I find it surprising that you’d skip breakfast. Aren’t you going to be working on the bar today?”

“Then there’s no need for you to worry about feeding me. Or my muscle mass,” I added slyly. “I’m a big boy. I can take care of myself. And I assume you can, too. I’ll be gone most of the day. You can do what you want while I’m gone.”

Carrie arched a blonde eyebrow dramatically. “Oh, I can, can I?”

I picked up my wet towel. “That’s what I said.”

“Well, that’s what I had every intention of doing.”

“What I want,” she huffed. “I have every intention of doing what I want.”

I frowned. Had I missed something here? What the hell were we talking about? “Good.”

“Good.” She nodded, before muttering, “I can’t for the life of me figure out why Jackson wanted me to stay here.”

I pointed around at the cinderblock walls of my apartment. “The acoustics are pretty good in here.”

Chuckling, I hung my towel on the bathroom door and raked my fingers through my hair, taming it back off my forehead and into place. “Could be worse, sweetheart. You could be crashing at Gabriel’s. Or Abel’s. You think they’d let you sleep in their bed without trying to get in with you?”

“So I’m supposed to feel lucky?”

She snorted and pushed off the doorframe. With that, she turned her back on me and disappeared into the bedroom, where I assumed she was getting changed, but I didn’t really care.

I knew her type all too well. I’d been just like her, after all.

Like Carrie, I’d once worn the Texas Ranger badge. I’d grown up in Austin, just like I assumed she had, and I was the good old boy who followed the straight and narrow and did what he was told.

Until the straight and narrow blew up in my face and I learned I could get a lot more done when I wasn’t wearing the badge and brushing shoulders with cops.

Carrie was living that experience right now. She’d discovered the corruption we all knew existed in the Reno police department. She was seeing with her own two eyes how flawed the law was here, and she had to be wondering if it was like this in other places. And even if it wasn’t flawed, rules and regulations kept things stagnant. Real bad guys, the ones who took the time to look into the loopholes and play the smart game, could evade arrest and justice at every turn if they were clever enough. Like Bates.

Her badge wouldn’t help her put a stop to his reign of terror. She had to be coming to terms with that.

It probably wasn’t easy for her.

I grabbed my leather jacket from the hook at the front door and called out to her that I was leaving.

She stuck her head out the bedroom door and gave me a forced, cheesy smile. “Bye bye then.”

Gritting my teeth, I wrenched the door open and stepped out into the dimly lit hall. It was hot and stuffy as always, and a bead of sweat formed on my upper lip as I locked the door behind me. I marched down the hall and out the emergency exit door, where my bike was parked beside my beat up old Chevelle. The damn car needed a lot of work. She still ran, albeit poorly, and I had grand plans of fixing her up when this mess with Bates was done.

I hopped on my bike, a three-year-old Iron 883, and used my heel to release the kickstand. The engine rumbled low and menacing like a predator in the wild. I’d only owned the bike for about six months and liked the ride. My older bike had been a larger, heavier monster, and I liked how the smaller bike handled. William had taken it for a spin a few weeks before he died and claimed he wanted one for himself.

He never got around to it.

I opened up the throttle and tore out of the back lot behind the old warehouse building. The back tire kicked up gravel before the tires hit asphalt and made short work of the long road back into town.

With any luck, Carrie wouldn’t entertain herself in my absence by adding throw pillows to my couch or using old beer bottles as vases for fresh-cut flowers.