Read Chapter One of Our Tense Love Affair… – Ali Parker

Read Chapter One of Our Tense Love Affair… 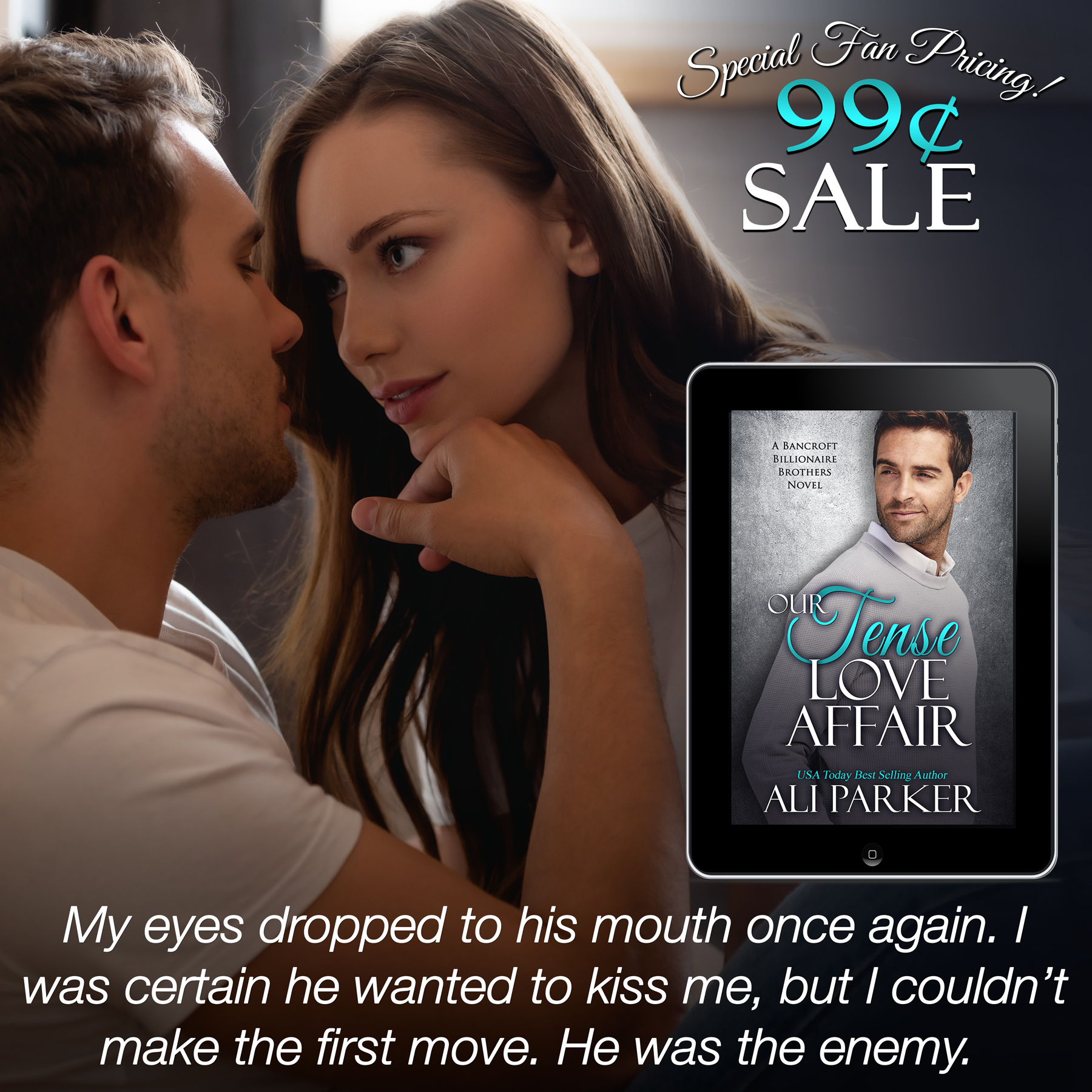 I stared at the owner of the Lamplighter Theater. He had called and asked me to meet with him. I thought he was going to congratulate us on an amazing run with our new play. We actually made a little money. The reviews in the paper had been mostly positive. There was always one guy that had to be a jerk. You couldn’t win them all.

My play, my heart and soul, had done well. It felt good to have some success under my belt. It had been a long road to get that success. I’d acted in plenty of shows, but this one was mine. I created it and helped write it. My vision had come to life in the sets and costumes. We had done it all on a shoestring budget. With a little fame, we might be able to do something bigger next time. We were already looking at some plays that had not been done. I was all about giving a budding playwright a chance. Not to mention it was cheaper than going with one of the famous playwrights.

But that was not what I was hearing now. My mouth was dry and there was a strange ringing in my ears. “I’m sorry, what did you say?” I asked with the hope I had somehow misheard him.

“Megan, your play was spectacular but it’s not going to generate the revenue this place needs to stay open,” he said.

He was trying to be gentle. I understood that, but it didn’t change the words. They were ugly and cruel. “But I don’t understand,” I said and got to my feet. I couldn’t take this sitting down. I had to pace. I had to move.

“I told you a year ago I was putting the theater on the market,” he said. “I inherited this building, and quite frankly, it costs me more in taxes and insurance than I make.”

“We’re going to start pulling in some real money!” I argued. “You saw our opening night. We had the entire Bancroft clan here! They told all their friends. Our next show is going to be even bigger. You have to give us a chance!”

“Phillip!” I cried out and stomped my foot. This couldn’t be happening. I wanted to throw a straight-up temper tantrum.

“Megan, I don’t know what to tell you,” he said and threw up his hands. “I didn’t want to, but I have to be logical about this. I have a family to support. I’ve tried to be as supportive as I can. I wanted you guys to succeed. I love your little company. I did see your play and you guys did amazing, you especially.”

“Is the owner going to keep it open?” I asked. “Can I have their name? Maybe I can negotiate a new rent agreement.”

He looked away, which told me this was worse than the theater simply being sold. “Megan, I don’t know how to say this. Maybe you should sit down.”

I dropped my chin to my chest and felt a tear slide down my cheek. I just knew what he was going to say. It had been a long time coming. We all knew it was a matter of time with the properties around the theater being snatched up. I slowly walked to one of the folding chairs and flopped down. “Tell me.”

“The person buying the building intends to tear it down.”

My eyes widened and I stared at him with complete, utter shock. “No!” I shouted and was once again out of my chair. “No, no, no! He can’t do that! This place is iconic. It’s been part of the neighborhood for decades. Some of the greatest names on Broadway once graced this stage. There is history here. It’s like tearing down a monument!”

“I’m sorry, but I did try and get historical recognition. The building is only eighty years old. It isn’t old enough to be special, and with the lack of updates, it would cost a small fortune to bring it up to code. I hate to say it, but logically, tearing it down makes the most sense.”

“Phillip! I don’t understand how you can say that. Look around you. History oozes from the rafters. The chairs and the walls, everywhere. Even the curtains are old and nostalgic.”

“Unfortunately, nostalgia is only nostalgic to those that have a connection,” he said. “People moving into the neighborhood don’t know about this place. They don’t care. Developers see this building as an opportunity for something bigger, fancier and income generating. We just don’t have what it takes to keep this little gem around. I’m sorry.”

There was no point in crying and arguing. “When?” I asked.

“It’s a cash sale with a quick close,” he said.

“What does that mean?”

“We close the second week in January,” he said.

He nodded and looked away. “From what I understand, there are already contractors waiting to get in here. I would suggest you and the company take anything with sentimental value. The contents of the theater aren’t going to matter to him.”

My heart was shattered. “What about tonight?” I asked.

“The theater is yours tonight,” he said. “Have your party. Enjoy yourselves. You deserve it. Your success with this play is all yours. Don’t let this news take away from your success.”

I nodded and wiped the quiet tears sliding down my cheeks. “Thanks.”

“I’m really sorry,” he said. “I wanted to hold on to this place, but I just couldn’t do it. I know I sound greedy, but when I look at the money it cost to keep this place running, I had to take the offer.”

“I understand,” I said. “I don’t blame you. You’ve got kids in college. I can’t expect you to carry me through my pursuit of happiness.”

“Will you be here tonight?” I asked.

I left the theater and took a moment to stare up at the old, fading building. The poster from our play was still hanging in the window. I had one at home, but I was taking that one as well. I dreaded telling the rest of the company, but they all needed to know. I didn’t want anyone wasting time searching for new plays or hanging their hopes on dreams that something big was right around the corner.

I walked back home feeling stunned and confused. I didn’t know where to go from here. My first instinct was to call Selena and cry my heart out. But it felt wrong to tell her first. My right-hand in the company deserved to know first.

“Ruth?” I said when she answered the phone.

“I’m headed over there in ten minutes,” she said, out of breath. “I was just picking up the decorations.”

“Trust me, I would love a negative review right now,” I muttered.

“I’ll be over there in an hour to help set up for tonight,” I told her.

Initially I was going to tell the whole company we were looking at the end, but then I realized I should let them have this night. I didn’t want to be the Grinch. I tried to push the sadness away. Tonight was all about being happy and celebrating the success we had with our play.

After changing into jeans and a warm sweater, I headed back to the theater. It was just Ruth in there. “What do you think?” she asked.

“You work fast,” I said with surprise. “Shoot, I don’t know why I showed up.”

“Very funny.” She laughed. “I have a bunch of snowflakes to hang.”

“Not so fast, young lady,” she said while wagging her finger. “What’s on your mind? Don’t say nothing because it’s all over your face. You used up all your good acting skills last week. What happened?”

I looked around the lobby of the theater. She had already done so much work and it was pretty and festive. “We’ll talk later.”

“We should call a meeting after Christmas,” I said.

“To talk about our next project?” she asked.

“Megan Haulde!” she scolded and put her hands on her hips.

I couldn’t completely destroy her Christmas and decided to go with a version of the truth. “The theater has been put up for sale.”

She sighed and shook her head. “I think we all knew that was coming.”

“Don’t be too upset about this,” she said. “We’re not in the best neighborhood. I can’t imagine this old crumbling building is going to attract a lot of attention.”

I forced a smile. “You’re right. I just get myself worked up.”

“You need a drink.” She laughed. “It has been a wild few months. Tonight, you get to have some fun and party!”

“We all deserve a drink and a good time,” I agreed.

She walked to me and patted my arm. “It’s going to be okay. The theater might get a little free advertisement with the success of our play. That could be a good thing. If we get a new owner, we’ll finally get those updates we’ve all been wanting. Don’t look at it as a bad thing. We’ll be fine.”

“Alright, now, let’s finish getting this place fixed up. We need to get home and get all gussied up. We get to pretend we’re rich and famous for a night. I think we should have a red carpet. Let’s really do this right.”

“I think we might be a little late for that,” I said and tried to keep my smile in place. “Thank you for helping get this place pretty for tonight. I want everyone to have a good time.”

“They will,” she said. “They will absolutely love this.”

I did my best to push it all away. It felt like I was carrying around bricks on my shoulders. This company had been my brainchild. I recruited people to do this with me. I promised them we would have fun and make a little money. I never promised them fame and fortune, but we were all dreamers and we all had stars in our eyes.

Now, I had to be the one to dim those stars.