Read Chapter One of My Feisty Fling… – Ali Parker

Read Chapter One of My Feisty Fling… 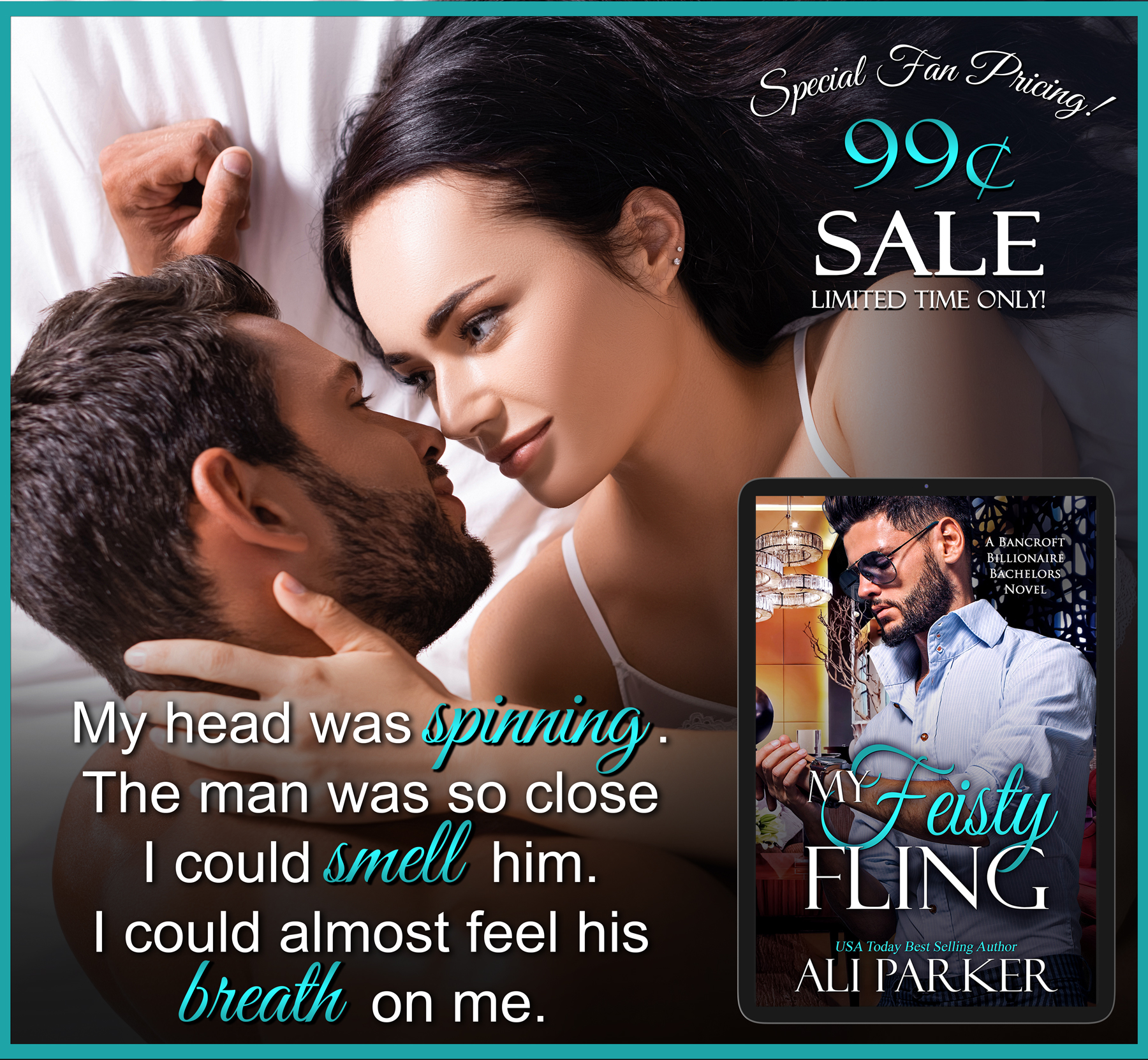 GRAB YOUR COPY FOR ONLY 99¢ FOR A LIMITED TIME!

“I have to come with you,” my older brother Reese said again. He pounded his fist on the table to show his frustration.

“I’m sorry, but why exactly do you think you get to tell me what I can and can’t do? He’s my father, too.”

“Because this is what I do,” I replied.

I wasn’t entirely sure her motives were all that pure. She and my brother had just gotten back together after too many years apart. I was happy for them both, but this was not the time to celebrate. Not yet. There were more pressing issues, like rescuing our father.

Reese glared at me. “I’m the one who told you Dad was missing.”

“Yes, and I’m the one that got the ransom call,” I retorted. “I don’t know why we’re arguing. You called me because you knew I could find him. That’s what I’m doing. I’ve got a flight to Singapore first thing tomorrow morning.”

He shook his head and rubbed his jaw like he always did when he was frustrated. He was my older brother by a year. We had been close growing up, but the last fifteen to twenty years had led us down different paths. He was the family darling. He was following in our father’s footsteps and sliding into the head of the company position. I wasn’t jealous. I didn’t want it. It was just hard standing in his shadow all the time.

“You don’t know who you’re dealing with,” Reese persisted. “If they have Dad, what makes you think they won’t snatch you too? What if you’re not worthy of a ransom and they kill you?”

“Jett, I’m serious,” Reese said. “You said these guys demanded sixty billion. Sixty fucking billion. I don’t have it. I certainly don’t have it twice.”

“You called me because you weren’t getting anywhere with the police,” I said. “I found him. I’m the one who’s getting shit done. I don’t know why we’re wasting time. I need to get over there and figure this shit out.”

“You’re going to take on how many guys?” Reese growled. “Newsflash, you aren’t Rambo, Superman, or whatever superhero.”

“And you think you are?” I countered.

“You’re a private investigator,” he said with his voice lowering. “You need an army.”

“We don’t know what we’re dealing with for sure,” I said. “Before we start burning down the house, let’s find out what’s happening first. I want to know why this is happening. I need to understand what this deal is they are accusing him of sabotaging. When I have more information, I can formulate a plan. I’m not going in blind. I’m going over and doing some research. We need to understand who these people are.”

Reese shook his head. “There is no way Dad would sabotage a deal. If he goes into a deal, he sticks with it. You know that.”

“I don’t know shit.” I shrugged. “I don’t get involved with the business.”

“I’m telling you he didn’t back out of a deal and leave anyone holding the bag,” Reese snapped. He was taking it very personally. “Dad makes money by choosing the right deals. He is not going to back out of what would have probably been a very good investment. That’s what we do. We build high-rises. It doesn’t make sense. He wouldn’t go through the hassle of hiring architects and getting permits. Something isn’t right.”

“Which is why I need to get over there and do what I do,” I said. “I need to find out who he was in bed with. I need to understand who these people are and what they’re capable of.”

He didn’t finish his sentence.

Thea put her hand on his. “Let Jett do his job,” she said softly. “He can answer your questions once he investigates.”

I was glad she was the voice of reason. I knew I had a hot temper. I didn’t particularly like answering to anyone, which was why I did what I did. I worked for no one. I worked with no one. Turned out, I wasn’t a very good team player.

“Should I try and put the money together?” he asked.

I snorted. “Because you can?”

“Guys,” Thea intervened. “You both want the same thing. You’re both concerned about your father. Take it from me, you need each other. You will want to lean on one another. Don’t get mad at each other. Get mad at the guys that took him.”

“Tell me what the plan is,” Reese asked with resignation.

He was whipped. His woman told him to jump, and he asked how high. I supposed it wasn’t a bad thing, but it was strange to see the guy listening to anyone. He was as bullheaded as I was. He just hid it better. I tended to be abrasive. At least that was what I had been told.

“My plan is to go to Singapore and do some asking around,” I said. “I need to find out who we are dealing with. I need to know if this is a hoax, someone taking advantage of the situation.”

“I put out some feelers, asked questions,” I explained. “Someone may have decided to cook up a con. They might be making the whole thing up. Reese says it’s not possible our father would back out of a deal. I need to investigate. If it’s real, we take the next steps. If it’s not, I go back to the drawing board and start investigating deeper into the possibility there was another business deal gone awry. Where there’s smoke, there’s usually fire. I just have to find it. I have to be there. I can’t make phone calls and get second and thirdhand information. I need to have boots on the ground.”

I held up my hand and stopped Reese before he asked the question. “Shit happens all the time,” I said. “We can sit around here sipping overpriced coffee and talking about what we should do, or I get on a plane and do something. Yes, it’s a risk. If we do nothing, he’s dead. You don’t have the money. I don’t have it. We don’t know when they want it. We don’t know if they’ll kill him once they get it.”

“And we don’t know if he’s alive,” Reese replied.

I nodded and grabbed my phone from the table. “No, we don’t. I’ll find out. Don’t call me. I’ll call you and let you know when I can. Don’t blow up my phone and don’t you dare come after me. Don’t send anyone. Let me handle this.”

“How are we going to know what’s going on?” Reese asked.

“And if you don’t call?” he asked. “How long am I supposed to wait before I do something?”

I smirked. “What exactly are you going to do, Reese?”

He frowned at me. “You’d prefer I do nothing? I’m supposed sit on my ass while you are getting yourself into God knows what trouble? What if they snatch you? What if you get killed? Am I supposed to just sit here and go on with my life?”

“What’s the alternative?” I asked. “What are you going to do if I don’t call? If I don’t go? Your police can’t do shit for you if he is truly in Singapore. With the information I’ve gathered, I’m leaning toward him actually being there. I just need to narrow down the who. Once I know who, I can figure out where he is being held.”

“Please, Jett. Please call. I hate you going in alone. It’s another risk.”

“That’s what I’m worried about,” he muttered.

I left the coffee shop and stepped into the rain. I pulled my hood up and walked around the corner. My hotel was a block away. I was only in town for a day, just long enough to verify information with Reese. Then it was off to Singapore. Going by myself was both dangerous and safer. I could blend in. I could be anonymous and go unnoticed. If I showed up with a fleet of brothers determined to save our dad, it would draw attention. I operated in the shadows. I had years of training to fall back on. Reese would stick out like a sore thumb. He walked into a room and people noticed. He looked like money. Money drew attention.

I walked into my room and grabbed my worn backpack. It had been around the world with me more times than I could count. I flopped on the bed and checked the contents. I was flying commercial which meant I was going to have to leave behind my gun. I wasn’t worried about finding another one when I got to my destination. I had run in dark circles for years. I knew how to get information, weapons, and drugs if I wanted them. It was all about knowing how to act, talk, and carry oneself.

I tossed in my passport, ten grand in US dollars, and another five grand in Singapore currency. Money talked. I needed information and I knew I was going to have to pay for it. Stopping by an ATM wasn’t really an option. I had sent out my minimal laundry, which was now waiting to be packed in my duffel. I traveled light and never checked a bag. I needed to be able to move quickly and relatively unencumbered.

I couldn’t look like a tourist, unless that was the cover I was using. I wasn’t. I couldn’t hide the fact I was American, but I could disguise it. Americans were easy targets. I chose to dress down and used a different name. If anyone knew I was a Bancroft, no one would talk to me.

I reached into my wallet and pulled out the picture of my father. It was strange, but I almost didn’t remember him. I did, but I didn’t. It had been a while since I had seen him last. Was it at a birthday party? Maybe it was last Christmas. Or the Christmas before. I honestly couldn’t remember.

I knew I was the proverbial black sheep. It was an image I cultivated. I didn’t fit in anywhere. Not the military, not the police force, and definitely not my wealthy and powerful family. I felt like a square peg trying to fit in a round hole. It wasn’t working. Being a PI and working for myself was about the only thing that worked in my life.

I wasn’t suitable company most days. I had a short fuse and an attitude that bordered on hostile. It wasn’t like I meant for it to be that way. It just happened. People pissed me off and annoyed me to no end. I had been alone most of my life, even when I lived in a busy house with my family. I was always on the outskirts.

If I went to Singapore and things went bad, what was the loss? I rarely talked with my family. They usually didn’t know what continent I was on. If I could get Dad out of this jam he was in, whatever came my way would be worth it. I wasn’t a big prize, but I could pretend I was. I could play up my value to the family and offer myself in exchange for my father’s freedom.

No one was going to miss me if I was gone. And I knew I had a better chance of surviving whatever it was my father was currently dealing with. I had a better shot of getting out of trouble than him.

This was the one thing I could do for my family.