Read Chapter One of My Taboo Love Affair… – Ali Parker

Read Chapter One of My Taboo Love Affair… 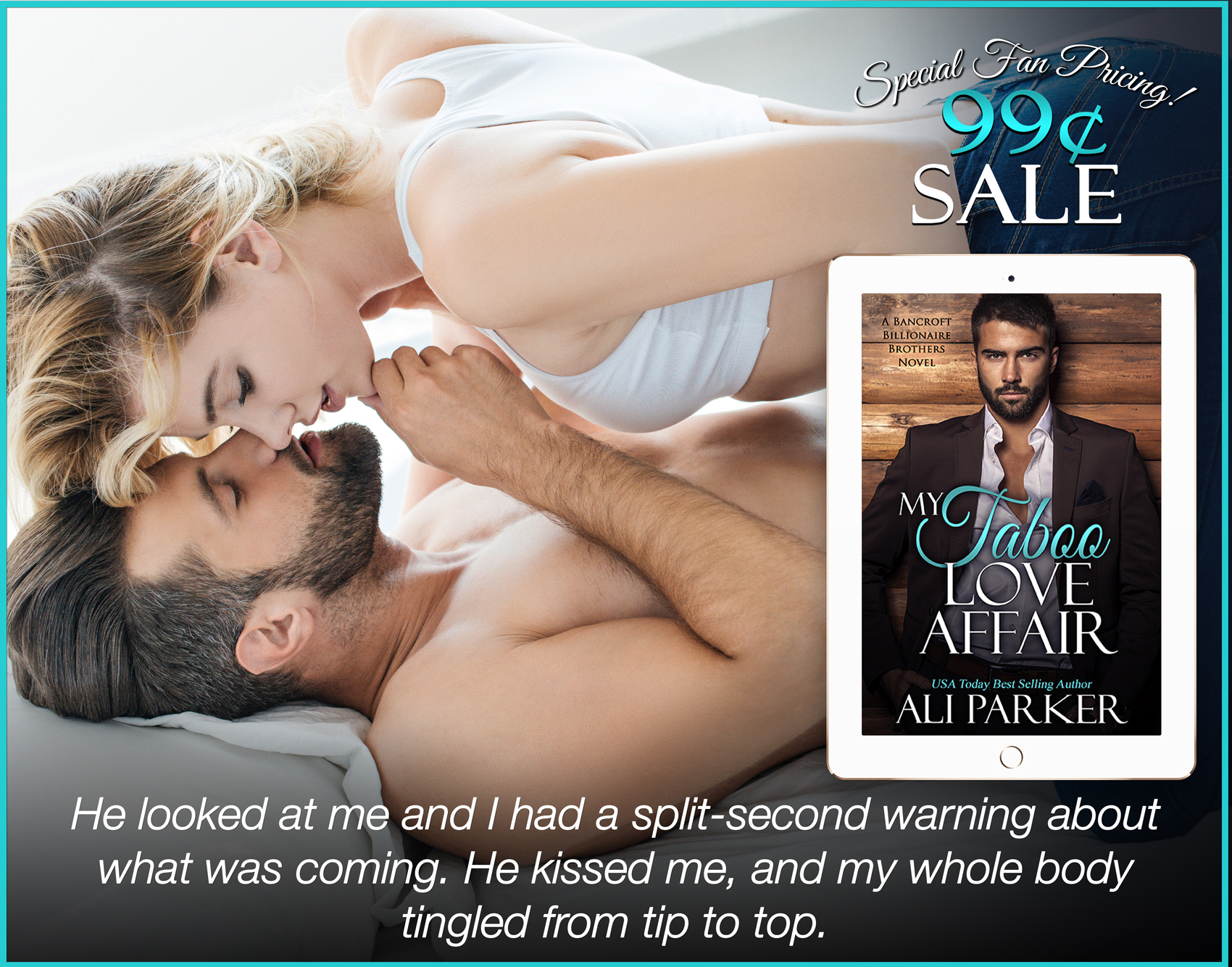 Family could be complicated.

My ass rested against the kitchen counter in my mother’s house. I had a bottle of water in one hand and my phone in the other. I used my thumb to scroll through my email while listening to my mother and her husband discuss the difference between organic and normal tomatoes. I didn’t care and was therefore staying out of the discussion that was bordering on an argument.

“Fine,” Brent, my mother’s husband and I supposed by default, my stepfather, announced.

“Don’t say it,” she said with her finger held up. “Don’t you dare say it. There is a difference. A huge difference. Tyler, make yourself at home. I’ll be back in a flash. I cannot serve my famous BLTs with crappy tomatoes.”

“Okay, Mom,” I said without looking up from my phone.

I heard keys jangling followed by the front door closing. Brent jerked open the refrigerator and stared at the contents. “You’re not going to find a beer in there,” I said.

He slammed the fridge door. “Dammit.” He opened it up and grabbed a can of Coke before slamming it again. “I’m not mad.”

“I’m not upset that I can’t have a cold beer on a Sunday afternoon,” he said.

I put my phone away. Clearly, there was trouble in paradise. “I don’t think it would be abnormal if you were upset. When I leave here after dinner, I’m going to go home and have a drink. You know it’s your choice to be here. You could divorce her.”

He stared at me with the can pushed against his lips. “I’m not going to divorce your mother. I love her.”

I grinned. “I know. You’re a good man, Brent. Thank you for sticking by her. I know Taylor and I don’t always seem like it, but we support her. If you weren’t in her life, I don’t know how well she’d be doing. You’re her rock. I know she gets testy. You know it’s not about the tomatoes.”

He sighed and nodded. “I know.”

“It means she’s dying for a drink.”

I smiled and gave him a soft punch on his shoulder. “You’re a good guy. Thank you.”

“I love her,” he said seriously. “I know you guys were worried about me walking out on her, but I won’t. I knew about her issues when we got together. I knew there were going to be tough times. If she wants to yell at me about getting the wrong tomatoes, I’m okay with that. If it keeps her from getting a drink, I can handle it.”

“Then I guess one of us will be picking her up and bringing her home.” He shrugged.

“She’s good. This is just one of those things. It will pass. I need to run across the street and take back the neighbor’s drill. Make yourself at home.”

I smirked when the front door closed again. I came over for dinner, after being invited and practically begged to attend, and I was sitting in their house alone. If our family wasn’t dysfunctional, it wouldn’t be functioning at all.

I saw the Sunday paper sitting on the table and helped myself. I couldn’t remember the last time I had read an actual newspaper. I flipped through the pages, not finding anything all that interesting. Then I saw them. “You’re shitting me,” I muttered.

“What the hell did they do now?” I muttered again. They were always stepping in it. This was exactly why my twin and the other half-brother that knew about me and Taylor avoided the Bancrofts at all costs. We wanted nothing to do with them. They courted attention. We preferred to stay under the radar. Off the radar altogether. So far, it had been working for us. No one knew or suspected we existed.

This latest push for publicity under the guise of not wanting publicity was getting old. They were always making headlines, even though they claimed they hated the attention. I couldn’t judge them because I didn’t know them, but they annoyed me. Maybe it was jealousy. My brothers, if I could even call them that, had everything. They had a whole family unit. They grew up in a mansion with everything.

Every little thing they wanted was handed over to them. They didn’t have to wait until their mom could scrape together enough money after working doubles at the hospital. They didn’t have to put the bread in the microwave every night to keep the mice that lived in the walls of their house from getting into it. They didn’t have to wear their jeans halfway down their ass to keep them from looking like highwaters after hitting a growth spurt and their mother couldn’t afford new clothes.

“Shit.” The tomatoes made sense. Mom had obviously seen the article. “Fucking Bancrofts.”

She was three months out of rehab. Her fourth or fifth stint. I couldn’t even remember how many times she’d been in rehab for her alcoholism. The alcoholism I attributed to Art fucking Bancroft. He knocked her up when she was a kid. Barely legal. She’d been a freshman in college, and he knocked her up.

Lucky for her, she didn’t get just one baby. She got two. He gave her fifty grand to shut up and stay away. God forbid my mother’s pregnancy interrupt his perfect life with his perfect wife and their perfect sons. He got her pregnant and never looked back.

She put herself through nursing school while raising twins on her own. Her alcoholism was his fault. I didn’t care what the therapists and experts said. He did it to her. He ruined so many moments in our childhood because our mother was too drunk to go to our games or school functions.

I took the paper and put it in the trash. She did not need to read it again and again. I wished there was a way we could block them from her life altogether, but they were everywhere. Every time we turned around, they were in the news for one thing or another.

I heard the front door open and close. My mother breezed into the kitchen with a bag of tomatoes. Nothing more, just tomatoes. “Now, I can start dinner,” she said with a smile. “How are you? You’ve been quiet.”

“You weren’t here,” I reminded her. “How would you know if I was quiet?” I was teasing her. I wanted her to smile.

“You’re very lucky you’re cute,” she said. “If these tomatoes weren’t so expensive, I would throw one at you.”

“Did you make potato salad?” I asked.

“You know I did and no, you can’t have any. You can wait until your brother gets here.”

“Taylor has a woman to make him potato salad. I should get to have more than him.”

She rolled her eyes and got started frying bacon for the best BLTs in the world. It was a simple dinner, but it was going to be good. It would be better washed down with a cold beer, but no one drank in front of her. Not yet. Not when she was still in a fragile state. Not when she’d just had the Bancroft family thrown in her face.

“How have you been?” she asked. “You’ve been so busy lately.”

“I’m good. I just signed a new client. I can’t tell you who, but I will tell you it’s huge. It’s e-commerce. We are completely revamping their site, which by the way was damn near an antique. I don’t know who did the coding, but it’s a disaster. I don’t know how they managed to get to where they are with such a messy system. By the time I’m done with it, they’re going to have the easiest, most user-friendly site in the world.”

She laughed and flipped the bacon. “I’m so glad you’re humble.”

“We’re here,” my brother called out.

He walked into the kitchen with his lady, Megan. “Hello,” I said and gave her a kiss on the cheek.

“I’m so glad you both made it,” Mom said and gave them each a hug. “Have a seat. This won’t take long. I know you guys want to get back to the city before it’s too late.”

“Can I help you with anything, Renee?” Megan asked.

Megan and Taylor exchanged a look. It was something I noticed they did a lot. They could have an entire conversation with a simple look, without saying a single word.

Mom spun around. “This year!”

“Megan, can I ask you something?” I asked with dead seriousness.

“Have you hit your head? Tripped recently? Possibly been exposed to carbon dioxide?”

She frowned and shook her head. “No, I don’t think so, why?”

I shrugged. “I was just wondering. I don’t understand why anyone would want to marry him. Not willingly anyway.”

“I cannot wait to hear all the details!” Mom exclaimed. “A fall wedding!”

This was good. This was exactly what she needed to distract her from the Bancroft nonsense. Taylor gave me a look. We had twin telepathy. I gave a very slight shake of my head to let him know I would tell him later. He obviously picked up on the fact there was something wrong.

It was fifteen minutes later when we were all seated around the table. “So, can I count on you all coming next weekend?” Mom asked.

“Next weekend?” I asked. I was going through birthdays in my head. None were coming to mind.

Easter. I had forgotten. Not that I cared much. It wasn’t like I was waiting for the Easter Bunny. “I can do that.” I nodded.

Taylor gave me another look. Typically, we would both try to get out of another family meal so soon after this one. But we were very aware of the signs Mom was struggling. We’d been living with her alcoholism for most of our thirty-two years on the planet. We knew the signs better than anyone else. This was a time to rally. We needed to be close and keep her on an even keel. I glanced at Brent, who gave just the slightest nod, thanking me. He too knew there was a struggle happening. Her demons could be fierce.

“We’d love to!” Megan answered. “I can bring a broccoli salad if you’d like?”

“Yes.” Mom’s enthusiasm was a little extra. That was a sign. “I was thinking I would make a pork tenderloin, scalloped potatoes, and a pistachio dessert.”

“Jace’s parents are still out of town, right?” she asked.

“Bring him,” she said of my best friend.

“I don’t know if he’s going to want to come out here.”

“Nonsense. Bring him. Taylor, ask if Karrie Anne and Jarrett would like to come as well. I’d love to make a basket for the boy. I so like when he comes around.”

“I’ll ask,” Taylor said. “She might already have plans. From what I understand, there’s a new man in her life.”

“Good for her!” Mom smiled. “It can’t be easy raising a little boy on her own.” She laughed and waved a hand. “Wait, I know for a fact it isn’t easy. How is Jarrett? Are you still doing the Little Brother program with him?”

I gauged Megan’s response. Early on in their relationship, there had been some jealousy issues with Karrie Anne. She had kissed Taylor once and then apologized saying she was lonely and he wasn’t really her type. He signed up to be a big brother and had become very close to them. Then Megan came along, and things got a little rocky. They were good now, though.

It was the rest of the family I was worried about.