Read Chapter 1 of Read Between the Lines – Ali Parker

Read Chapter 1 of Read Between the Lines 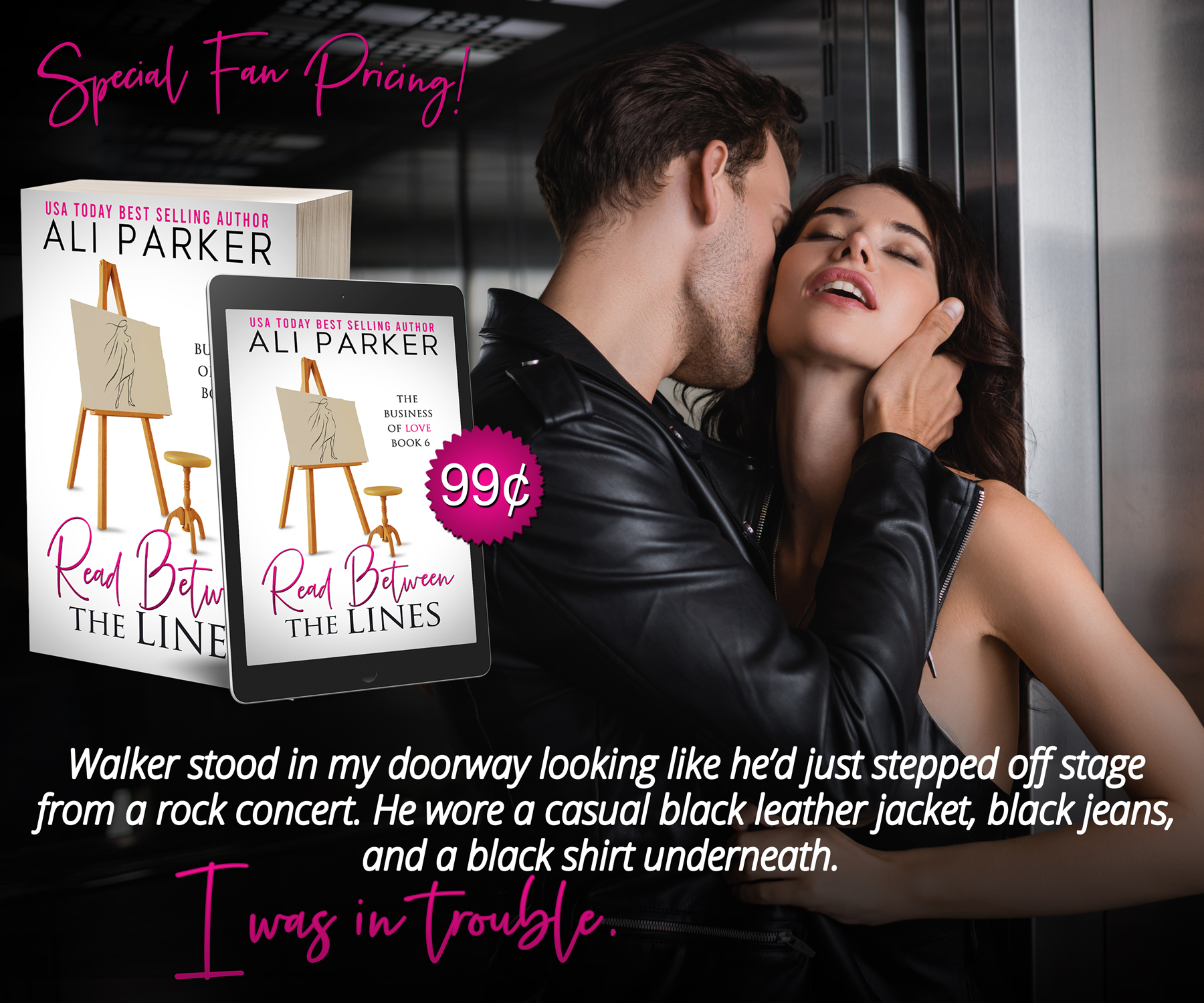 I’d missed the cherry blossom trees that lined the narrow and somewhat precarious street I lived on while I was gone. The asphalt was cracked and patched over countless times with slick black tar that invited cars to hydroplane on wet days. In the spring, there were many of those. Parked cars lined both sides of the street. It was supposed to have two lanes, but due to the dense amount of housing, there wasn’t enough room to park. One side of the street, my side, was comprised of three-story townhomes in terracotta brick. One stairwell went up half a flight to the front door while another plunged down from the sidewalk to suites below street level. Most of them were rental units.

Hence all the cars.

The class difference didn’t matter here. The street, despite how crowded and busy it was, had always been beautiful, and the bright pink blossoms soaking up the vitamin D on this summer morning were a showstopper.

My cab driver came to a slow stop to go over the first set of speed bumps down the lane.

I leaned forward and gripped the back of his headrest before pointing up ahead out the windshield. “I’m the sixth one on the right,” I said. “I don’t think there will be a spot to park, so I’ll just hop out.”

His eyes flicked to his rearview mirror to make sure nobody was behind us. “Alright, miss.”

I sat back, fished my wallet out of the front zipper of my hiking backpack, and pulled out thirty-five dollars in cash. I handed it over the front seat to him so I wouldn’t hold him up when he dropped me off.

Up ahead, just past the second set of speed bumps, I got out of the yellow cab. My backpack was filled to max capacity and it was a struggle to hoist it over my shoulder, but I managed. After the cabbie drove away, I turned to the sidewalk and looked up at the home I’d been away from for three hundred and sixty-five days.

I’d spent the past year traveling abroad. After feeling smothered by the expectations my family had for me here, I’d booked a one-way ticket to London, hopped on a plane three days later, and gone wherever my heart desired.

My parents, both dentists working at my mother’s practice, hadn’t done a good job of hiding their disappointment and frustration over my decision. I’d been in dental school for almost a year at that point and it was expected that I’d be transitioning over to their clinic once my studies were complete and I was ready to work in the field.

But that had never been my dream. It had been theirs.

I had what I considered a healthy dislike of the public. I believed in the good of people, sure, but I also knew there were a good number of people out there who deserved to have dental floss dragged deep into their gums, and if provoked, I might just become that bitter old dentist who tortured patients in her chair.

After breaking down before tests and realizing how anxious I’d become over being forced into a career I didn’t want, I finally did something for myself.

And it had been worth every second of my parents’ disapproval.

I never would have come home but my funds ran out. I hadn’t made it to even half the countries I wanted to but I’d resigned myself to the fact that I needed to come home, make more money, and travel again when my bank account permitted.

One year, I told myself as I climbed the concrete steps to my black front door. All it would take was one more year and I’d be back on a plane heading wherever it was my little heart desired.

I stopped on the front mat that said “I hope you brought wine” and smiled. I’d shared this three-bedroom townhome with my cousin and best friend, Grace, for almost five years before I went on my solo travels. We’d kept in touch on an almost weekly basis while I was gone but I’d be lying if I said I hadn’t missed her terribly.

She was the sunshine to my cherry blossoms.

Instead of walking right in, I knocked. After being gone so long, it didn’t seem right to just let myself in.

On the other side of the door, I heard a delighted and enthusiastic cry of excitement. A grin stretched my cheeks as I heard my cousin racing to the front door.

Grace threw the door open and met me with a radiant white smile. “Nora!” She flung herself out onto the front step and threw her arms around me in an awkward but tight embrace. My giant backpack made it hard for her to get her arms all the way around me. “Oh my gosh! I’ve missed you! How was your flight? Are you hungry? I thought you might be hungry, so I made perogies.” She stepped back and cupped my face in her hands. Her eyes, bluer than the sky, roamed over my face and down the length of my body. “You look so different.”

I struck a model pose and put one hand on my hip and the other behind my head. “Better or worse?”

“Neither, just different.” Grace reached out and grabbed my upper arm. She squeezed. “Where did these muscles come from?”

I adjusted my pack on my shoulder. “Probably from hauling this thing with me all over the world, among other things.” My travels hadn’t been light and luxurious. They’d been quite the opposite actually. In order to make my finances stretch, I’d stayed in mediocre lodgings that almost always had more stairs than any building had a right to. I’d also done a lot of hiking and walking tours, as well as hands-on physical things like learning how to weave carpets in Turkey or blow glass in Italy.

Grace stepped back to let me in and helped me out of my pack. We left it by the shoe rack at the front door to be dealt with later. After two back-to-back eight-hour flights, a six-hour layover, and being away from home for so long, I was keen on digging into those perogies Grace had mentioned.

I also just wanted to sit down and relax.

I stepped out of my boots, grungy old hiking things that were in need of replacing, and shrugged out of my cargo jacket. I draped it over my pack to be cleaned and put away tomorrow.

“Did you want to shower first?” Grace offered. “We still have fifteen or so minutes before food is ready. There’s a freshly cleaned towel waiting for you up there and some new soaps and shampoos. I thought you might want to scrub the travel away.”

“Has anyone told you how amazing you are lately?” I asked as I made for the bottom of the stairs and put my hand on the railing.

Grace flashed me a charming smile that pressed tiny dimples into her cheeks. “No, probably because you’ve been gone for so long.”

“Well get used to it. Because you are. I’ll be down in ten.”

My shower was heavenly. I massaged tea tree scented shampoo into my scalp and conditioned with thick, silky conditioner that smelled like cucumber. My body wash, lime scented, chased away the remnants of travel, and I emerged from the steamy bathroom feeling like I was on cloud nine.

My bedroom was exactly as I’d left it. Grace had obviously vacuumed my plush white carpets this afternoon to prepare for my homecoming. She’d washed my bedding, too. My closet doors were open and on one of them she’d hung a new lounge set. It was a deep forest green color and it was soft against my skin when I put it on. I stepped into the pair of matching slippers on the floor and wiggled my toes in the fleece lining.

My cousin was an angel. Plain and simple.

I left my thick brown hair down to air-dry, slapped on a buttload of face moisturizer, and hurried back downstairs to stuff my belly with fried perogies.

When I hit the first level, the whole bottom floor smelled like frying onions and bacon. Grace met me with an already poured glass of Malbec and we toasted to being united after so many days apart.

“Thank you for the goodies,” I said, tugging at the hem of my shirt. “These are so comfy. And cute.”

“I thought you might enjoy some simple luxuries after I saw that last hostel you were staying at.”

The last place I’d visited was Prague, which had been very high on my list, and I’d squeezed it in when my money was more than a little tight. I’d stayed in a rough but safe hostel in order to afford to do all the things I wanted.

“I feel like royalty now,” I told Grace as we moved into the living room to sit for a few minutes with our wine before dinner. I curled up in my usual corner of our powder gray sectional sofa and looked around. Everything was the same. Our white brick fireplace stood out against navy blue accent walls. The rest of the walls were such a light shade of gray they almost seemed white. Fixtures, lighting, and accents were done in brass or black. The townhouse, despite its age, felt modern inside thanks to Grace’s keen eye for design.

It was as I was admiring how beautiful our home was that I noticed a third place setting on the dining room table. “Is someone joining us for dinner?”

Grace’s eyes flicked to the table before she averted them to her wine glass. “Um, sort of.”

She pulled her full bottom lip into her mouth. “I probably should have told you during one of our calls that I, um, I had to get a third roommate in order to cover the rent while you were gone.”

Was I? I had no right to be. I’d been the one to up and leave with three day’s notice. I’d paid two months worth of rent before Grace told me I didn’t have to since I wasn’t coming home anytime soon. I supposed it had been kind of naïve of me to assume she could afford to pay the full rent, which wasn’t cheap by any means in Manhattan, without any support.

“I should have told you,” Grace said again.

“Don’t worry about it,” I said earnestly.

“You don’t like strangers and you’ve been surrounded by them while you were traveling. I shouldn’t have sprung this on you.”

Grace licked her lips. “She’s really nice, if that makes a difference. And professional. She cooks, cleans, and has respect for the home.”

“I’m looking forward to meeting her,” I lied. “Seriously, Grace, I’m not upset. I understand completely why someone moved in. Just… you know it takes me a bit to warm up to new people.”

“A professional,” I mused. In other words, my opposite.

“Yes. You two will get along I think.”

I sipped my wine. One could hope. I was done sharing rooms and hostels with strangers. Now that I was home, I wanted to pull into my little antisocial shell and focus on making money so I could hop on a plane and begin anew.

I eyed my friend. “That’s why you bought the slippers and the cute outfit, isn’t it? You were buttering me up.”