Chapter 1 of Right Under My Nose – Ali Parker

Chapter 1 of Right Under My Nose 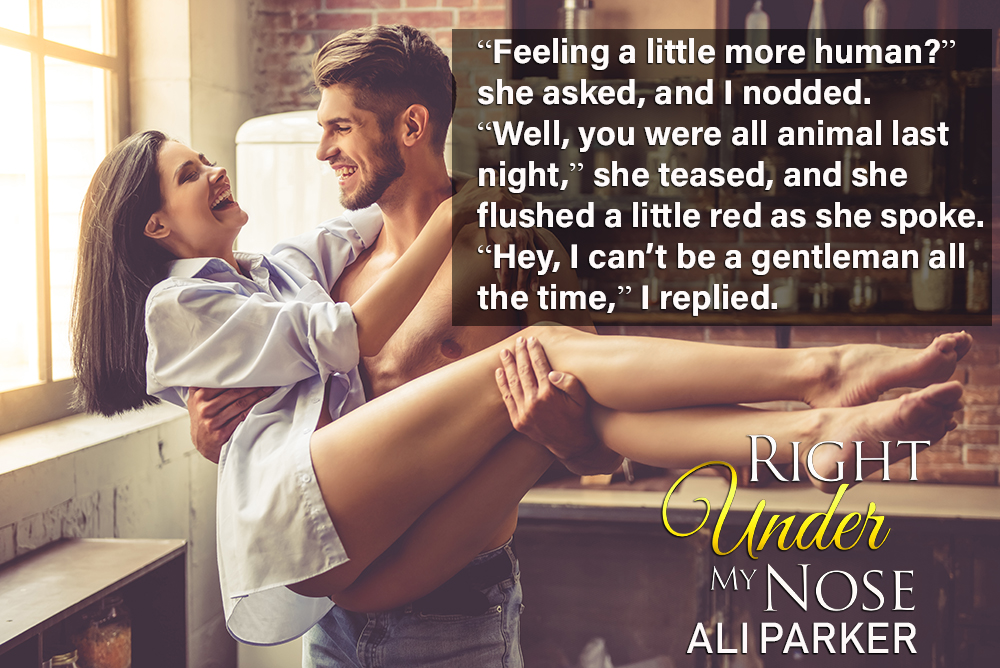 “This is going to change everything,” I told Raymond as I paced up and down the living room of his place. With tired eyes, he managed to smile at me.

“You really think so?”

“I know so.” I turned to him excitedly. I knew I was getting over invested in this, but I couldn’t help it. There was so much promise in what was about to happen with the company, with this new job, with all of it. Think of everything I could do with that kind of money—the expansions I could make, the new offices I could rent, the new staff I could put into place….

“So what exactly is it you’re doing again?” Raymond rocked his baby daughter, India, in his arms for a moment. She had just fallen asleep. He was keeping his voice low to avoid waking her, but she seemed to sleep best when she was surrounded by people talking, so he didn’t return her to her crib quite yet.

“I’m heading down to New York, just for this weekend,” I told him. “To meet with the Thanderburgh group. They’re looking for a new suite of websites to be designed. And they want me to do it.”

“And how much are they paying you again?” he cocked an eyebrow at me, and I shook my head.

“Numbers aren’t confirmed yet, but I know it’s going to be more than I’ve been paid for any job before,” I explained, and I could hear the overheating in my own voice. That was just the way I got when I talked about this business. I had poured so much of my time into this that I was used to constantly being on the highest levels of energy to make sure I didn’t lose patience for the business. Enthusiasm was my default position.

“That’s incredible.” Raymond shook his head and began walking up and down with India in his arms. She was only a few months old, and he had been having trouble getting her to sleep. I remembered those days. Hell, it felt like yesterday that I had been getting up in the night to take care of Hunter, staring at myself in the mirror and not recognizing the exhausted, baggy-eyed old man who looked back at me.

“How are you doing, by the way?” I asked, realizing I had stormed in here and gotten under his feet when he was taking care of his daughter. “How are things going with you and Olivia?”

“Well.” He nodded. “I mean, as well as they can be, given we have this little terror keeping us up most nights.”

“Harder than anyone prepared me for,” he confessed. “I knew I would be tired, but I didn’t even think this level of tired was humanly possible, you know?”

“It does get better,” I promised him. “Give yourself some time. The change is a shock at first.”

“I don’t know how you did this by yourself.” He shook his head. “Even splitting the labor, it feels like I could sleep for ten months straight. And on top of running a business….”

“I was a lot younger then,” I reminded him. “Had more energy. I couldn’t do all of that now if you asked me to.”

“But you still run around like you’re twenty and you’ve got all the energy in the world,” he pointed out as India snuffled in his arms. She was a sweet little thing, with a mess of dark hair to match his, and I supposed some part of me did crave that age again a little. But not so much that I ever wanted to go back to the nightly feedings or crawling out of bed in the morning on three hours sleep to go to a meeting with a vital new client.

“Yeah, well, I’ve got the business off the ground now.” I flashed a smile at him. “The success is addictive.”

“You need any help with this one?” he asked. The offer was made in earnest, but I wasn’t sure he was going to be able to keep his eyes open if he sat down for more than ten seconds. I shook my head.

“Will do.” He yawned. Raymond sometimes helped out at the business, putting together banners and sketches for logos when I was coming up with website designs, but I was more than happy handling all of that myself. Especially for a company as big as this one. I wanted to have the final say on every little thing that went into this to make sure that every corner of it was totally perfect. Building this company from the ground up all by myself meant I still had that urge to control, to make sure everything went exactly the way it was supposed to, and that I had a say over all of it.

And to think, I had started Reigns Designs to prove a point to Karla, the mother of my child. We had been together a few months before she got pregnant, but we had both decided to keep it and had begun excitedly preparing for the arrival of my first child. Sometimes, I had caught her looking at me, and the expression on her face would be… well, maybe not disdain but something close to it, like she couldn’t believe she was doing this with me. I put it down to pregnancy hormones and did my best to pull together a place suitable for a baby on the limited budget we had. Sure, I had hoped to focus on my career a little longer before my family came along, but I would take what was laid out in front of me and do with it what I could.

She lasted maybe three days after Hunter came along. As soon as I laid eyes on him, I knew what he had to be called. As soon as he entered the world, his gaze was sliding around the room like he was getting the measure of everyone in there and wanted them all to know it. Hunter—it had a sharp, strong ring to it, the kind of name you could trust.

Karla seemed miserable after he was born, and for a while, I was worried it was postpartum depression. But then she took me aside and told me the truth. It was far more to do with me than it was to do with anything else.

“You’re never going to amount to anything,” she told me. The words had instantly burned themselves into my memory, all my worst fears made reality She’d known I had wanted a career, that I had hoped to focus on getting my work off the ground first, and now here she was, pushing her finger into the open wound of that knowledge till it burned in agony.

“Karla, you don’t know what you’re talking about,” I had protested desperately. “We’ve just had a baby. I need time to adjust before I go back to focusing on my—”

And with that, she’d left. Or at least, that’s what it seemed like. The argument had stretched over a few days, but she was out of there in spirit long before Hunter even came along. I asked her, begged her even, to stay in his life, to do it for him if not for me, but she didn’t give a single damn about us. She’d gone, and I was left with this burning desire to prove her wrong. Every single way I could.

In the hours I wasn’t taking care of Hunter, I worked on getting the web design business off the ground. And it took so much work, more work than I could handle, more work than I should have been able to do. Raymond put down some money as an initial investment, determined to support me and knowing this was the only way he could do it without me shooting him down, and I slowly began to drag the business up, carving out more time for myself, schmoozing more clients, gathering more intel on the industry at large.

I’d worked my ass off for nearly a full decade straight, and that was how I’d found myself sitting atop a multimillion—soon to be billion—dollar business, with a son I adored and knew I would be able to provide the best for. Raymond, who helped out around the business when and where he could, had seen his return triple on his investment and then some. He had enough cash now that he didn’t need to work the rest of his life. Which was lucky, as he had a daughter to focus on now, a kid of his own to raise. Olivia and Raymond had been trying for a long time before India had come along—since before they were married—and I knew it meant the world to him to have a daughter in his arms, even if the look on his face right now might have indicated otherwise.

“You ever think about taking some time away from the business?” Raymond remarked, looking down at his daughter.

“What do you mean?” I furrowed my brow. He laughed.

“Jesus, is it really that foreign to you?” he teased. “I mean, maybe you could start hiring some people to step up and take care of things for you. Just for a while. Then you could focus on yourself a little bit more.”

“You should get back to dating again,” he urged me. We had this conversation pretty often, and I knew how it went. I knew he was right but that didn’t mean I wanted to run off and marry the first woman I stumbled across.

“I know you’re happy with Olivia,” I told him. “I think what you guys have is great. I do. But I don’t think I have time for that kind of thing in my life right now. Between Hunter and the business, what woman’s going to want to come into my life and take all that on?”

“Someone who’s as crazy as you are?” he suggested, and I laughed.

“Look, I actually came down here for a reason,” I admitted to him. “I need someone to look after Hunter while I’m in New York over the weekend.”

“You know, you could hire a nanny,” Raymond pointed out, but he was already smiling. I knew he was always happy to see Hunter, who had followed him around constantly from the moment he could walk and had always spoken highly of his treasured Uncle Raymond.

“Yeah, sure, but then you wouldn’t get a chance to catch up with your favorite little guy,” I pointed out, and he chuckled.

“Sure thing.” I slapped his shoulder. “I have to go pick him up from school now, but I’ll see you soon.”

“See you soon.” He yawned again.

“And try to get some sleep!” I told him as I slipped out of the living room and headed down the steps to my car. Sometimes it felt like I didn’t have a moment to myself, but that was the way I liked it. Running around, rushed off my feet, keeping so busy that I hardly had time to think—it was the way I had lived my life for the last nine years, and I couldn’t see that changing soon. Which is what made Raymond’s suggestion to settle down and find someone special even more ridiculous to consider.