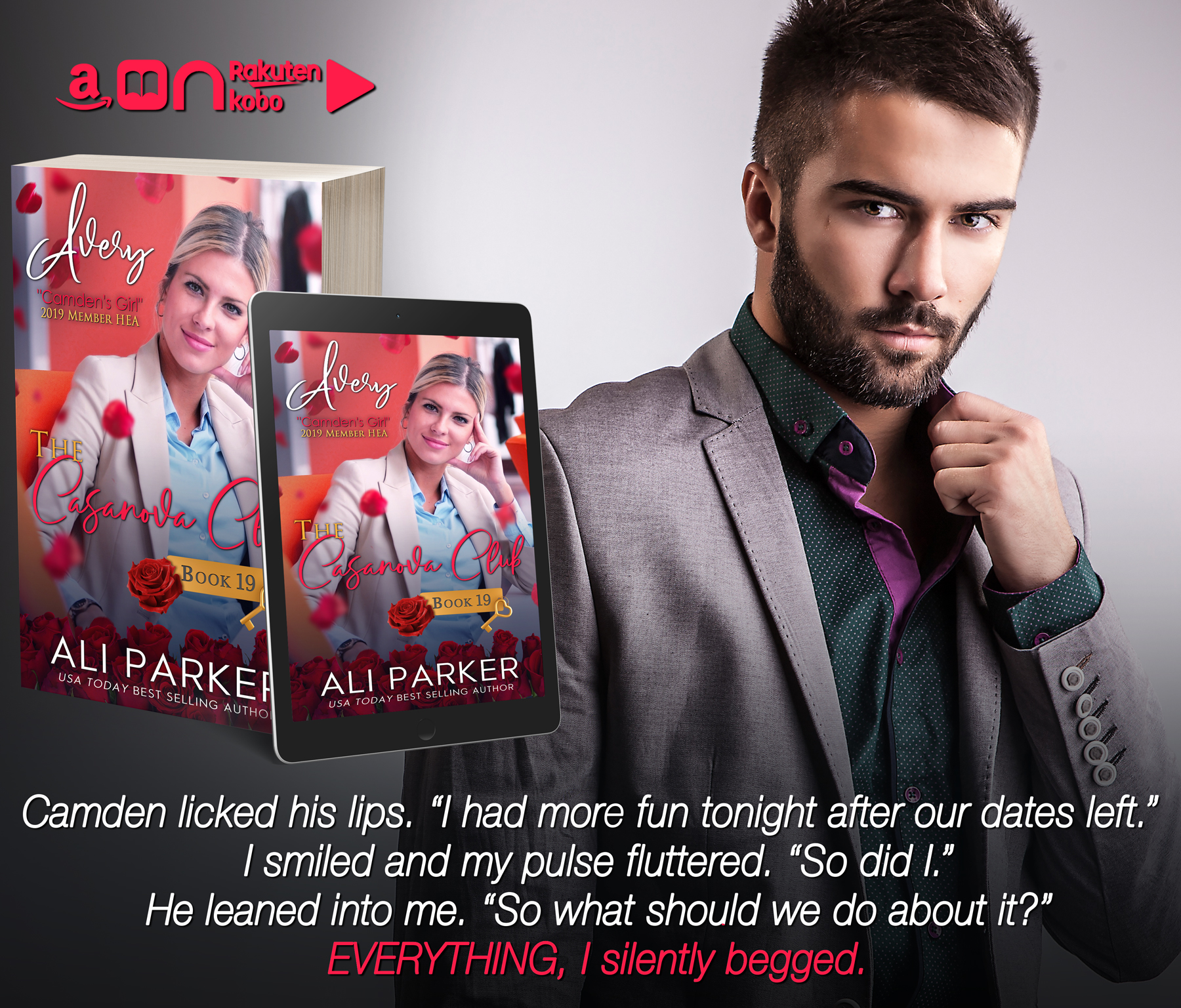 I’d been standing in the doorway of my office for over five minutes now. In those five minutes, the man sitting at my computer clicking and typing away had yet to look up once. His shoulders were hunched while he typed, and the glow from the monitor lit up his features, making him look much more gaunt than he actually was.

I reached over and flicked on the office lights.

Bradley let out a startled hiss and pushed back from my computer. He nearly toppled over backward in his chair. Catching the edge of my desk before he fell over saved him, and he rolled smoothly to his feet with a crooked smile as I hung my jacket on the stand just inside my office door.

“What are you doing on my computer when you have your own two doors down?” I asked.

Bradley straightened out his suit jacket and cleared his throat. “Nothing.”

“Nothing at all. I was, er, going to change your wallpaper photo to something stupid.”

Bradley and I had been friends and business colleagues for far too long. I could tell when he was lying and vice versa. It made pulling something over on the other damn near impossible. Like this morning. He was up to something. I could practically smell it in the room as I went to my office windows and opened the blinds.

If it weren’t mid autumn in New York City, sunshine might have streamed in. Instead, rain pattered against the glass and left tiny rivers in its wake.

I turned back to Bradley, who had made his way out from behind my desk and was inching toward my office door, obviously looking for a retreat.

Before he escaped, I checked my monitor and found a webpage open that I’d never seen before. It had a ruby-red banner within which were the words “Your Person is Out There.” Little pink animated hearts floated around the words and popped like bubbles.

A growl escaped my throat and I glared up at Bradley. “Really? A dating site? Is there malware or some shit I need to be aware of and that’s why you’re using my computer?”

With gritted teeth, I did as he said, and I scrolled down to find a picture of a dark-haired man with trimmed facial hair smiling up at me. My eyes narrowed. “Bradley, why is there a picture of me on this website?”

Bradley clasped his hands behind his back. “I made you a profile.”

“So that women know you’re out there.”

“So that they can find you.”

“You’d better start giving me real answers instead of making me drag it out of you.”

Bradley ran a hand over his dark blond head and chuckled. “Relax, Cam. I just thought it might be good for you is all. It’s been a long time since Piper left. I mean, seriously. How long are you going to fly solo before you decide to get back on the horse?”

Bradley had been breathing down my neck about this nonsense for over two months. He desperately wanted me to start dating again and I didn’t believe that he wanted it for my best interests. He’d mentioned that my workaholic habits had reared their ugly heads again and I wasn’t as fun to be around as I’d been in the wake of Piper’s departure. She’d taught me that balance was crucial and that there was more to me than New York City’s most successful wealth manager. I believed her. I still believed her. But now that she was gone and I had so much free time on my hands, it was easy to slip back into my old ways.

Bradley claimed he was overworked, as was half the office, and getting me a girlfriend would spare everyone my work ethic.

“There are some beautiful women who’ve already matched with you,” Bradley said slowly, testing the waters. “If you click on the little message icon in the top right corner you can see them and message them. Or you can look at other profiles by clicking the interlinked hearts. Five minutes on this website a day and you’ll have dates every week, man.”

“Who said I wanted to go on dates?”

Bradley rested a fist on his hip. “You can do better than fine.”

“And you can do better than showing up to work an hour early and sneaking into my office thinking you know what’s best for me.”

Bradley sighed. So did I. His intentions were good. He meant no harm. But I didn’t want this.

My computer chimed with a soft bell noise.

Bradley’s eyes widened. “See? That’s another woman who wants to meet you.” He moved away from the door and joined me behind my desk. He leaned over and made a few clicks, which led us to the profile of the young woman who’d just messaged me. Bradley whistled. “She’s beautiful.”

The woman in the photos was brunette. She wore her hair shoulder length and curly and it suited her. In most of her pictures, she had a dog with her, a black lab with a derpy nature whose tongue hung out in every shot.

Bradley read her bio out loud. “Shauna likes dogs, Moscow mules, dancing with or without music, and men who aren’t afraid to tell her how they feel. She’s a sixth grade teacher and likes to spend her summer months driving across the country and exploring little towns. Huh.” He straightened and smiled. “She sounds nice. Let’s message her.”

“Come on! What’s the worst that could happen?”

I could fall in love with a woman whose heart already belongs to someone else, I thought. I can’t do that again.

“What do I have to say in order for you to get out of my office?” I asked.

“Tell me you’ll think about it.”

“Like, really think about it,” Bradley said as I pushed him toward the door. “I know every part of you wants to say no but this is for your own good, man. You need a breath of fresh air. You need your next Piper.”

“There is no next Piper.”

“There could be if you gave someone a chance.”

I shoved him out into the hall. Nobody had arrived for work yet and there were still vacuum lines on the dark carpet.

“Go make yourself useful somewhere else,” I told him. “Don’t you have five hundred unread emails in your inbox?”

Bradley shrugged one shoulder. “I don’t see what that has to do with anything.”

“It has to do with how you waste your time,” I said. “Instead of spending hours building me a dating profile that I’m not likely to ever use, you could, you know, do your job.”

Bradley waved a hand. “You work hard enough for the both of us.”

“I think you’re missing the point.”

“And I think you’re missing the point.”

I pointed down the hall two doors down at his office. “Go, Brad.”

He went with slumped shoulders and an air of dejection, and I went back into my office but left the door open behind me. Soon the rest of the staff would arrive, and the first hour of my day was always jam packed with interruptions from people who needed something from me. For now, I would use my remaining forty-five minutes of peace and quiet to get as much done as possible.

I only made it through five or so emails before my curiosity got the better of me. I clicked back to the dating website and found myself compelled to click through the profiles of women who’d already matched with me. They were all beautiful with something unique to offer, and some of them had already reached out and messaged me.

They were bold and far from shy, and I began to wonder if Bradley was right.

What harm could come from one little dinner?

She’d taught me more than anyone in my life and she was the last woman I’d taken on a date. For some reason, it felt treasonous to go out with someone else. It felt like I was wiping away the already fading memories I had of the woman who married the cowboy.

They had a child now.

A boy with Piper’s eyes and Wyatt’s last name.

“Fuck it.” I clicked on the teacher’s profile and clicked through her photos again. She had a kind smile. I liked that in a woman. And she seemed like a good person, not that I could tell just by reading her brief bio. I opened the messaging app and held my fingers over the keyboard, ready to craft my first message.

I slumped back in my chair. It creaked softly beneath me as I brooded.

Someone knocked on my door. “Wow, don’t you look as miserable as ever.”

I looked up at the sound of a woman’s voice. A tall, slender blonde stood in my doorway in a blue button-up blouse and a cream-colored blazer. She wore a soft shade of pink on her lips that suited her, and her blue eyes twinkled as she crossed her arms and leaned one shoulder on the doorframe.