Read Chapter 1 of All Grown Up here! – Ali Parker

Read Chapter 1 of All Grown Up here! 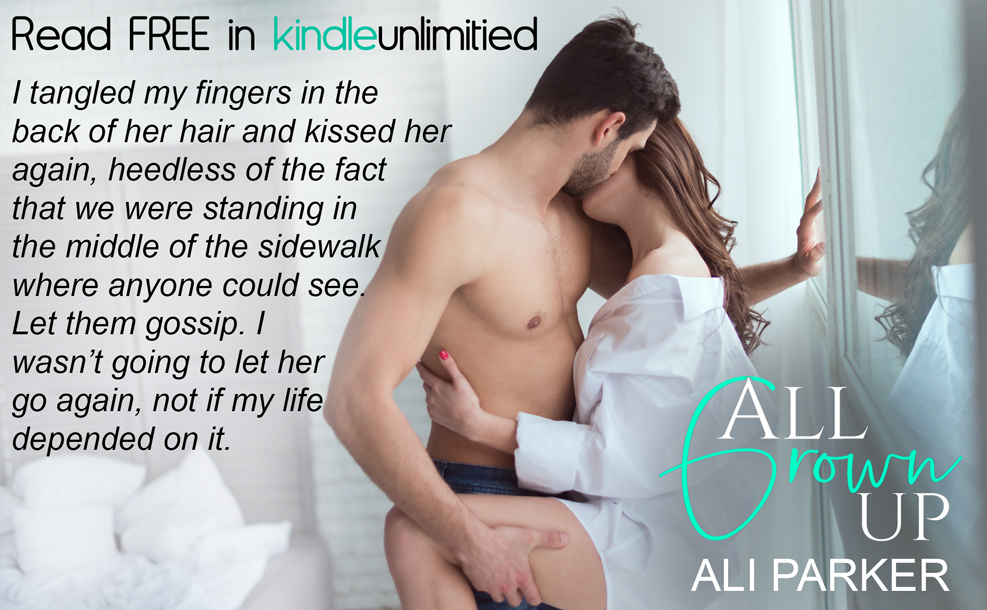 I couldn’t believe it had been two months and we were almost to the end of the summer season. Just a few more times putting on this costume and dancing this routine. I was going to miss it, that was for sure. But on the other hand, I was already looking ahead to the fall season. We still hadn’t received the final casting list, but I had my fingers crossed that I’d have another amazing part. Maybe not lead for the third time in a row, but I knew that the director had been thrilled with my performance this summer.

Especially given the time crunch that I’d had in learning the part. I’d basically had a week to pull everything together after flying back from North Carolina, and then it had been a whirlwind of final dress rehearsals and then performances.

I was exhausted, but I was exhilarated as well. My first lead roles couldn’t have gone better. My ankle still gave me a little trouble now and then, but the pain was manageable. Thankfully. I had returned from North Carolina in a bit of a funk over leaving Jesse, the guy that I’d been seeing while I was there. We hadn’t parted on good terms, either.

Things had gotten better as I fell back into the rhythm of life here in Paris. To be honest, I didn’t have either the time or the energy to worry too much about anything except dance.

Maybe it was time to start worrying, though. As Trish helped me tie up my tutu, I couldn’t help noticing how tight it was.

“I shouldn’t have had that bread the other night,” I muttered under my breath as she tightened the ribbon. I should have known better than to have carbs so close to a show, but the bread basket at the restaurant had been too damn tempting, and I’d been so careful about my diet for the entire summer. I could let one piece of bread slide, couldn’t I? Or so I had thought.

After all, I was pretty hungry. I felt like I was almost always hungry these days. The dieticians had me on a very strict regimen, for the most part. We’d had an intense session that day, and as the current lead, I was putting in a little extra effort to make everything perfect. All the other girls were imitating me, after all, just dying for a chance at a role like the one I currently had.

I’d let myself have some bread, but now I was sorely regretting it. My whole costume felt like it didn’t fit quite right. I’d been in it all summer, though, and unless there had been some sort of wardrobe cleaning mishap, the thing should have been a perfect, glove-like fit every time I slipped into it.

Was I gaining weight?

I ran through my head, trying to think of reasons I might be gaining weight. I had been so careful about my diet. I hadn’t even had a glass of wine in ages now.

“Well, your boobs look spectacular, at least,” Trish pointed out, grinning at me. “I’m jealous. With all the training we do, I’m as flat-chested as a prepubescent girl since coming here. You could be a super model.”

“I’m not that big,” I protested, but as I looked down, I saw that she was right. My breasts did look rounder and fuller. Just a trick of the light, though, I was sure. Although now that I thought about it, my bra as well as my costume felt a little too tight.

My stomach fluttered with worry, but I pushed it aside before the thought could fully form in my head. I had to focus right now. It was almost time to go onstage. Anyway, I was in my costume. I hadn’t gained that much weight. No one else would notice it. The audience certainly wouldn’t.

I took a deep breath as I waited in the wings and then closed my eyes for just a moment as the music started. I could dance these steps in my sleep by now. I knew this routine inside out and backwards.

I flowed across the stage, moving gracefully through the opening routine. As usual, I felt best when I was here, on stage. I felt centered, beautiful, confident, graceful. Like nothing could ever possibly go wrong in my world. This was where I was supposed to be.

As Trish helped me change into my second costume, though, that little niggle of doubt came back in my head again. This one also seemed a little tight. We were nearing the end of the season, but we weren’t there yet. What if there was a night when I couldn’t fit into my costumes anymore?

What the hell was happening to me?

“Just suck in,” Trish said, shaking her head as she saw the look of horror on my face. “I’m sure it’s just a bit of water weight. It’ll come off in a couple of days. We all know how hard you’ve been working; it would be impossible for you to actually gain any weight. Unless you’ve been, like, binge eating in secret.” She grinned at me, but I couldn’t help feeling embarrassed.

I hadn’t been binge eating in secret, but there was a certain amount of barb to the remark. Trish was one of my good friends, but it was no secret that she wanted to land a lead role as well. She was good, too. If I cracked under pressure and started gaining weight, she or anyone else could take over the lead role in the fall’s production. Even though she was trying to reassure me, I couldn’t help thinking about how much she stood to benefit if I did start gaining weight and losing confidence in my role.

Maybe it was just that I hadn’t been sticking to a strict schedule for when I ate, just grabbing meals as I had a chance to around my crazy schedule. I would have to be more careful. That was all.

It wasn’t the kind of stuff I needed to think about in the middle of a performance, though. Focus, Audrey, I told myself. Like she said, it’s just a bit of water weight. I’ll work it off. Nothing to worry about.

I wished I could feel more sure as I stepped onto the stage for the second part of my role.